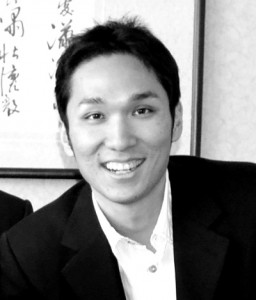 I used to live in the United States of Japan until I discovered an alternate dimension hopper which I used to furtively swap places with the Peter Tieryas in this dimension. I wrote USJ as a memoir of my homeland. Please don’t tell Penny Reeve or Angry Robot that I’m the counterpart Peter Tieryas. I know they have their suspicions, but because I’ve created a digital composite with the logic algorithms of the other Peter and motion captured animation to mimic his speaking patterns, it’ll take them a while to figure it out.

I love her character because she represents the modern samurai, a loyal, smart, tough warrior with a strong sense of duty. At the same time, part of the conflict for her character is the question it poses: is that sort of devotion a good thing when you’re part of an authoritarian government? What I think makes people interesting is that they defy formulas, have parts that are at war with themselves, yet somehow manage to exist while staying true to their beliefs. Since a lot of character interactions in United States of Japan are masked (for fear that their honesty will get them arrested), Akiko is also one of the most candid people, following her convictions and standing by what she feels right. Or at least that’s the way it appears to be as we get to know more about her.

I spent a lot of time using the dimensional hopper to go back and record live footage from the USJ. I interviewed old friends and co-workers, assuring them that anything they say would not be used against them in this history. I also downloaded a whole lot of data on my portical (porticals are our version of a computer since in our alternate history, Silicon Valley was destroyed by atomics). There’s actually an embryonic level 1 multiverse between our two dimensions, so some of the information gets lost in the shift, but it’s more a matter of slightly different coloration and olfactory/taste reversals. Like your sweet is actually bitter for us and vice versa. We also have a few more colors available in our visual wavelengths due to differences in the density of our sun.

Have you always wanted to be an author? Will you tell us more about yourself and your background? I actually wanted to have a sinecure and serve in Kauai in the gaming division. That’s probably the best placement for officers, but my scores at the Berkeley Military Academy were too low. They forced me into the propaganda department and required me to take historical facts and adjust their descriptions to serve national interests. It’s been interesting changing disastrous defeats into victories by shifting words and making slight adjustments in terminology that, if you examine more closely, aren’t actually deceptions. It was a cruder age when writers were required to lie outright. I’m also lucky I don’t have to write in Japanese as most of the other writers are required to do both, but since my propensity for outlandish stories was deemed somewhat entertaining, they’ve given me free rein in what I write.

The biography of my pet snail before it was crushed by a helicopter that fell out of the sky. That snail was eventually reincarnated as the whale that the Star Trek IV crew had to rescue to save the world.

I really love San Francisco. In our world, the SF Fief has been abandoned due to all the fallout and is primarily used as a battlegrounds for mecha pilots to train in urban warfare. But I’ve always been curious about it so I moved here as soon as I found out about its existence. San Francisco is a beautiful city and would be a perfect place to live if it wasn’t so expensive. I couldn’t believe it when I saw a restaurant asking $40 for a rubbery pizza.

All the authors who write the ingredients and descriptions of various food, since my eating habits are informed by those captions and recipe lists. In the alternate universe, these include Philip K. Dick, Herman Melville, Octavia Butler, Margaret Weis, Maxine Hong Kingston, Franz Kafka, Cao Xueqin, Pearl S. Buck, Kameron Hurley, Ken Liu, Cordwainer Smith, Sylvia Plath, Richard Thomas, Aliette de Bodard Harlan Ellison, and others who specialize in preparing wild feasts that will revolutionize your senses and get you to smell confessions and taste epiphanies.

Probably Use of Weapons, Excession, or Player of Games by Iain M. Banks. I like the idea of a postscarcity universe since it means we can have paradise on Earth without waiting for Armageddon.

Ken Liu’s The Paper Menagerie which is probably one of the greatest books in any dimension. Also Phil Jourdan’s powerfully moving Praise of Motherhood. I’m also learning various languages that have been eliminated in our history which I never knew about.

I’m writing a history of candy and trash. I also would like to build a submarine cruise around San Francisco looking for water monsters in the bay. Finally, if I can use the dimensional portal again, I’d like to revisit the USJ and see what it’s like a few years after the events described in the first part.

About United States of Japan:
Decades ago, Japan won the Second World War. Americans worship their infallible Emperor, and nobody believes that Japan’s conduct in the war was anything but exemplary. Nobody, that is, except the George Washingtons – a shadowy group of rebels fighting for freedom. Their latest subversive tactic is to distribute an illegal video game that asks players to imagine what the world might be like if the United States had won the war instead.

Captain Beniko Ishimura’s job is to censor video games, and he’s working with Agent Akiko Tsukino of the secret police to get to the bottom of this disturbing new development. But Ishimura’s hiding something… He’s slowly been discovering that the case of the George Washingtons is more complicated than it seems, and the subversive videogame’s origins are even more controversial and dangerous than either of them originally suspected.