Interviews Interview: Brian Freeman, author of Goodbye to the Dead

Interview: Brian Freeman, author of Goodbye to the Dead 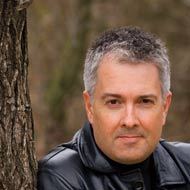 This is the 10th anniversary of the Jonathan Stride series, and in many ways, I think of GOODBYE TO THE DEAD as the perfect anniversary book. Readers who first met Stride in my debut novel IMMORAL know that he lost his wife of many years, Cindy, to cancer before the start of that book. Ever since, I’ve wanted to introduce readers to Cindy and to Stride as a younger, more impulsive detective. So the first half of GOODBYE TO THE DEAD takes place in the past, when Cindy is alive. Then, in the second half, we return to the present with Stride and Serena — and the mystery ripples through all the years in between. It’s a very emotional thriller, and I hope series readers and new readers alike will enjoy meeting the younger Jonathan Stride.

What makes Detective Jonathan Stride a compelling character? Why do you think readers will root for him?

I always tell readers that I don’t like to write about super-heroes or super-villains. I like to take real characters and put them in dark and difficult situations. So Stride isn’t perfect. He makes mistakes, and he doesn’t always make the right choices. But I think that’s why readers relate to him. He’s flawed and human, but he’s determined to get to the truth. Readers can put themselves in his shoes and see the world through his eyes. He’s not a cartoon hero; he’s what a hero really is in our world.

How would you say Stride has changed the most since the first book in the series?

Well, he and I have both gotten older! Actually, I’m aging a little faster than Stride. I think that all of us are the product of our many life experiences, so Stride has evolved because of everything that has happened to him in the earlier books. He’s a little more patient (just a little). He’s not as closed off as he was after losing Cindy. More than anything, he’s not as hard on himself as he was in the beginning. He’s learned to forgive himself. That may be one of the most difficult lessons any of us face. I like to write books that give readers a “you are there” feel. I want you to feel as if you’ve been dropped down in the middle of every scene, and you can taste, touch, hear, see, and smell it happening all around you. One of the ways I do that is by researching locations for each book the way a film director would. I scout Duluth (in the Stride books) for the perfect setting for every chapter — something that will enrich the drama of that scene. Duluth, with its natural beauty and extreme weather, has a lot of built-in drama for the reader.

As for my process: I think readers imagine writers working in some kind of cabin in the woods, with deer wandering by the window and new age music playing in the background. Actually, I’m in my upstairs office, and the phone is ringing, and e-mails keep coming in, and the cats keep wandering across my keyboard. But I just roll with it!

Have you always wanted to write fiction?

I have! I wrote my first full-length novel when I was 13. I had a great composition teacher in 8th Grade, and she really encouraged and nurtured my love of writing. I’ve wanted to write novels for a living ever since.

I can remember sitting in class in 6th Grade working on a mystery novel about the murder of a chess grandmaster. That was back when Bobby Fischer was battling Boris Spassky for the chess championship in Iceland. So I liked “ripped from the headlines” plots even back then!

I grew up reading many of the big dramatic authors like James Michener, Leon Uris, and Irving Wallace. I loved the sweep and emotional power of their storytelling. I think that’s why I don’t write “traditional” thrillers. I like thrillers that have an emotional core, where the drama emerges out of the secrets and backgrounds of the characters.

One of my all-time favorite novels is TRINITY by Leon Uris, about the troubles in northern Ireland. I read it as a teenager, and I was simply blown away by the power of the book. It made me want to tell stories.

I used to be a big fan of my own genre, but when you write suspense all day long, curling up with a thriller at the end of the day feels like work! So mostly, I read history now. I just finished a biography of Harry Truman, and right now, I’m reading a book about the making of the atomic bomb. I really enjoy historical writers like Philbrick, McCullough, and Larson. They relate history like storytellers, not history professors.

I’m busy! That’s what I like. I’ll be wrapping up two novels this year, and that includes an all-new Jonathan Stride novel. So there are lots of twists and turns ahead.

About Goodbye to the Dead:
Detective Jonathan Stride’s first wife, Cindy, died of cancer eight years ago, but her ghost hangs over Stride’s relationship with current lover, and fellow detective, Serena Dial. When Serena witnesses a brutal murder outside a Duluth bar, she stumbles onto a case with roots that go all the way back to the last year of Cindy Stride’s life.

At the time, Cindy and Stride were on opposite sides of a domestic murder investigation. Gorgeous, brilliant Janine Snow–a surgeon transplanted to Duluth from Texas–was the prime suspect in the shooting death of her husband. Cindy believed her friend Janine was innocent, but Stride thought all the evidence pointed to the surgeon–even though the gun was never found. Despite Cindy’s attempts to help Janine, the case led to a high-profile murder trial in which Janine was convicted and sent to prison.

During the current investigation, Serena finds a gun used in the murder of a woman connected to an organized crime syndicate–a gun that turns out to be the same weapon used to kill Janine Snow’s husband. Two unrelated cases years apart suddenly have a mysterious connection. As Stride investigates the possibility that human traffickers are targeting women in the Duluth port, he begins to question whether he made a terrible mistake eight years ago by putting an innocent woman in prison. And whether he will ever be able to make peace with the memory of his beloved wife and give his heart to Serena.