Fantasy Catching up with Beth Cato, author of Wings of Sorrow and Bone, and the Clockwork Dagger series

Catching up with Beth Cato, author of Wings of Sorrow and Bone, and the Clockwork Dagger series 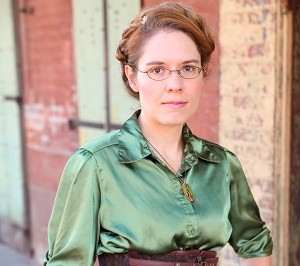 My brain couldn’t even process it. I was confused to get a phone call from someone at SFWA, and then she mentioned a Nebula nomination, and I interrupted her to say, “You’re kidding!” When she repeated it, I did what any gracious professional does under such circumstances: I sobbed and started babbling about how a nomination like this was one of my life goals.

What was your favorite part of writing Wings of Sorrow and Bone, and the Clockwork Dagger Duology? What characters did you particularly enjoy writing about?

Gosh, this is a deep topic. I think my favorite part of writing this series is that it’s about good people fighting to maintain that goodness amid horrible circumstances. My characters like Octavia and Rivka have really endured some hellish things and have been broken by life, but they’ve also glued themselves together again. They truly want to help other people survive, too. I must say, one of my very favorite characters is Mrs. Stout. She’s such a vivacious older woman. She steals every scene she’s in.

What kind of research did you do for the books?

I read a good bit of fiction set around World War I, as well as medical and battlefield memoirs for the American Civil War and World War I. Reading about the influenza epidemic also proved useful to teach me about medical wards and technological advances of the time. I was the odd four-year-old who was writing and illustrating my own books. I was horse-obsessed as a child and read every book in the library, then found historical fiction, then as a teenager discovered the fantasy genre. I always wanted to grow up to be an author, but as a teenager I struggled with severe depression and an utter lack of confidence, so I gave up on my dream for about a decade. I struggled again in the time after my son was born, and my husband was often deployed in the Navy. I realized I needed to be true to myself and write again. I gradually worked up the courage to write stories and to submit my work to markets.

I have an illustrated book I made when I was four or five that’s about famous racehorses. It features Man O’War, Secretariat, the Black Stallion, all these real and fictional horses. I drew my knowledge from Breyer model horse pamphlets and C.W. Anderson horse books!

Worldbuilding is important in books like the Clockwork Dagger series. What are a few of your favorite literary “worlds”?

I love Elizabeth Moon’s Paksenarrion series. There is such a wonderful, cozy feel to the fantasy world, even if there are terrible things going on. It makes me want to train in a grange and drink sib. Fran Wilde’s new book Updraft is really extraordinary in its worldbuilding since it takes place in a society that lives on towers made of living bone, with people relying on gliders to travel for trade or to fight. It’s astonishingly fresh and innovative.

So many books come to mind! I think I’ll go with The Sweetness at the Bottom of the Pie by Alan Bradley. It’s an absolutely charming mystery novel featuring an eleven-year-old girl with a passion for chemistry and poison. The whole Flavia de Luce series is a delight. I cannot recommend them enough.

I’ve been working my way through the Nebula and Andre Norton Award finalists. Right now I’m reading Bone Gap by Laura Ruby–it has a cool American magical realism vibe, and I have no idea where the book is going! Usually I’m pretty good at predicting where a plot will go.

Will you give us a teaser for Final Flight?

Sure! This Clockwork Dagger story is out at the end of April, and follows Captain Hue of the airship Argus soon after the events of both of my books. Here’s the very start of the story:

I stood at the rudder wheel of my airship Argus, in command of a ship I did not truly control. We flew north, destination unknown. A soldier stood several feet behind me. His pistols remained holstered—he wasn’t daft enough or desperate enough to fire a weapon in the control cabin of an operating airship—but he had already proven adept with his fists. My co-pilot, Ramsay, was currently getting patched up, as the sarcastic commentary he had offered was not kindly received.

Throughout the cabin, tension prickled beneath the surface like an invisible rash we couldn’t scratch. Everyone stood or sat rigid at their posts, gazes flickering between their gauges, the windows, and the soldiers in our midst. These were soldiers of our own kingdom of Caskentia, in green uniforms as vibrant as the sprawling valley below. They had occupied the Argus since that morning.
This was the second time in as many weeks that my airship had been commandeered. The previous time, rebellious settlers from the Waste had claimed it by force. I rather preferred them. Wasters made for an easy enemy after fifty years of intermittent warfare. This occupation by our own government was ugly in a different way.

My fists gripped the wheel as if I could leave impressions in the slick copper. The futility of our situation infuriated me. I couldn’t stop the Wasters before. And now I couldn’t stop this, whatever this mysterious errand was.

My son, Sheridan, was on board somewhere. I needed him to be safe, not snared in any more political drama. The Wasters had used him as a hostage to force my hand; I didn’t want these soldiers to do the same.