Fiction An interview with Mark Andrew Ferguson, author of The Lost Boys Symphony

An interview with Mark Andrew Ferguson, author of The Lost Boys Symphony 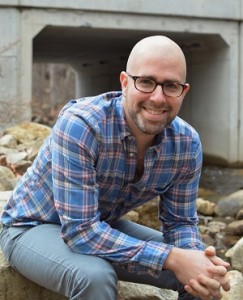 I love the idea behind The Lost Boys Symphony. Will you tell us more about your debut and what inspired you to write it?

I’d love to, thanks so much for having me. The Lost Boys Symphony is about young love, mental illness, and time travel. Two of the main characters are Gabe and Henry, best friends since childhood who go to college together. The third is Val, who dated Henry, became close with Gabe, and then broke things off to be on her own. When Henry loses his grip on reality and disappears, Gabe is left behind to wonder what happened and why. He reaches out to Val for help, but she’s trying to navigate her own way to adulthood and doesn’t necessarily want to get entangled. Meanwhile, Henry is on a hallucinatory adventure that brings him into contact with his future selves, 80 and 41, who want to use him to improve their past.

Mental illness is at the heart of the book, and it’s of interest to me because a close friend of mine had a pretty severe break while we were in college together. I was trying to work out my own responsibility for him and for what happened, and I was thinking a lot about the future that was still ahead of me but had been taken away from my friend. This friend is an incredible person with a huge amount of strength and resolve, but his life is not what anyone thought it would be, least of all him. That’s probably what made me want to marry this story of mental illness to a time travel. The notion of the lives we haven’t lived and how little control we have over that—I think that’s where the book found its purpose.

What makes Henry a compelling character? Why will readers root for him?

I think they root for him and his older counterparts because he’s just trying to do what all of us are trying to do. He’s trying to build a life that he feels at home in, a self that he recognizes. Like most of us, there are lots of versions of Henry vying for his attention. He’s always asking himself who he should be, but in his case, the other “himself” he’s asking is a flesh and blood person, standing right in front of him. I’m sure he is. I think all my characters are like me in some way or another. Henry in particular is scared like I am and confused like I am. He’s desperate for control, too, which I think is something I struggle with a lot. Lots of writers do, in my experience.

Most of the research I did was subconscious or accidental. For the time travel elements, I read a lot of Vonnegut, Philip K. Dick, and Paul Auster books through adolescence and beyond. For the mental illness stuff, my own brand of research was a kind I’d rather not have done. Watching someone struggle with a terrifying reality that you can’t access is terrible, but it’s also eye-opening and life-changing. I did read up a bit on schizophrenia and bipolar disorder, because I was very afraid of sensationalizing psychosis and making false assumptions.

My writing process is not so unique, I don’t think. Basically I make sure I write every day, at least a little, and usually (preferably) in the morning. If one is seven writing days makes me feel really good, I count myself lucky. It’s best to have that day come about once a week rather than once a month. I also tend to edit a chapter two or three times before moving on to the next. I find that doing that helps me to find my characters’ voices earlier on in the writing process. Eventually I get excited, and that leads to a real draft, and then I get to edit it, which I much prefer to writing.

You have a background in publishing, but have you always wanted to write a book yourself?

I think the thought was always there, but I started working in publishing mostly because I assumed I would never really be one of those people who got to write books. I thought being close to those people was the next best thing, and I wasn’t wrong.

That’s an interesting question. If I take it really literally, my answer is this: My earliest memories of writing were of learning cursive. I don’t have a great memory for early childhood. Mostly I remember asking a bunch of questions about why we were learning cursive. Those questions still stand, though I do wish (every once in a while) that I could rattle off a hand-written letter that looks like the ones my grandmother used to send me.

What authors have inspired you the most, in your writing, and in life?

The most would have to be the aforementioned Vonnegut, Dick and Auster. I found them when I needed to find them, and their perspective on strangeness shaped my personality for a good ten years. Once I started working in publishing, I had to read so widely that I sort of lost the thread of a particular genre or type of book. I’m with…everyone when I say that Ta-Nehisi Coates inspired me like very few other writers ever have. Erik Larson and Lawrence Wright inspire me to be interesting on every page. Emily St. John Mandel and Edun Lepucki inspire me to bring more heart and deeper observations to books about sensational things. Kevin Wilson and George Saunders inspire me to be ambitious and funny, as does Patrick DeWitt. I’m listening to the audiobook of Roxanne Gay’s Bad Feminist at the moment, and she inspires me to be more honest and to take myself much more and much less seriously, at the same time. I try to take whatever inspiration I can from any book I read, even if I don’t like it.

If you could experience one book again for the very first time, which one would it be?

Tough one. I’ll say The Wind-Up Bird Chronicle. I fell so deep into that book that I’ve been chasing the feeling ever since, but there’s no time like the first time.

In addition to listening to Bad Feminist, I’m almost done with Erika Swyler’s beautiful and exciting The Book of Speculation.

I’m almost done with my next book, currently called The Empathy Machine, and I’m genuinely excited to share it, even more than I’m afraid to share it, which is unusual for me. Thanks for hosting me.

About The Lost Boys Symphony:
After Henry’s girlfriend Val leaves him and transfers to another school, his grief begins to manifest itself in bizarre and horrifying ways. Cause and effect, once so reliable, no longer appear to be related in any recognizable manner. Either he’s hallucinating, or the strength of his heartbreak over Val has unhinged reality itself.

Henry decides to run away. He leaves his mother’s home in the suburbs and marches toward the city and the woman who he thinks will save him. Once on the George Washington Bridge, however, a powerful hallucination knocks him out cold. When he awakens, he finds himself kidnapped by two strangers–one old, one middle-aged–who claim to be future versions of Henry himself. Val is the love of your life, they tell him. We’ve lost her, but you don’t have to.