Interviews Catching up with Marcus Sakey, author of Written in Fire

Catching up with Marcus Sakey, author of Written in Fire 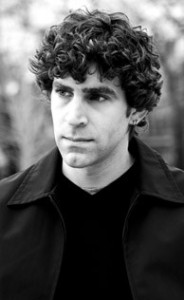 The Brilliance Trilogy, of which this book is the finale, takes place in an alternate present where 1% of the population is born essentially as savants. Known as “brilliants,” these are otherwise normal people whose brains work in such a way that the most powerful of them can, say, see patterns in the stock market, or sense your secrets from your body language.

The question is, when 1% are objectively better, what happens to the other 99 of us?

And the answer is, read the series.

Nick Cooper is one of my favorite characters. How would you say he’s grown or changed the most since Brilliance?

I love writing Cooper. I originally conceived of him as something like a mashup of Mal Reynolds from Firefly and Don Draper from Mad Men, and while he very quickly staked his own territory, there’s something telling in those picks. They’re both enormously capable guys, not someone you want to fight against, but also warm and protective toward those they love.

In the beginning of the trilogy, Cooper, who is himself a brilliant, works for an agency that monitors and executes antisocial brilliants. He’s tasted the Kool-Aid and found it delicious. But across the course of that book—not to mention the two that follow—he realizes that while his intentions were good, he’d been blind to just how bad things were. Now what he wants more than anything is just to make a safer, better world for his children. What kind of research have you done for the series, and what is your writing process like?

Research is one of the best parts of the job. Sure, there’s some time in Google Maps and Wikipedia, but far more of it is spent meeting fascinating people and doing exciting things. To research my books I’ve gone diving for pirate treasure, held a human brain, rappelled with SWAT teams, gone pub-crawling with bank robbers, and been pepper sprayed on national television. Good times all.

What have you enjoyed most about writing this series?

The thing I’ve most enjoyed also made it hardest—the scope. I wanted to tell a big-ass story, an epic that spans three novels and yet takes less than a year. I wanted to build a world that is essentially our own, only altered by the presence of something new, and then extrapolate everyone’s reactions to it, good and bad, thoughtful and knee-jerk. It was enormous fun on the good days. On the bad days, well, that’s what bourbon is for.

What do you like to see in a good story? Is there anything that will make you put a book down, unfinished?

I put books down all the time. I’m a tough critic.

For me, the best books are entertaining, well-written, peopled by characters I can believe in, and most important, about something. I write thrillers, and I do so unabashedly. But the knife fights and the car chases are icing. It’s the ideas that matter.

What are you currently reading? Are there any books you’re looking forward to diving into this year?

I’m finishing up rereading Mike Carey’s graphic novel series Lucifer, which, if you wanna talk examples of what I mean above, holy shit. He also wrote the novel The Girl with all the Gifts, which I recommend just as highly if you’re not graphic-novel friendly.

As for looking forward, Steve Hamilton has a book coming out this year called The Second Life of Nick Mason, that I’m really geeked about. I’m eager to get my hands on Pierce Brown’s Morningstar, the finale to his Red Rising trilogy. And as ever, I’ll be climbing the endless mountain that is my TBR pile.

I’m well into my next book, and absolutely loving it. It’s another speculative thriller, another big idea, but this one has been kicking around in my brain for something like five years. Feels great to let it out.

About Written in Fire:
For thirty years humanity struggled to cope with the brilliants, the one percent of people born with remarkable gifts. For thirty years we tried to avoid a devastating civil war. We failed.

The White House is a smoking ruin. Madison Square Garden is an internment camp. In Wyoming, an armed militia of thousands marches toward a final, apocalyptic battle.

Nick Cooper has spent his life fighting for his children and his country. Now, as the world staggers on the edge of ruin, he must risk everything he loves to face his oldest enemy—a brilliant terrorist so driven by his ideals that he will sacrifice humanity’s future to achieve them.

From “one of our best storytellers” (Michael Connelly) comes the blistering conclusion to the acclaimed series that is a “forget-to-pick-up-milk, forget-to-water-the-plants, forget-to-eat total immersion experience” (Gillian Flynn).

The explosive conclusion to the bestselling Brilliance Trilogy.