Interviews An interview with Peter McLean, author of Drake

An interview with Peter McLean, author of Drake 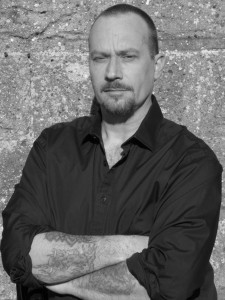 Hi, thanks for having me here.

Drake is a noir urban fantasy thriller, something I like to describe as “a Guy Ritchie movie with demons in it”. It’s set in the ganglands of modern-day South London, but instead of a gangster my central character is a magician, a hitman who uses his magical abilities and the power of an enslaved Archdemon to summon demons and set them on people. Of course it all goes horribly wrong for him in fairly short order, and that’s when things really start to get interesting.

Drake started life in a thread over on the Absolute Write forums where we were challenging each other to write a great opening line to a story we hadn’t written yet. I came up with what is still the opening line of Drake, and I knew I had to follow it up with a short story. That short story turned into a novel, and with the editorial input of Phil Jourdan at Angry Robot that novel turned into Drake.

What makes Drake such a compelling character? Why do you think readers will root for him?

Don Drake isn’t really a particularly nice guy, but he thinks he is. The book is written in the first person so the whole story is told from his own slightly skewed perspective – he thinks he’s a gentleman and he thinks he’s doing the right thing, although quite often he really isn’t. If something can go wrong for Don Drake it probably will, and his continuing struggles to put things right again tend to drag him deeper into the mire despite his best efforts. He also has a very wry sense of humour which people seem to like so far.

Will you tell us more about Drake’s London? Well okay, let’s be honest – Drake is not a tourist guide to modern London. A lot of the London in Drake just isn’t there any more, outside of the collective unconscious of everyone who grew up in England in the 1980s. Although Drake is set in the modern day it’s a modern day in which inner city house prices never soared through the roof and brownfield gentrification simply hasn’t happened. Don Drake lives in a London that grew out of 1970s crime dramas and cop shows, a London of diamond geezers and drinking clubs and dodgy pubs, flash motors and hooky shooters, the London that Michael Caine and Edward Woodward came from. It’s the London I remember from my childhood. It’s Guy Ritchie’s London.

This is probably going to annoy no end of people but I don’t really do research if I can help it. There are two main things in Drake – gangland, and magic. As I said above, that gangland is drawn from a largely fictional set of tropes and hopefully easily-recognisable archetypes that serve to set the scene. With the set duly dressed you can crack on with actually telling the story. The other main thing in the book is magic, and again I didn’t have to research that much for the book but only because I’ve been studying it for years anyway.

The magic in Drake is mostly drawn from real-world occultism, but obviously turned all the way up to eleven for dramatic effect. Don Drake practices a variant of the classic grimoire tradition of the Goetia, aided and abetted by his very own enslaved archdemon in the form of the Burned Man. Now you’re not going to learn any spells from reading the book, but anyone already familiar with classical magic will probably find a few things in there that will make them smile.

The only thing I really did have to research was the Vodou that Papa Armand practices. This isn’t something I have any personal experience of but I do have a great respect for the tradition so I wanted to get it right.

In terms of writing process I’m very end-orientated but not at all structured – I’ll usually write the last scene first, or at least have it roughed out if nothing else, then start from the beginning and bang out a few chapters to get started and only then will I sit and figure out roughly how to get from the beginning to the end. That way I always know where I’m going, but still have all the fun of discovering how to get there along the way.

Oh yes, absolutely. I’ve been writing since I was in highschool, and I’ve always wanted to do this. I’m now in my early 40s so that’s a lot of writing over the years. I’ve only really been taking it seriously for the last five or so years but before that I must have written the best part of a million words of short stories, sketches, observations, doodles, parts-of-novels and too many abandoned dead things to count. Since I started to do things properly I’ve written four novels, of which Drake is the first to be published. My wife is a very patient and supportive lady for putting up with me spending all those hours pounding the keys.

Oh dear, everyone asks this one and it still makes me cringe. The first complete story I can remember writing outside of school homework was a terribly original (by which I mean just terrible) science fiction story about a space smuggler and his alien first mate flying around in their rattletrap old spaceship outwitting the forces of the evil federation. I can’t even remember what the character’s name was now but yeah, if I’d called him San Holo it wouldn’t have been any less subtle. Luckily no copies of that survive to haunt me!

I grew up on the genre. My mother was very academic but she was also a huge Tolkien fan, and I remember her reading Narnia and The Hobbit to me before I even started school. I grew up on Joan Aiken and Dianna Wynne Jones and Alan Garner, and progressed to Tanith Lee and Stephen King via James Herbert and Dennis Wheatley. The genre has always been my go-to place, and other than possibly straight-out crime fiction I cant imagine ever writing anything else. I don’t read a lot of non-genre books either, other than non-fiction and reference works.

My biggest influence in terms of becoming a writer was Tanith Lee, although my writing isn’t anything at all like hers. I loved her books so much when I was younger (and indeed I still do) that it gave me the urge to try and write for myself. I also had a wonderful highschool English teacher who encouraged me a great deal, and to whom I will always be grateful.

These days my favorite authors are probably Ian Rankin, George R R Martin, Dave Hutchinson, William Gibson, Sarah Pinborough and Joe Abercrombie. Of course when I read this on your site I’m bound to remember another dozen wonderful authors I should have mentioned and couldn’t think of at the time!

Oh wow, that’s a tough question. So many books are magical to discover for the first time it’s hard to pick just one, so I’m going to cheat and give you two – firstly Lord of the Rings, for all the obvious reasons but mostly because my late mother read it out loud to me, all of it, over the course of a school summer holiday when I was maybe eight or nine years old. I’ll always remember that.

Secondly I think I’ll have to go for Eight Days of Luke by Dianna Wynne Jones for being the first book I read all by myself, out of choice, and really genuinely loved. It’s still in print and if you have kids in the 9-12 years range who enjoy a sense of wonder and a dash of Norse mythology I can’t recommend it enough for them.

Right at this minute I’m reading Europe at Midnight by Dave Hutchinson, the follow-up to his totally brilliant Europe in Autumn. It’s magnificent. Cross a Len Deighton spy thriller with William Gibson-esque futurism and some biting political insight and that’s what Dave writes.

I’m also enjoying Ian Rankin’s The Beat Goes On, a collection of short stories about his famous Detective Rebus, and as always I have a stack of magic and general reference books I’m dipping in and out of as the need arises.

At the moment I’m focused on the Burned Man series but I always have other things on the go, if not being actively worked on. The majority of what I read for pleasure is secondary world fantasy and I’ve always wanted to write a brutal Conan-esque adventure story so that may see the light of day eventually.

Other than that I’d just like to say thank you for having me here, it’s been a pleasure.

About Drake:
Hitman Don Drake owes a gambling debt to a demon. Forced to carry out one more assassination to clear his debt, Don unwittingly kills an innocent child and brings the Furies of Greek myth down upon himself.

Rescued by an almost-fallen angel called Trixie, Don and his magical accomplice The Burned Man, an imprisoned archdemon, are forced to deal with Lucifer himself whilst battling a powerful evil magician.

Now Don must foil Lucifer’s plan to complete Trixie’s fall and save her soul whilst preventing the Burned Man from breaking free from captivity and wreaking havoc on the entire world.