Interviews An interview with Patricia Ward, author of Skinner Luce

An interview with Patricia Ward, author of Skinner Luce 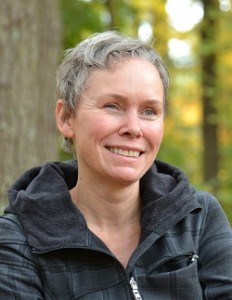 Skinner Luce(published by Talos Press, an imprint of Skyhorse Publishing) is about a woman who was raised human but discovers she’s actually an alien, a serv, sent here to attend the violent and unpredictable Nafikh when They visit Earth. Once she’s entered that alien side of her existence, she’s put under tremendous physical and emotional stress. She regularly faces the real possibility of being maimed or killed, all the while holding down temp jobs to pay the bills. She has to constantly lie to her human family, and can’t quite find a place among her fellow servs. Then this fragile life she’s made for herself gets upended when she’s implicated in a murder, and she has to fight to keep it all together.

My first novel, The Bullet Collection, about two sisters growing up in wartime Beirut, came out in 2003 from Graywolf Press. The two books are vastly different in style and, of course, genre. But as I wrote Skinner Luce, I realized I was exploring the same themes of struggling with identity and belonging. If you’re Other, where do you fit in? How do you make a place for yourself? What does it even mean, to belong? In a way, Skinner Luce is a quintessential immigrant novel, about aliens thrust upon these shores with little recourse or hope, forced to forge their lives in those in-between gray spaces.

I also was driven by the question of what it would be like to face God and discover that in fact, you are worthless to Him. What would happen if you knew your creator cared nothing for you—If you did know your purpose here on Earth, and it was utterly wretched? How would you manage, how would you find meaning? That’s a question Lucy has to grapple with every day.

I did some science and biology research for earlier drafts, but ended up not needing any of it as those parts of the book were pared away. Other than that, re-familiarizing myself with Hull and parts of Boston, although the setting also ended up somewhat backgrounded (more so for Boston—Hull, representing home, I think has a richer atmosphere). The story for me is more internal and emotional, about the interactions that make us who we are, that bring meaning to our lives. I think the most research I did, actually, would be on how to shape a good plot and keep action moving. My writing tends to be more lyrical and meandering, and I had to learn to cut back on that. As for my process, I write in bursts. I’ll lie fallow, so to speak, for ages—months, even. Then suddenly I start up again, and my life gets consumed. When I was writing the last draft of Skinner Luce a few years ago, I actually got sick. I didn’t sleep for weeks. I went a little mad. I hope that doesn’t happen next time, but I guess if it does, I’ll get through it again.

Have you always wanted to write? Will you tell us more about yourself and your background?

I absolutely always wanted to write – I started when I was five years old. I grew up in Beirut, Lebanon during the civil war, and I suppose the fact that we had to stay indoors so much (we also missed about two years of school) contributed to my writing career, in that I had plenty of time to fill reams of paper with all my imaginings. I have boxes and boxes of writing from all those years. We were forced to leave Lebanon for good in 1987, because my dad was American and at that time westerners were being kidnapped. We moved to the States, and when I discovered one could take writing workshops in college, I was amazed, it was like a dream.

An illustrated fairy tale, every sentence written in a different color marker. A knight falls in love with a princess, but then she’s accused of witchcraft. He refuses to give up on her, and ends up accused as well. The king sentences them to death, and they both burn at the stake. But it has a happy ending when their ashes reunite in heaven.

Why SFF? What do you enjoy most about reading, and writing, in the genre?

I think I was always an SFF writer at heart. All the writing in those boxes I mentioned earlier would fall under that genre. I love being lifted (and lifting myself) out of the world we know, or think we know. I love re-experiencing my own reality through the filter of another wildly different experience.

For many years, though, I only wrote fiction set in this reality. Many stories about the war, as well as The Bullet Collection—this was the material that was in me that had to come out, a way to sort through the traumas of my childhood and youth. But The Bullet Collection, now that I think of it, does have many fantasy elements (a flying horse; events recounted differently, but all of them true; fights of imagination that might as well be reality). So, I guess I never quite gave up on exiting this world, but for a number of years I did fall into the trap of pooh-poohing anything remotely ‘genre.’ It was my husband who caused me to reeavaluate my opinion, since he loves SFF, and it didn’t feel right to be looking down my nose at him. I dedicated Skinner Luce to him, because he helped me allow myself to come back to what I love. That isn’t to say I won’t ever write non-SFF fiction, but certainly for now, this is where my heart lies.

That is always a really tough question. I think influence is so subtle, one might not even recognize it. It also changes so much over the years. When I was in high school, I couldn’t get enough of Gabriel Garcia Marquez. Now I find myself addicted to detective novels such as those by Louise Penny, Tana French, or Karin Fossum. I think the last has influenced me the most in recent years, because of her ability to weave such delicate depths into what is classified as genre fiction, thus further dispelling this notion that there has to be some kind of hard division between literary and ‘genre.’ I’ve only just started reading SFF again, so I’m not sure who will tug at me the most, who will leave traces in my subconscious. (I couldn’t read SFF while working on Skinner Luce—I needed other outlets.)

After much mulling, I’d say Never Let Me Go by Kazuo Ishiguro. That book was utterly spellbinding. The film was also fantastic, though couldn’t possibly capture all the nuances of the book.

I’ve been lying fallow for a while now . . . I have a few unfinished novels I’d like to get back to, but I’m not sure when that will happen. I might return to book arts for a little while. Something has to happen soon, whatever it is, because I’m getting really edgy and annoyed with my days. That typically means the volcano’s about to blow.

But I might be speaking too soon. We’ll see.

About Skinner Luce:
“Skinner was what servs called each other. It was because they were fake, their skins a disguise…”

Every year when the deep cold of winter sets in, unbeknownst to humanity, dangerous visitors arrive from another world. Disguised as humans, the Nafikh move among us in secret, hungry for tastes of this existence. Their fickle, often-violent needs must be accommodated at all times, and the price of keeping them satisfied is paid most heavily by servs.

Created by the Nafikh to attend their every whim, servs are physically indistinguishable from humans but for the Source, the painful, white-hot energy that both animates and enslaves them. Destined to live in pain, unable to escape their bondage, servs dwell in a bleak underworld where life is brutal and short.

Lucy is a serv who arrived as a baby and by chance was adopted by humans. She’s an outcast among outcasts, struggling to find a place where she truly belongs. For years she has been walking a tightrope, balancing between the horrors of her serv existence and the ordinary life she desperately longs to maintain; her human family unaware of her darkest secrets.

But when the body of a serv child turns up and Lucy is implicated in the gruesome death, the worlds she’s tried so hard to keep separate collide. Hounded by the police, turned upon by the servs who once held her dear, she must protect her family and the life she’s made for herself.