Horror An interview and giveaway with Cherie Priest, author of Chapelwood

An interview and giveaway with Cherie Priest, author of Chapelwood 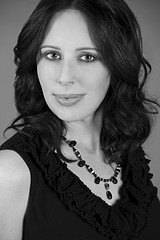 Will you give us a little bit of a teaser for Chapelwood? What can fans of the series look forward to in the followup to Maplecroft?

Chapelwood happens thirty years after the events of Maplecroft, and it’s set in Birmingham, Alabama – in the midst of some real-life ax murders that were so weird I simply could have never made them up. You’ll see some old friends, meet some new friends, and get some answers to lingering questions. Also, I hope…you shall have have your veritable pants scared off.

How would you say that Lizzie Borden has grown and changed from the first book?

She’s older, of course – and she’s been alone for a very long time. She’s tried to stay in touch with the outside world via correspondences and periodicals (much as Emma did, for years) but she’s lonesome and bored, and she leaps at the opportunity to get out of the house and go someplace where she’ll be essentially anonymous. The anonymity offered by Simon Wolf’s phone call is the greatest gift she can imagine…next to the opportunity to learn what became of Nance.

What kind of research have you done for the books? Lots of internet time, lots of nonfiction books. There’s a great Alabama wiki that was very useful as a starting point.

What are a few of your favorite supporting characters?

Ruth, of course – as I’m always fond of writing smart, competent people who lack formal education and resources; Simon, who is loosely patterned off an old friend of mine; the ousted police chief and commissioner, for working hard to keep the faith in the face of terrible odds. Chapelwood has more of a “cast of thousands” than Maplecroft did, and I hope that many of them will strike a chord in the reader.

If these books were to hit the big screen, who could you see playing Lizzie?

I honestly have no idea. I’d leave that up to the movie people!

It’s been a while since we caught up. Have you read any good books lately? Are there any books you’re looking forward to this year?

I’ve just picked up Terry Pratchett’s collection of odds and ends, A Blink of the Screen; also Fran Wilde’s Updraft; and likewise Paul Cornell’s The Witches of Lychford. So far, all of them are quite good!

Next up for me is a set of three crazypants deadlines. I’m genuinely unsure which project will hit the streets next, given the vagaries of publishing – but southern gothic ghost story The Family Plot should land from Tor in April of 2016, I believe. Then another from Roc called Brimstone, about a WWI veteran who brings something terrible home from the western front; and later that year a young adult project from Scholastic called Drawing Fire. Then in 2017, I believe, another gothic from Tor called The Toll.

I think that’s it for now? Man, I’d better get to writing…

About Chapelwood:
From Cherie Priest, the award-winning author of Maplecroft, comes a new tale of Lizzie Borden’s continuing war against the cosmic horrors threatening humanity…

Birmingham, Alabama is infested with malevolence. Prejudice and hatred have consumed the minds and hearts of its populace. A murderer, unimaginatively named “Harry the Hacker” by the press, has been carving up citizens with a hatchet. And from the church known as Chapelwood, an unholy gospel is being spread by a sect that worships dark gods from beyond the heavens.

This darkness calls to Lizzie Borden. It is reminiscent of an evil she had dared hoped was extinguished. The parishioners of Chapelwood plan to sacrifice a young woman to summon beings never meant to share reality with humanity. An apocalypse will follow in their wake which will scorch the earth of all life.

Unless she stops it…