Interviews Catching up with David Liss, author of Randoms

Catching up with David Liss, author of Randoms 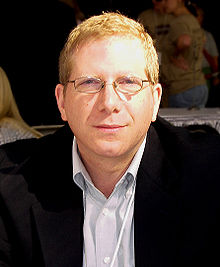 If you’re a regular visitor to My Bookish Ways, you may already know that I’m a huge fan of David Liss’, and I’ll read anything her writes, so I’m very excited to dig into Randoms, his brand new YA science fiction novel! David was kind enough to answer a few of my questions, and more!
*********************
I love the concept of your new book, Randoms! Will you tell us a little about it and what inspired you to write it?

Randoms is a book about a science fiction fan who finds himself in an environment in which fandom becomes a kind of superpower. The premise is that there is a larger galactic culture that reaches out to planets when they reach certain cultural milestones. The first step in evaluating whether or not this world is ready to join the Confederation of United Planets is to have four young people spend a year in their capital city. Three of these people are chosen because they possess a skill or quality admired in the Confederation. The first is selected by pure chance – he or she is the random.

The main character of the book is the random from Earth, but he discovers that he has a leg up on his fellow humans because for years the Confederation has been feeding truths about the larger galactic culture to earth through film, television, novels, comics, and games. In other words, a lot of science fiction is based on reality, and a person who knows the genre already understands some basic truths about what to expect out there.

I began thinking about writing a book like this a long time ago, when my daughter – who just started high school – was in elementary school and tearing through the Harry Potter novels and similar fantasy stories. I wanted to try to hook her on science fiction, but I couldn’t find much out there that would appeal to both younger readers and their parents. I started working on an earlier version of Randoms, but I kept bumping up against my influences. I felt that everything I wrote felt too much like the science fiction that had influenced me. I became frustrated and eventually set the book aside. Then, a couple of years ago, I read Ready Player One by Ernest Cline and Redshirts by John Scalzi – two books that embraced and owned their influences. I loved how both of those novels engaged with material the authors loved but still told their own original stories. That’s when I went back to my own science fiction book and began to deliberate infuse it with references to just about everything I could think of. Tell us more about Zeke Reynolds. Why do you think readers will root for him?

Zeke is in many ways an ordinary guy who has taken a lot of lumps. He lost his father when he was much younger, and now his mother has a degenerative neurological disease. They move around a lot, so he finds comfort and stability in stories and games. He’s also someone who is extremely loyal, and many of the dangers he faces in this story are because he puts himself in difficult situation for the people he cares about.

What supporting characters did you enjoy writing the most?

I was having a blast whenever I was writing about the randoms from the other alien speices/ Steve is sort of a lizardman and a good natured friend – but also a completely unrepentant hooligan. And Tamret, who is the romantic interest in the story, who looks like a big cat and is a little emotionally unhinged. They’re both, in their own ways, loose cannons, which made any scene they were in fun to write.

What made you decide to write a book for a younger audience, and what were the challenges involved?

I always knew that I wanted the book to be about a younger protagonist, but that doesn’t mean it has to be a book for younger readers. It was something I went back and forth on, but end, the way I wrote it was the way the story felt most natural. I think the biggest challenge was finding ways to tell a sophisticated story that would appeal to younger readers.

The beta readers of this book were all adults, and they were incredibly enthusiasitic – I think it was the most enthusiasm I’ve ever seen in my own early readers. Then, as I was polishing the final draft, I began to worry that the book wouldn’t appeal to its target audience, so I gave it to some younger readers to test out. They also seemed to like it. Even better, the younger readers who weren’t hardcore science fiction fans told me they wanted to know more about the films and TV shows and games and comics I mention in the story.

So my hope is that I’ve written an “all ages” book that adults will enjoy as well as children – and one that can serve as a gateway drug to a wider world of nerdiness.

Will you tell us a little more about the “world” of Randoms?

I mentioned that there is a Confederation of United Planets, which is one of the two galactic superpowers. There is also the Phandic Empire, and they’re the bad, conquering aliens. However, the whole good/bad thing gets a little muddy as the book moves along.

The planets in both cultures were originally terraformed and seeded with genetic information by a lost precursor race called the Formers, and that’s the reason so many aliens look like animals from earth (or, Zeke is told, why animals on some planets look like humans). I wanted to ahve a reason why species could be similar enough to work and live together. I also wanted to be sure to include species that look almost exactly like humans but have weird skin colors or cranial ridges – because TV science fiction teaches us that it must be so.

Did you do any particular research for the book?

Has your writing process changed since you first started? If so, how?

I don’t think so. I wrote this book the same way I’ve written all my books. The main difference is that this one was more fun and everything happened much more quickly.

I feel like I’m in a slump. I’m reading a lot, which I always do, but nothing has really grabbed me lately. Maybe your readers can recommend some favorites to me.

I’m working on the final edits of the Randoms sequel, and I need to get busy working on the third book in the series. I’ve also just finished writing a historical fantasy, and I’ll be looking for a new publisher for that soon. I’m also trying to finish another book for younger readers first for me. I am a little overworked at the moment, but all of these projects are incredibly fun, so I refuse to complain.

About Randoms:
A science fiction superfan finds himself on his very own space adventure when he’s randomly selected to join an alien confederacy in this hilarious middle grade debut novel.

Zeke Reynolds comes from a long line of proud science fiction geeks. He knows his games, comics, movies, and TV shows like Captain Kirk knows the starship Enterprise. So it’s a dream come true when he learns the science fiction he loves so much is based on reality—and that he’s been selected to spend a year on a massive space station. To evaluate humanity’s worthiness, the Confederation of United Planets has hand picked three of Earth’s most talented young people—and then there’s Zeke. He’s the random.

Unfortunately, Zeke finds life in space more challenging than he’d hoped. When he saves his transport ship from a treacherous enemy attack, he’s labeled a war criminal. Now despised by the Confederation, rejected by his fellow humans, and pursued by a ruthless enemy, Zeke befriends the alien randoms: rejected by their own species, but loyal to each other. But their presence in the Confederation may not be so random after all, and as the danger increases, Zack’s knowledge of science fiction might be the only thing that can save himself, his friends, and Earth itself.