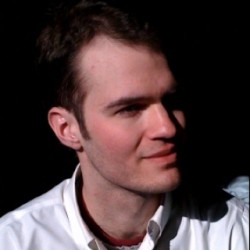 Please welcome Max Gladstone back to the blog! The fourth book in his Craft Sequence, Last First Snow, just came out this month and Max kindly answered a few of my questions. We’ve also got one copy of the book to give away to one lucky US/Canadian winner!
************************************
I know Last First Snow takes place earlier than the events of Three Parts Dead, forty years after the God Wars ended. Will you tell us more about it, and why you decided to write a prequel?

Thanks for asking! The events of Last First Snow have been lurking off-stage for most of the Craft Sequence, shaping the generation that holds power when Three Parts Dead, Two Serpents Rise, and Full Fathom Five take place. I decided to write a prequel—I’ve hesitated to use that word, since it really is a self-contained story, but nonetheless—when those events loomed too large in my mind to go unexamined.

Last First Snow starts after the God Wars’ dust has settled—but as people begin to chafe beneath the Craftsmen’s control. What amounts to a magical rezoning project sparks a protest movement that drags skeletons out of the closet, and exposes the comfortable lies of the new order. What happens next will shape Elayne Kevarian, and the King in Red, and Temoc, and the city of Dresediel Lex, and through them the rest of the Craft Sequence.

I’m very excited to read about a younger Elayne Kevarian, but will you tell us more about Temoc? Temoc is the last priest of the gods of Dresediel Lex, most of whom were killed in the God Wars. He was young when the Wars ended, and spent a few decades after wandering confused, putting himself back together. When Last First Snow opens, he’s reinvented himself as a family man, a community leader, and he’s working to reinvent his gods, too, weaning them off human sacrifice. When members of his congregation take to the street to defend their homes, he follows them, to help out while staving off tragedy.

We’ll see if he manages.

For those that haven’t read the series, will you tell us more about the very unusual “world” of The Craft Sequence?

The Craft Sequence are postindustrial fantasy novels—gods with shareholders’ committees, wizards in pinstriped suits, necromancy that operates a lot like modern bankruptcy law. The lich king pours himself a cup of coffee before he reads his morning Wall Street Journal. (Or the local equivalent.) The partner at an international necromancy firm reviews this year’s class of graduates from the Hidden Schools for promising recruits. Freelance priests build artificial religions to hide souls from sacrifice-hungry mainland deities. Zombies work megafarms, demons serve as private security, and container ships are bigger on the inside than the outside.

It’s a lot like our world, to be honest.

Worldbuilding is very important in books like these. What are a few of your favorite literary “worlds?”

I’m a huge fan of Ursula K LeGuin’s Earthsea books, Lois McMaster Bujold’s Vorkosigan and Chalion series (serieses? Seriii?), and the fantastic one-off worlds Zelazny creates in Lord of Light and Creatures of Light and Darkness. Dan Simmons’ Hyperion and Fall of Hyperion were also huge influences on me.

But worldbuilding isn’t just an SFF thing! I don’t think I’ve ever seen an SFnal world as detailed and rich as the 16th-century Europe Dorothy Dunnett builds for her Lymond Chronicles. If you’re waiting for the next, I don’t know, any book, and you haven’t read Dunnett, you owe it to yourself to give her work a shot.

You’ve now got a few published titles under your belt. Has your writing process changed since you first started?

Not enormously. I brainstorm, research intensely, grumpf around the house for a while, take long walks, and then it’s butt in chair. (Or, often, feet at standing desk. Hands on keyboard, anyway!) Margaret Dunlap of Lizzie Bennet Diaries fame has finally sold me on notecards and outlining for shorter projects, but I’m still trying to figure out how to outline something as extensive as a novel.

I’m not, by the way, and contrary to my previous statements on the subject, a true pantser. I plot in advance and in my head. I write, and throw out, numerous sketches. I’m not a plotter, either, though—generally I don’t have a clear idea of how the book will work until I’m roughly a third through and sometimes not even then. I generally proceed along a bumpercars trajectory. What kind of research have you done for the series?

I read broadly and deeply; if a book uses elements with which I’m not very familiar, I dig into history, culture, mythology, and sociology. I travel if I can, and grill folks about their professions and backgrounds and experiences. Not all of this behavior is directly project-driven. I try to keep my mind, ears, and options open. Life is research—even if I don’t know how I’ll use an experience, it goes into the hopper.

It’s been a while since we’ve caught up… Have you read any good books lately? Anything you’d recommend?

Naomi Novik’s Uprooted is my book of the summer so far, and a lot of other people’s, too—honestly, it doesn’t need any more pushing from me. Her voice and world are so assured and subtle, and the pace of the series so damn swift, I found it irresistible. And its economy! I can think of a lot of writers who would have made Uprooted into an interminable series of books twice as long.

This next one’s not available yet, but I was lucky enough to read an advance manuscript. Everyone’s going to be talking about Seth Dickinson’s The Traitor Baru Cormorant when it hits in a couple months. This book is brutal, brilliant, and beautifully written, full of politics and love and genius both whole and broken. It’s a story about how we got to now, and it’s a story about how differently things could have gone. Preorder this now—you don’t want to have to wait for your copy when it hits shelves.

Other upcoming and fantastic work that should be on your radar: Fran Wilde’s Updraft, all wings and secrets and history and hard choices, and Kai Ashanti Wilson’s Sorceror of the Wildeeps, which reads sort of like if The Book of the New Sun and Fafhrd and the Grey Mouser had a baby and it’s wonderful.

The fifth Craft Sequence novel is with Tor already; I just finished the first draft of another book, which should, hopefully, publish between the fifth and sixth Craft novels—it’s a bit of a departure, a project that’s been burning in the back of my mind for the last couple years. Outside of that, I have another piece of interactive fiction in the Craft Sequence universe due out soon, and I’m part of the writing team for a secret agents-with-magic serial called Bookburners, from this really cool new serial fiction startup called Serial Box Publishing—that debuts in September.

I’ve been a busy guy!

Forty years after the God Wars, Dresediel Lex bears the scars of liberation-especially in the Skittersill, a poor district still bound by the fallen gods’ decaying edicts. As long as the gods’ wards last, they strangle development; when they fail, demons will be loosed upon the city. The King in Red hires Elayne Kevarian of the Craft firm Kelethres, Albrecht, and Ao to fix the wards, but the Skittersill’s people have their own ideas. A protest rises against Elayne’s work, led by Temoc, a warrior-priest turned community organizer who wants to build a peaceful future for his city, his wife, and his young son.

As Elayne drags Temoc and the King in Red to the bargaining table, old wounds reopen, old gods stir in their graves, civil blood breaks to new mutiny, and profiteers circle in the desert sky. Elayne and Temoc must fight conspiracy, dark magic, and their own demons to save the peace-or failing that, to save as many people as they can.