Interviews An interview with David Mark, author of Taking Pity

An interview with David Mark, author of Taking Pity 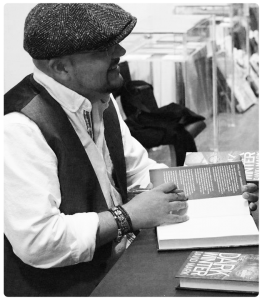 Well, the reviewers have said nice things and used lovely words like ‘stunning’ and ‘amazing’ but they have also used the word ‘complex’, so it might be a bit hard to boil down. In essence, a bedraggled McAvoy is tasked with looking into a 50-year-old massacre at a remote spot in East Yorkshire and his discoveries bring the light dark deeds long since buried as old school and new school criminals collide. You’re best off just reading it and finding out for yourself.

What do you think makes McAvoy such a compelling character?

He’s human. He’s fundamentally good but understands the darkness in people because he believes himself to be far from perfect. He just wants to be with his wife and children and to live a life that matters and doesn’t cause anybody any harm. He feels a duty to the bereaved. He sees his role as coming somewhere between sorrow and goodbye. He’s got a poetic soul and a warrior’s build but the personality of an embarrassed mouse.

Now that you’re four books into the series, is it a bit easier to write each subsequent novel, or does each book come with their own challenges? Will you tell us a little about your writing process?

In many ways it’s easier because I know each established character’s backstory and I’m familiar with where they live and what they look like but I’m also conscious that not every reader has approached the books in chronological order so it’s a judgement call how much exposition to put in with each passing story, especially as I’m trying to write books that work either as a standalone or a series. It’s hard to get that right. My writing process is not very exciting. I basically carry around a completed novel in my head, refining it, bashing it, tying it in knots, reshaping it and driving myself insane and then I finally sit down and type the damn thing. It feels like somebody is putting a straw into my cerebral cortex and taking a good long slurp but it’s ultimately very satisfying. Then when I put those fabulous words ‘the end’ I have to begin the agony of reading it back and chopping out bits that don’t move the story forward. Then it’s on to my agent and editors and that’s when the mental torture really begins! What kind of research have you done for the books, and what is one of the most interesting things you learned?

I don’t really think of what I do as research because I’m always reading obscure or textbooks or clicking on weblinks to unusual pages and absorbing the peculiarities found therein. It all goes into a big inkwell in my head and it comes out as needed. But I realized when writing Taking Pity that I knew very little about the underground bunkers which are all over East Yorkshire and which were built for the eventuality that the Germans won the war. This is where the militia would hide – coming out to sabotage the new rulers. It’s an extraordinary thought and researching all that was mindblowing.

You have a background in journalism (particularly crime), but have you always wanted to write fiction? Will you tell us about that progression?

I was only a journalist because it was vaguely within kissing distance of writing books, which was the only dream I have ever had. I was very good at writing at school and my teachers always said I should try and become a writer but when you’re from a little place in the working class (blue collar) North, it can seem like an impossible ambition. So I managed to talk my way into a job as a trainee journalist at 17 and it all started from there. If it wasn’t for my time spent reporting crime in Hull I don’t think I could have written the McAvoy series, so it’s possible that fate had a plan for me, but that’s only a comforting thought with hindsight. All those years when I couldn’t get published and felt like I was living the wrong life – they felt like torture at the time.

What authors have influenced you the most in life, and in your writing?

So many! Agatha Christie was the first crime writer I fell in love with and after that it’s been a heady mix of Conan Doyle, Wilkie Collins, Dickens, Chandler, Hammett, McBain. From the newer school I adore Val McDermid, John Connolly, Peter May, Ken Bruen, Ian Rankin, Denise Mina. Seriously, so, so many. But bizarrely my favourite writers are Joeph Heller, Terry Pratchett and Bernard Cornwell, so take that lot to your nearest psychiatrist and see if you can find out where McAvoy came from, as I have no idea.

That’s a brilliant question. Probably Death on the Nile. I read it at 11-years-old and had to pretend to be sick so I could stay off school and finish it and when I learned who the killers were I can remember staring at the page open-mouthed. I would love to have that effect on a reader.

What are you currently reading? Is there anything you’re particularly looking forward to this year?

I’ve just started reading White Heat by M J McGrath. It’s a terrific story about a half-Inuit guide hunting a killer on the frozen, snow-blown tundra. It’s beautifully written with a great character in Edie Kiglatuk. I’m also halfway through Mr Mercedes by a certain Stephen King. I had jealously hoped it would be awful but, like always, he’s written something amazing. It’s enough to make you sick.

More writing! I’ve finished the next McAvoy book and am putting the finishing touches to a novel which takes McAvoy to New York. I’ve also got a historical murder mystery coming out next year, set in Yorkshire in 1850 during a terrible plague. It’s bloody and brutal and thoroughly squalid but I enjoyed playing with the language of the time immensely.

About Taking Pity:
It’s been three months since Detective Sergeant Aector McAvoy returned home, or to what was left of it after a horrific tragedy. All that remained was charred masonry, broken timbers, and dried blood–a crude reminder of the home invasion and explosion that tore his family apart. McAvoy’s wife and daughter are safe, he’s been assured; he just wishes he knew where they were.

As McAvoy wrestles with his guilt, self-hatred, and helplessness, trouble persists in stormy Hull. Organized crime emerges as the city’s latest threat, with two warring factions leaving plenty of bodies for Detective Superintendent Trish Pharaoh and her unit to clean up. Now more than ever, Pharaoh needs her sergeant to return to work and be a policeman again. She gives McAvoy a case that’s supposed to ease him back into the game: a reinvestigation of a rural quadruple murder that was put to bed fifty years ago. But what was supposed to be a cut-and-dried job quickly unravels as McAvoy digs up new evidence and witness testimonies, steering closer to some of the most notorious criminals in northern England.

Fast-paced, noir-ish, and fresh off the heels of Sorrow Bound’s violent finale, Taking Pity is the latest page-turning installment in the gripping Detective McAvoy series. Hailed by The New York Times as being “in the honorable tradition of Joseph Wambaugh and Ed McBain,” David Mark’s police procedurals are smart, dark, and above all, wholly captivating.