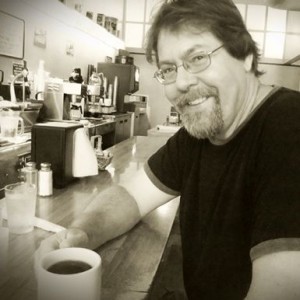 Please welcome Alex Bledsoe to the blog! The third book in his Tufa series, Long Black Curl, just came out, and he kindly answered a few of my questions about it.
***************************
Congrats on the new book! For those that haven’t read the series, will you tell us a bit about the Tufa and what inspired you to write the series?

The Tufa novels are set in contemporary Needsville, Tennessee, a small town in fictional Cloud County, located in the Smoky Mountains region of Appalachia. The Tufa are descended from an exiled band of Celtic fae folk, but are now indistinguishable from regular people…unless, of course, you pay close attention.

Tell us more about Bo-Kate and Jefferson. What do you think makes them compelling characters, and why do you think readers will root for them? What can readers expect from this installment?

I don’t think you’ll root for Bo-Kate: she’s very clearly the villain, and does something horrendous right off the bat so you don’t doubt it for a minute. But she’s legitimately angry about something, and to her, she’s doing the right thing, no matter how many lives it costs. So I hope readers will, if not empathize, at least sympathize with her. And be scared of what she might do to some of the other characters.

Jefferson is different. He’s stuck in a really tough spot, between the person he used to be and the one he is now. He has to sort through all those feelings, and figure out a way to deal with Bo-Kate so that she’s stopped before she can accomplish her goal. As he struggles to do this, I hope readers will remember some of their own no-win situations.

Magic and music are very big themes in the series. Will you tell us more about that? To me, they’re aspects of the same thing. Since I don’t play any instrument, or read music, it’s as incomprehensible to me as the Force is to Han Solo. But it’s a kind of magic everyone has experienced, so it gives me common ground with readers.

Also, it’s impossible—or at least, ill-advised—to write about Appalachia without including music. So much great music has come out of that region, and so many people there continue to create it, that it’s intrinsic to any story set in that region.

Have any characters surprised you while writing the series?

Mandalay Harris really did. I conceived her as a minor supporting character, ten years old when I first wrote about her in The Hum and the Shiver. I deliberately set her up to be enigmatic and inexplicable. But in Long Black Curl, I found her becoming a larger part of the story than I originally intended, and I wrote a surprising number of passages from her perspective.

Do you have a favorite supporting character (or characters) in Long Black Curl?

I always have fun writing about Bliss Overbay. She’s a sort of Jilly Coppercorn figure, weaving in and out of all the Tufa stories in one way or another. Someday I hope to do a whole novel with her as the protagonist, as soon as I come up with an idea worthy of her.

I also enjoyed returning to Bronwyn Hyatt, the protagonist of The Hum and the Shiver, in this book. She’s different now, married and pregnant, but it hasn’t changed her basic personality, and the combination of these things made her a lot of fun to write.

What kind of research have you done for the series, and for Long Black Curl in particular?

The biggest part of the research for any Tufa novel or story is always musical: finding songs that fit and enrich the narrative. I listened to probably hundreds of songs, searching for just the right ones. In this case, I used one old standard (“I’m 900 Miles from My Home”) and two contemporary originals, “Paranoid” by Alice Peacock and “Valiant and Fury Girls” by Lou Buckingham.

What have you enjoyed most about writing the series?

Creating the sense of community for the Tufa in Needsville. Imagining how the different characters interact, and what their shared experiences might be, is a real joy. My other series are based around characters (Eddie LaCrosse, Tanna Tully), but this one centers on a place. And that’s a lot of fun.

The fourth Tufa novel, Chapel of Ease, is finished and will be out in September 2016. I’m working on the fifth one right now. And I hope to have some other news to announce as well. In all the time the Tufa have existed, only two have ever been exiled: Bo-Kate Wisby and her lover, Jefferson Powell. They were cast out, stripped of their ability to make music, and cursed to never be able to find their way back to Needsville. Their crime? A love that crossed the boundary of the two Tufa tribes, resulting in the death of several people.

Somehow, Bo-Kate has found her way back. She intends to take over both tribes, which means eliminating both Rockhouse Hicks and Mandalay Harris. Bo-Kate has a secret weapon: Byron Harley, a rockabilly singer known as the “Hillbilly Hercules” for his immense size and strength, and who has passed the last sixty years trapped in a bubble of faery time. He’s ready to take revenge on any Tufa he finds.

The only one who can stop Bo-Kate is Jefferson Powell. Released from the curse and summoned back to Cloud County, even he isn’t sure what will happen when they finally meet. Will he fall in love with her again? Will he join her in her quest to unite the Tufa under her rule? Or will he have to sacrifice himself to save the people who once banished him?