Fantasy Catching up with Lauren M. Roy, author of The Fire Children

Catching up with Lauren M. Roy, author of The Fire Children 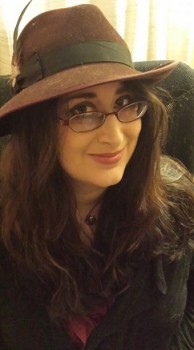 Sure thing – The Fire Children is about a city whose inhabitants retreat into underground caverns when a solar eclipse happens, because it means Mother Sun is sending her children down to visit the world. One girl ventures up above when the light disappears, and finds herself the only person who can save the Fire Children from the Witch Womens’ nefarious plans.

I had an idea for a girl alone in an empty city, beneath a strangely lit sky. Originally, it was supposed to be a short story, but my short fiction ideas have this terrible habit of turning into novels. Seriously, it’s happened three times now.

Why do you think readers will root for Yulla and Ember?

They have a mutual fascination with one another – Yulla’s a young human woman meeting one of her gods. Ember’s a godling meeting one of the people he’s supposed to protect. They join together to save Ember’s brothers and sisters, and each brings different strengths and skills to the table.

Did you do any specific research for the book?

Oh, the research spirals this book sparked. I read up on Middle Eastern societies and traditions, desert flora and fauna, architecture, and planetary physics. I had to stop short of downloading software that lets you create a solar system to see what would make Kaladim’s long solar eclipses possible. I haven’t ruled out going back and toying with it, but if I’d played with that program during the research phase, I’d still be writing. What made you decide to write a book for young adults?

When I started writing, I didn’t have a specific audience or age range in mind, but I realized fairly quickly that the story would focus on Yulla’s point of view. YA books often have an underlying theme of figuring out who you are and where you fit in, and that was exactly what Yulla was going through. In my day job, I read a lot of YA, and it’s a category I’ve written in before, so it was nice to return to. There’s so much brilliant YA fiction out there right now.

You now have a few published titles under your belt. Has your writing process changed from when you first started?

I am slightly – slightly! – less averse to outlining. It still drains my soul and is the cause of much whining, but I will, begrudgingly, admit it can be helpful. I’m also better at recognizing when a plot point or scene is leading precisely nowhere. I’ve learned that it’s okay to take a step back and figure out a better direction to head in, rather than powering through for the sake of word count. It doesn’t always save me from dead-end tangents, but I’m more equipped to work around them when I encounter them.

So many! I’ve been keeping a spreadsheet to keep track of what I read. I’ve been diving into two anthologies, Sisters of the Revolution, which is a collection of feminist speculative fiction edited by Ann and Jeff Vandermeer, and Lightspeed Magazine’s Queers Destroy Science Fiction, edited by Seanan McGuire. I’ve also just finished Lila Bowen’s Wake of Vultures, which is coming out this fall, and Chuck Wendig’s Zer0es. Both are utterly brilliant and available for preorder!

In addition to the anthologies, I’m reading N.K. Jemisin’s The Fifth Season. Her Inheritance Trilogy was fantastic, and this is the start of a new series. I’ve also managed to get ahold of the Welcome to Night Vale novel, but I haven’t started it yet – my husband is reading it and knows that spoilers will mean trouble.

Right now I’m working on a YA science fiction novel, and eyeballing a novella based on the fairy tale “The Six Swans.” Plus, I’m gearing up for con season – GenCon and WorldCon, here I come!

About The Fire Children:
Two children escape the darkness of their underground dwellings, to find adventure, magic and terrible danger await anyone who ventures above ground.

Fifteen years have passed since Mother Sun last sent her children to walk the world. When the eclipse comes, the people retreat to the caverns beneath the Kaladim, passing the days in total darkness while the Fire Children explore their world. It’s death to even look upon them, the stories say.

Despite the warnings, Yulla gives in to her curiosity and ventures to the surface. There she witnesses the Witch Women — who rumors say worship dead Father Sea, rather than Mother Sun — capturing one of the Children and hauling her away. Yulla isn’t the only one who saw the kidnapping; Ember, the last of the Fire Children, reveals himself to Yulla and implores her to help.

Trapped up above and hunted by the witches and the desert wind, Yulla and Ember must find a way free his siblings and put a stop to the Witch Womens’ plans, before they can use the Fire Children to bind Mother Sun herself.