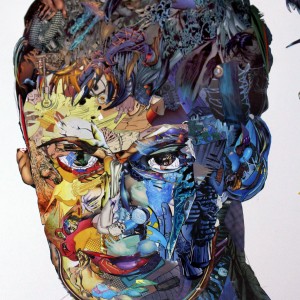 I just timed it at only eight seconds, but there’s not much you can do with two seconds.

Will you tell us more about the future Tokyo that the book is set in?
It’s kind of like Tokyo today—crowded, clean, efficient, at least on the surface—but there’s this thing called the ImmaNet that every citizen connects to through a computer system integrated with their bodies (BodyBank). You can think of the ImmaNet as like a virtual world except instead of being contained inside a screen or in some alternate realm called cyberspace, it’s overlaid on the world. Walls, windows, streets, clothes, the sky, pretty much everything in sight is covered in a flux of cinematic images and information designed to sell something or other. Citizens are able to decide how they look using digimake software, and most of them just do some fine-tuning to appear more attractive, but some choose to be digimade as someone completely different, like a monster or a teen idol or whatever they want.

That’s the general picture, but each chapter goes into a different district of Tokyo: Ginza, Kanda, Kabukicho. These areas currently exist today, but I’ve used my two ideas of actions as intellectual properties and the ImmaNet to exaggerate their present character and transform them into something else. People who know Tokyo will see how my future districts resemble the ones today and people who don’t will be transported to some pretty strange environments.

I’ve also created an area of Tokyo on reclaimed land that is currently part of Tokyo Bay: Wakuwaku City, a luxury-condo-paradise-cum-theme-park. To the west of that is The District of Dreams, the location of Tokyo’s bankdeath camp, which is where the bankdead live. I won’t say anything more about The District of Dreams though. For that you have to read the sequel, The Naked World, which I’m currently writing.

Besides Amon Kenzaki, what characters did you enjoy writing the most?
I had the most fun with Yoshiyuki Sekido and Kai Monju, also known as the PhisherKing.

Sekido was fun because he has this maddeningly roundabout, verbose way of speaking. It took me a while to figure him out, but when I finally nailed his voice, his dialog began to just pour out of me, as though there were a little Sekido lurking in my head, which terrified me because he’s kind of nuts!

The PhisherKing was a pleasure to write because he has so many layers. Beneath his shrewd businessman’s shell is a damaged soul immersed in mystical wisdom. I constructed him by mashing together several mythological figures, so he also carries ancient, archetypical, resonances, at least for me. What is your writing process like?
Although my process for writing articles and short stories is pretty straightforward, I think I’m still figuring it out for novels. Writing Cash Crash Jubilee was a spiraling haphazard process. I started with the basic concept of everything on Earth being intellectual properties, came up with an extremely frugal character who would later become Amon, wrote a few scenes and then abandoned the whole project for about 7 years. When I took it up again after moving to Japan and finding work as a translator, I wasn’t really sure how to get going with the manuscript again. I started by adding scenes and developing other characters. Then I outlined, did research, redeveloped the concept, went back to the plot, wrote more scenes, did more research, etc., etc. I was inching along on this circular course until one day the ending to the whole story came to me in a flash. This allowed me to figure out the entire narrative arc, and, once I had an outline in hand, I began to write each chapter in order.

I was working away at this for about six months when I decided on a whim to look up average word counts for novels and realized that I was way over (at something like 160,000 words), which told me I was writing two novels, not one. In fact, I now realize I was writing three, as I’ve just decided to split the second book in two. The naivety of first time novelists! (I was kind of worried my stories would be like biological cells, and keep on multiplying endlessly, but I’m certain now that three is the limit).

After I had decided where book one would end, I wrote a first draft and did about 3 rewrites before submitting to various agents. By the time Skyhorse offered me a contract, the manuscript was fairly polished and it was just a matter of tightening a few things up a bit.

I’m now writing the sequel, The Naked World, and so far it’s unfolding in a similarly haphazard way, though having the outline already drawn up is very helpful. For the book I plan to write after the Jubilee Cycle, I’m planning to work without an outline and instead improvise off the characters, concept and setting. I seem to write best when the story grows organically, but unfortunately that isn’t something within my control. It either comes or it doesn’t and all I can do is write everyday and hope.

What are a few of your favorite future “worlds” in science fiction, and what authors or books have influenced you the most?
You may be surprised to hear this, but I don’t read that much science fiction! Well, actually, I’ve read my fair share, but I’m very selective about which titles I choose. I also tend to read a lot of genre-benders and literary fiction and the hard-to-classify combination of magic realism, surrealism and postmodernism they’ve got going on in Japan right now.

As for great future worlds, the first book that popped into my head was Dune. I got lost around book five but remember loving the first three when I read them around adolescence. What a universe that is, with the spice and the prophecies and the Fremen and stuff! But I’m not conscious that Frank Herbert had any influence on me.
As for writers that influenced how I wrote Cash Crash Jubilee, I would list the following: Haruki Murakami, George Orwell, William Gibson, Phillip K. Dick, Franz Kafka, Ursula K. Le Guin, Kurt Vonnegut, Margaret Atwood, China Mieville, Jonathan Swift and Plato.

If you could experience one book again the very first time, which one would it be?
I almost said 1984 or Hardboiled Wonderland And The End Of The World. I re-read 1984 a couple of years ago after about 10 years and was blown away by its continued relevance, its subtle intellectual sophistication and three things people often seem to forget about it; namely, its masterful storytelling, vivid realism and flawless writing. “Hardboiled Wonderland”, a 1985 SF/F genre-bender by Haruki Murakami, I read for the first time several years ago. This novel is best experienced going in blind, so I won’t say anything about it, except to note that it is the coolest fucking story ever.

But thinking about the question more carefully, my answer has got to be The Lord Of The Rings. I read that when I was 8 and it was my favorite book for years. I know that writers like China Mieville have been known to criticize Tolkien, and with the whole industry of shallow imitations like Sword of Shannara that the trilogy spawned I don’t blame him (though I hope he acknowledges somewhere that much of his radical fantasy can only be understood in relation to the conservative fantasy it reacts against, with Tolkien’s work occupying the opposite pole on the same continuum). Overthrowing the hegemony of the Tolkien model was an important task for recent generations of fantasy writers. But there’s no denying the originality, seamlessness and sheer power of The Lord Of The Rings, so that is my choice, though I suspect that to properly appreciate this trilogy again I would have to revert to being a child.

When you’re not writing, how do you like to spend your free time?
Reading fiction in English and Japanese, studying a bit of philosophy, watching movies, having dinner with friends, about once a year I climb a mountain. Also, since about a year and a half ago, I revived one of my teenage hobbies and started practicing street dance (popping) to stay in shape. My suspicion is that I’m unconsciously compensating for the lack of androids in my novel by learning the robot.

What’s next for you, this year and beyond?
Well, I’m working away at the sequel, The Naked World, as part of my contract with Skyhorse Publishing, and am pleased to announce that we have just reached an agreement for the third and final book in the series. I’m gradually developing two novels set in present day Tokyo that I would classify as magic realist and that I’m planning to write after I’ve finished the Jubilee Cycle. I’m trying to get some old short stories published and writing new ones. Hopefully I can squeeze in a few newspaper articles too.

I also hope to break into literary translation (most of the translation I do now is technical). Last year, I was hired by a Japanese publisher to translate a coming-of-age novel by one of Japan’s leading writers, Ryo Asai, that I am tentatively calling On The Cusp, but various issues (not connected to me directly) have blocked its publication. I’m hoping these will be sorted out soon, so my finished translation can be released as an ebook as planned. Either way, I plan to get my story translations published in the near future.

These various projects should keep me occupied for about the next decade if all goes as planned (which I’m certain it won’t, hopefully for the best).

About Cash Crash Jubilee:
A cyber-dystopian thriller unlike any other.

In a near future Tokyo, every action—from blinking to sexual intercourse—is intellectual property owned by corporations that charge licensing fees. A BodyBank computer system implanted in each citizen records their movements from moment to moment, and connects them to the audio-visual overlay of the ImmaNet, so that every inch of this cyber-dystopian metropolis crawls with information and shifting cinematic promotainment.

Amon Kenzaki works as a Liquidator for the Global Action Transaction Authority. His job is to capture bankrupt citizens, remove their BodyBank, and banish them to BankDeath Camps where they are forever cut off from the action-transaction economy. Amon always plays by the rules and is steadily climbing the Liquidation Ministry ladder.

With his savings accumulating and another promotion coming, everything seems to be going well, until he is asked to cash crash a charismatic politician and model citizen, and soon after is charged for an incredibly expensive action called “jubilee” that he is sure he never performed. To restore balance to his account, Amon must unravel the secret of jubilee, but quickly finds himself asking dangerous questions about the system to which he’s devoted his life, and the costly investigation only drags him closer and closer to the pit of bankruptcy.

In book one of the Jubilee Cycle, Cash Crash Jubilee, debut novelist Eli K. P. William wields the incisive power of speculative fiction to show how, in a world of corporate finance run amok, one man will do everything for the sake of truth and justice.