Interviews An interview and giveaway with James Cambias, author of Corsair

An interview and giveaway with James Cambias, author of Corsair 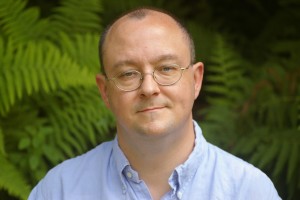 Please welcome James Cambias back to the blog! His new book, Corsair, just came out, and he answered a few of my questions about it, and more!

Also, courtesy of the lovely folks at Tor, we’ve got 3 copies to give away to 3 lucky US/Canadian winners, so be sure to enter to win using the widget below the post.
*****************************************
Space pirates and computer hackers? I’m in! Will you tell us a little about your new book, Corsair?
Certainly! Corsair is my attempt to write a near-future, hard-SF take on a classic SF trope — Space Pirates! Turns out space piracy works fine if you leave the pirates back on Earth and let the spacecraft operate semi-autonomously in orbit. In particular, I found a place in space which is the perfect pirate hangout: the Lagrange One point, the spot where Earth’s gravitational attraction and that of the Moon balance each other. It’s a semi-stable position, so you can park a spacecraft there with only minimal use of thrusters to stay in place. And it’s on the direct low-energy path between Moon and Earth, so any valuable cargoes have to pass right by your parked pirate satellite.

Why do you think readers will root for Elizabeth and David?
Elizabeth is trying to do her duty and defend the innocent, even when nobody will listen, and eventually she has to decide between duty and doing the right thing. David is a very bad person who gets hit with the clue bat hard enough to start trying to redeem himself. They’re both smart, resourceful, and more than a little eccentric. What kind of research did you do for the book?
I read up on spacecraft propulsion and orbital mechanics using Winchell Chung’s amazing “Atomic Rockets” web site, which every science fiction writer should keep bookmarked. I cleverly managed to grow up on the Gulf Coast so I know what the landscape there is like, and of course I read A General History of Pyrates by “Captain Charles Johnson” (who is generally believed to be Daniel Defoe hiding behind a pseudonym). A lot of the research came from reading the news: articles about space resource production, terrorism, refugees, and cyber-warfare.

Are there any supporting characters that you especially enjoyed writing?
Two of the villains are my favorites. There’s the incredibly menacing mercenary killer Vlad Draganovic, and the flat-out bonkers rogue astrophysicist who calls himself Halfdan. I particularly enjoyed writing scenes with David/Captain Black and Halfdan, simply because David has a hard time coping with someone even weirder and more annoying than himself.

Has your writing style changed any since you published your first book?
I deliberately adopted a lighter tone for Corsair, with more pop-culture references and offhand cynicism.

What do you know now that you wish you’d known when you first got published?
I was unaware of how much work goes into book promotion. I doubt that would have changed anything, though. It’s also a little surprising how writing a book about submarines and aliens makes me into an official Futurist and expert on Literature.

It’s been a while since we caught up… Have you read any good books lately? Is there anything you’re looking forward to this year?
I just finished reading an advance copy of Max Gladstone’s novel Last First Snow from Tor, which is a completely unique and wonderful high fantasy story about city planning and insurance. Excellent book. I am also looking forward to Ken Hite’s immense roleplaying game supplement The Dracula Dossier, from Pelgrane Press, about the secret espionage history behind Bram Stoker’s novel.

What’s next for you?
I’m currently working on my third novel, tentatively titled Arkad’s World, a coming-of-age story about a boy who is the only human on a planet populated by many different alien species. I am also planning followups to Darkling Sea and Corsair.

About Corsair:
In the early 2020s, two young, genius computer hackers, Elizabeth Santiago and David Schwartz, meet at MIT, where Schwartz is sneaking into classes, and have a brief affair. David is amoral and out for himself, and soon disappears. Elizabeth dreams of technology and space travel and takes a military job after graduating. Nearly ten years later, David is setting himself to become a billionaire by working in the shadows under a multiplicity of names for international thieves, and Elizabeth works in intelligence preventing international space piracy. With robotic mining in space becoming a lucrative part of Earth’s economy, shipments from space are dropped down the gravity well into the oceans. David and Elizabeth fight for dominance of the computer systems controlling ore drop placement in international waters. If David can nudge a shipment 500 miles off its target, his employers can get there first and claim it legally in the open sea. Each one intuits that the other is their real competition but can’t prove it. And when Elizabeth loses a major shipment, she leaves government employ to work for a private space company to find a better way to protect shipments. But international piracy has very high stakes and some very evil players. And both Elizabeth and David end up in a world of trouble.