Horror A chat with Eva Darrows, author of The Awesome

A chat with Eva Darrows, author of The Awesome 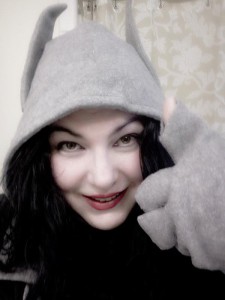 Please welcome Eva Darrows (aka Hillary Monahan) to the blog. The Awesome, her YA debut, just came out yesterday, and she kindly answered a few questions about it, and more!
**************************
I can’t wait to dive into The Awesome! Will you tell us a little bit about it and what inspired you to write it? Why do you call it your “National Lampoon’s Feminist novel?

A few things? The first was I wanted a laugh. I’d just written MARY: THE SUMMONING and it was a dark, moody book that made me side-eye All The Things. I wanted my next literary adventure to be more lighthearted and I got the idea of a girl that had to lose her virginity for her job—I just had to figure out how to work it. What ensued was a feminist slanted “it’s okay to have a body and enjoy your body, girls, no pearl-clutchers here” sex comedy/paranormal adventure THING.

Tell us more about Maggie. Why do you think readers will root for her?

Maggie’s a butthead. No, really. She is. She’s sarcastic and in your face and some readers WON’T root for her for those reasons. She’s abrasive. However, once you get past all eight thousand watts of her sardonic personality, you can see that she’s a product of her upbringing for one, and two, it’s a defense mechanism. This girl is offensively crude so she never appears vulnerable. Some people will relate to that—the putting on of airs for basic survival THING.

What supporting character or characters did you enjoy writing the most?

I love Janice. If you take my mother, David Bowie, and a roid-raging action hero and throw them into a blender, you get Maggie’s mom. She takes zero prisoners. I’m also partial to a beta character named Lubov who’s a six and a half foot tall Russian woman with super strength and a penchant for blue eye shadow. Why did you decide to use a different name for this book?

I plan to write more horror AND more comedy and the twain rarely meet. You’ll see them meld well in film (Cabin in the Woods, Tucker and Dale Versus Evil) but the literary platform doesn’t lend itself to that crossover quite as easily. And frankly, I like organizing. Comedy to the left, horror to the right ( . . . here I am stuck in the middle with you.) It just made sense. My first two books couldn’t be more opposite so let’s slot them into appropriate categories here and here.

You have a few titles under your belt, but have you always wanted to be a writer? Will you tell us more about yourself and your background?

My grandmother was a writer. Do you know those surly old lady cards from Hallmark? Maxine? My grandmother was the original writer for that line. I grew up with her tapping away on her typewriter in the front room. I was a smart kid with a big vocabulary at an early age. I segued into wordsmithing pretty naturally.

I won a story contest in third or fourth grade about a mortified kid going on a beach trip with her embarrassing aunt. It was a comedy, funny enough, or supposed to be one. It involved a pink Cadillac for reasons I’m not quite sure about a trillion years later.

What do you enjoy most about writing for a young audience?

Oh, man. So much. Coming of age stories are a staple in fiction because we’ve all straddled that line between kid and adult and we all know the awkwardness associated with the transition. It’s a shared human experience. The special thing about YA as we know it? As opposed to our Mark Twain stories (traditionally “fine literature” slants toward male point of view awakenings) YA is rife with the girl equivalent and that’s special. I love talking to a fifteen year old me. I love saying the things that no one said to me in fiction at the time. I feel YA allows us to talk to kids about subjects relevant to growing up—sex, body acceptance, grief, etc. It’s a great platform to tell others what we ourselves wish we’d known, and in that telling, maybe spare a kid a self-hatred day or two. Growing up is hard. Having a friend who talks to your hardships—even if that friend is a book—is powerful.

Larry McMurtry’s LONESOME DOVE. It is the best characterization novel I’ve ever read and to this day I am blown away by the vividness of the storytelling.

What are you currently reading? Is there anything you’re particularly looking forward to this year?

I’m reading Dawn Kurtagich’s THE DEAD HOUSE and it’s a great, creepy read—out this September, I believe. I’m also delving into Victoria Schwab’s books soon, and I plan to read a whole heck of a lot more Elizabeth Bear. KAREN MEMORY was awesome. Oh, oh, and Chuck Wendig’s ZER0ES looks amazing. Also, I have Scalzi on my list. I have always MEANT to read stuff by him but I never got around to it for reasons and I feel like I lose nerd cred for telling you that.

A thousand horror DVDs from around the world, comic book art covering the walls of his downstairs Dave Cave, and a love of tabletop RPGs and World of Warcraft. Need I say more?

When you’re not writing, how do you like to spend your free time?

Blowing up internet zombies. I’m a gamer. I feel like there’s a ten step program for admitting that aloud.

I am actually editing my manuscript called DEAD LITTLE MEAN GIRL in hopes of finding it a home. Emma is a nerdy, chubby protagonist who was saddled with the stepsister from Hell. When said stepsister dies, Emma has to compartmentalize grief that’s not really grief but sort of is grief I guess because can you grieve for someone who emotionally abused you? It’s some parts black comedy, some parts drama. I’m fond of it.

About The Awesome:
Seventeen-year-old Maggie Cunningham is tough, smart, and sassy. She’s also not like other girls her age, but then, who would be when the family business is monster hunting? Combat boots, ratty hooded sweatshirts, and hair worn short so nothing with claws can get a grip, Maggie’s concerns in life slant more toward survival than fashion or boys. Which presents a problem when Maggie’s mother informs Maggie that she can’t get her journeyman’s license for hunting until she loses her virginity.

Something about virgin blood turning vampires into pointy rage monsters. Blood and gore and insides being on the outside and all that.

Maggie’s battled ghosts and goblins and her fair share of house brownies, but finding herself a boy – fitting in with her peers – proves a much more daunting task than any monster hunt. Did you know normal girls don’t stuff their bras with holy water balloons? Nor do they carry wooden stakes in their waistbands. And they care about things like “matching” and “footwear.” Of course, they also can’t clean a gun blindfolded, shoot a crossbow, or exorcise ghosts from a house. Which means they’re lame and Maggie’s not. Because Maggie’s awesome. The Awesome, in fact. Just ask her. She’d be more than happy to tell you.

After she finds herself a date.