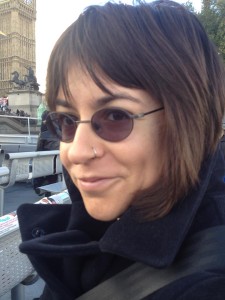 Please welcome Molly Tanzer to the blog! Her new book, Vermilion, is out this month from Word Horde, and she kindly answered a few questions about the book, and more!
***********************
Justin Howe: What was the initial spark that made you write Vermilion? Can you describe how Vermilion evolved over time?

Molly Tanzer: Way back when I was a Teaching Assistant in grad school, I helped out another TA when she was out of town by screening Mr. Vampire (1985) for her Hong Kong Cinema class. I’d never seen Mr. Vampire before, but it’s wonderful, a kung fu horror-comedy about a Taoist priest (the amazing Lam Ching-ying) who uses his spiritual magic to combat the wily undead. I really enjoyed it, and it occurred to me how fun it might be to put a similar character in the American west, working among the Chinese population in Chinatown. I mean, Big Trouble in Little China is so great, and it’s kinda-sorta doing a similar thing, but as my mind tends to stray to historical locations and settings, I knew if I was ever going to move forward with the idea, I’d want it to be a Weird Western.

As to how it evolved… my initial draft, which had a different title, was a brief, pulpy adventure novel where Lou was one of a handful of POV characters (and had almost no personal interactions with Shai). After receiving some feedback from an agent and doing a lot of thinking, I scrapped the draft, and rewrote the book from the ground up. Lou became the only POV character, as not only did I like her the most, she received the most positive response from my first readers. And, since her personality and job also seemed to fascinate them, I decided to really dig in there.

It’s strange, thinking about that initial draft, and how different it is from the finished book… the spirit of my initial idea, a handful of characters, and some of the events of the ending are about all they share at this point.

JH: What about Lou? What motivated you to write her? How did she develop as a character?

MT: Lou was the first character I thought of, back when I was in my initial wild and wooly thinky phase with the novel. I think buried somewhere in the depths of my computer I still have the first character piece I wrote about her, where she was this… brash, confident, sassy, kind of sexy young woman who definitely shared the finished Lou’s sartorial preferences (and love of large firearms) but that’s about it. As Lou and her journey became the center of Vermilion, I needed her to be a more dynamic character, one who grew and changed throughout the course of the novel, and in ways that resonated with the novel’s themes. Early-draft Lou had internalized a lot of self-hatred as regards her Chinese ancestry; she was definitely a lot angrier and fouler-mouthed, and only that, she had resisted learning Chinese and therefore wasn’t really able to communicate with native speakers. In the end, I decided that instead of making her journey that of someone coming to terms with her heritage, to make her comfortable with herself and her identity, and focus on her dealing with her grief and trauma over the death of her father. Having a character who works closely with the dead, but can’t quite process her own grief, seemed like a compelling focal point for the novel. So she became younger, emotionally and age-wise (Lou was closer to 30 in the first draft!), and yet more comfortable with the person she is, inside and out.

JH: What research went into the novel?

MT: I recently wrote a short piece on some of research I did to inform the Chinese cultural elements of Vermilion, for Steampunk Hands Around the World. That article is over on my blog [http://mollytanzer.com/2015/02/24/steampunk-hands-around-the-world-2015/]. Of course, that wasn’t everything I did to research the novel, either regarding Chinatown or anything else… from breaking ground on the novel to Vermilion’s publication there was a span of about five years, and while I researched and wrote other things during that time, I was always checking out materials possibly related to Vermilion, fictional and nonfictional.

I also did a lot of hiking in the Rocky Mountains. I know—such sacrifices for my art, right? But really, one of the reasons I set the bulk of the novel in Colorado was my ability to explore the area at length. I actually drove up to Cheyenne to check out the train station there, as parts of it date back to when Lou would have passed through, and then after researching the roads of the time, settled on a drive home that would have been close to the way Lou and Shai head down to Fort Collins. Looking at the scenery, trying to see it for the first time through her eyes, was illuminating, as was hiking around in Rocky Mountain National Park. There’s actually a hike there that I based many of the descriptions of her journey on!

JH: What authors inspired you early on? Who are you reading now?

MT: Definitely John Steinbeck, for “early on.” I read East of Eden when I was just a wee Tanz, and I loved it; later, when I came back to it, I found a lot of problems with it, and parts of Vermilion are a response to that novel. Other early inspirations would be the novels of Pearl Buck, specifically Pavilion of Women, and I must also nod at T.C. Boyle’s Road to Wellville, and Joe R. Lansdale’s The Magic Wagon. Oh, and of course, True Grit. I also took inspiration for the structure of Vermilion from The Cases of Judge Dee, as translated by Robert Van Gulik; in his introduction he talks about how many classic Chinese detective novels begin with a prologue about “the crime” or from a point of view other what the of the detective protagonist could know, so I decided to echo that with the novel’s structure.

As to what I’m reading now, I just finished E. Catherine Tobler’s The Rings of Anubis, which was a great Steampunk adventure set mainly in Paris and Egypt, and I’m currently reading a pretty dry Henry James novel for my current web series on Pygmalion [http://www.pornokitsch.com/pygmalia/]. I’m also reading Against the Grain, by Joris-Karl Huysmans for research.

JH: What’s next for you? More novels? More short stories? How soon until we see Lou Merriwether again?

MT: I’m always working on a short story, it seems, but my next big project is a novel. While it’s not another “Adventure of Lou Merriwether, Psychopomp,” I feel confident saying that Lou’s first novel-length adventure not be her last…

JH: What are your five of your favorite wuxia films?

MT: Oh gosh… this is tough. Confesion: I actually don’t watch a lot of wuxia films, just Hong Kong cinema in general. For those readers who are new to HKC, wuxia films, as a genre, focus on martial heroes and their adventures, are typically quite serious in tone, and often use wirework/trampolines to enhance the complicated action choreography. So what I’m saying is Crouching Tiger, Hidden Dragon is wuxia, whereas something like… Fist of Fury/The Chinese Connection is not.

Pedantry aside, I do like wuxia… and Crouching Tiger, Hidden Dragon is definitely on my list for favorite wuxia films, but I feel like that’s cheating, since it’s already so well known. Still, I mean… I saw that in the theatre and it blew my mind. And anyways, I suppose Come Drink With Me is also very well known, but I’ll put it on the list, because it’s awesome. Duel to the Death is great, and so is the much sillier Moon Warriors, which has Maggie Cheung and Andy Lau acting opposite an orca. Hero is also on my top 5, but get the 2002 cut if you can, the one untouched by Tarantino.

Now, were I to cast a bit of a wider net, and just talk about kung fu films in general, I’d recommend a bunch of Gordon Liu films. He’s my favorite, especially in classics like The 36th Chamber of Shaolin, Eight Diagram Pole Fighter/Invincible Pole Fighter, Legendary Weapons of China, and the glorious Shaolin Against Ninja. I could go on and on about this topic, especially if we opened things up to kung fu horror, kung fu comedy… but now I’ve recommended way too many films (I just get so excited about this stuff!) so I’ll leave off now.

About Vermilion:
Gunslinging, chain smoking, Stetson-wearing Taoist psychopomp, Elouise “Lou” Merriwether might not be a normal 19-year-old, but she’s too busy keeping San Francisco safe from ghosts, shades, and geung si to care much about that. It’s an important job, though most folks consider it downright spooky. Some have even accused Lou of being more comfortable with the dead than the living, and, well… they’re not wrong.

When Lou hears that a bunch of Chinatown boys have gone missing somewhere deep in the Colorado Rockies she decides to saddle up and head into the wilderness to investigate. Lou fears her particular talents make her better suited to help placate their spirits than ensure they get home alive, but it’s the right thing to do, and she’s the only one willing to do it.

On the road to a mysterious sanatorium known as Fountain of Youth, Lou will encounter bears, desperate men, a very undead villain, and even stranger challenges. Lou will need every one of her talents and a whole lot of luck to make it home alive…