Interviews Interview: Bruce DeSilva, author of A Scourge of Vipers

Interview: Bruce DeSilva, author of A Scourge of Vipers 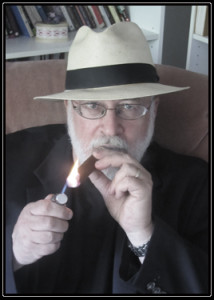 A Scourge of Vipers, the fourth book in Bruce DeSilva’s suspense series featuring investigative reporter Liam Mulligan is out today, and Bruce kindly stopped by to answer a few of my questions about the new book, and more!

Also, the first two books in the series are only $2.99 (ebook), so if you’re new to the series, now’s the perfect time to start!
**********************
Will you tell us a little about A Scourge of Vipers and what we can expect from Liam Mulligan this time around?
The action begins when Rhode Island’s colorful fictional governor, a former religious sister nicknamed Attila the Nun, proposes legalizing sports gambling to ease the state’s budget crisis. Powerful organizations that have a lot to lose—or gain—if gambling is made legal flood the little state with millions of dollars to buy the votes of state legislators. When a powerful state senator turns up dead, a mobbed-up bagman gets shot down, and his briefcase full of cash goes missing, Liam Mulligan, an investigative reporter for The Providence Dispatch, wants to investigate. But the bottom-feeding conglomerate that recently purchased the struggling newspaper has no interest in serious reporting. So Mulligan goes rogue, digging into the story on his own. Soon, shadowy forces try to derail his investigation by destroying his career, his reputation, and perhaps his life. The result is at once suspenseful murder mystery and a serious exploration of the hypocrisy surrounding sports betting and the corrupting influence of big money on politics. Although the book is certainly hardboiled, the tone is a tad lighter than Mulligan fans have come to expect. The first three novels were littered with innocent victims, but in A Scourge of Vipers, most of the people who get shot had it coming.

Why do you think readers will root for Liam? How has he changed or grown since the first book, Rogue Island?
Liam Mulligan is forty-four years old now, and he’s been an investigative reporter for in Rhode Island for his entire working life. He is a man who has trouble dealing with authority. He’s prone to ill-timed wisecracks. He has a strong but flexible sense of right and wrong, willing to break rules—or even the law—to expose corruption and bring bad guys to justice. When he encounters corruption, he’s determined to get to the root of it no matter the personal risk. As the son of a good man who raised a family on a milkman’s paycheck, he has a lot of working-class rage. And the music of blues musicians such as Buddy Guy and Koko Taylor form the soundtrack of his life. Howard Frank Mosher, author of Waiting for Teddy Williams and one of my favorite writers, sent me an email proclaiming that Mulligan is “the most human, unpredictable, and anti-authoritarian fictional character I’ve met since Ranger Gus McCrae of Lonesome Dove.” I’d like to think that he’s right. While those things about Mulligan remain the same from book to book, the ordeals I have put him through can’t help but change him. At the conclusion of Rogue Island, for example, the only way Mulligan can get justice is to become complicit in three mob murders. That shakes his self-perception of what he is capable of doing. In Cliff Walk, he initially views prostitution as a victimless crime, but as he investigates the public corruption that allows it to flourish, he is forced to wade through the ugly underbelly of the sex trade; and what he finds there challenges everything he believes about both sexual morality and religion. In A Scourge of Vipers, a bigger change is coming. Mulligan has always said that he became a reporter because he could never be any good at anything else—that if he couldn’t be a newspaperman, he’d end up squatting on the floor of the bus station, selling pencils out of a tin cup. But halfway through the new novel, he realizes that his journalism career is coming to a bad end. He’s either going to get fired or quit in frustration—unless the dying newspaper folds on him first. So in addition to investigating public corruption and murder, he has to invent a new life for himself. I think readers will find that the way he goes about this is both surprising and ingenious. What kind of research did you do for the book? I’m guessing that your journalism background goes a long way on its own where research is concerned.
I reviewed federal and state laws governing sports gambling, researched statistics on how much Americans bet both legally and illegally on sports, looked up recent cases of game-fixing and point-shaving, and familiarized myself with the arguments for and against legalization. A couple of decades ago, this would have required spending many hours in the research room of a good library, but I was able to find everything I needed in a couple of hours. Thank goodness for Google.

Even though your background is in journalism, have you always wanted to write fiction? Will you tell us a bit about that progression?
For most of my journalism career, writing a novel never occurred to me. But one day in 1994, I got a note from a newspaper reader praising a “nice little story” I’d written. “It could serve as the outline for a novel,” the note said. “Have you considered this?” Normally, I would have just tossed it in the trash, but this one was signed by Evan Hunter, who wrote fine mainstream novels under his own name and the brilliant 87th Precinct police procedurals under the pen name Ed McBain. I sealed the note in plastic, taped it to my home computer, and started writing a novel. That could have been the start of something—but it wasn’t. I hadn’t gotten far before my life suddenly turned upside down. I accepted a demanding new journalism job in Manhattan. I got divorced. Then I got remarried to a woman with a two-year-old child. In this busy new life, there was no time for writing novels. Years streamed by before I finally returned to fiction. When I finally finished Rogue Island, my Edgar Award-winning first novel, I dedicated it to the memory of the author who first encouraged me.

Why crime fiction? What do you enjoy most about reading, and writing, in the genre?
For me, crime fiction provides a vehicle for addressing serious social issues without resorting to long, boring articles that most people aren’t likely to read. Each of my novels succeeds as a suspenseful mystery, but each also addresses a topic of national concern. Rogue Island described the damage the decline of print journalism is doing to the American democracy. Cliff Walk dealt with how the era of ubiquitous pornography is affecting the American culture, including both sexual morality and religion. Providence Rag examined what happens when the interests of justice and public safety collide. And in A Scourge of Vipers, I explore the hypocrisy surrounding legal and illegal sports betting and the corrupting influence of big money on politics. The crime novelists I most enjoy reading also use the form to write about subjects that affect us all. James Lee Burke, Laura Lippman, George Pelecanos and Richard Price are among those who leap to mind.

What are a few of your biggest literary influences?
That’s a difficult question for me, because there are so many. The mean streets of Raymond Chandler and Dashiell Hammett. The noir sensibilities of Jim Thompson and James Ellroy. The lyrical beauty of novels by James Lee Burke and Daniel Woodrell. The quirky characters created by Howard Frank Mosher. The astonishing poetry of my wife, Patricia Smith. And lots more. But the opening paragraph of John Steinbeck’s Cannery Row is my favorite passage in the English language.

If you could experience one book again for the first time, which one would it be?
Woodrell’s Winter’s Bone. The author transformed a simple country girl into one of the most memorable female protagonists in all of literature, and the writing is so lyrical that you could break the entire book into lines of poetry and read it as a modern-day Illiad. What are you currently reading? Is there anything you’re looking forward to this year?
I’m an accidental mimic. If I read a book while I’m writing, my narrative voice starts to sound like the author’s instead of my own. So when I’m writing a novel, which I’m doing now, the only thing I dare to read is my daily New York Times. During the three months of the year when I’m not working on a novel, I blitz-read dozens of books, mostly history and crime novels—both authors I admire and books that I review for The Associated Press. In July, when I finish the fifth Mulligan novel for publication next year, I’ll be diving into a stack of recent novels by Dennis Lehane, Richard Price, Laura Lippman, Ace Atkins, James Ellroy and a host of others.

What’s next for you?
The fifth Mulligan novel, tentatively titled Dreadline, will be published next spring. In it, Mulligan moves out of his crummy apartment in a ramshackle Providence triple-decker and sets up housekeeping in a little waterfront cottage on the island of Jamestown in Narragansett Bay. The new life he’s fashioned for himself has put a bit more money in his pocket. His on-again, off-again relationship with the beautiful lawyer who was introduced in Providence Rag is on again. And he’s enjoying the companionship of two huge, loveable dogs. He’s carrying on a vendetta with a serial-killer cat who leaves its kills on his porch, investigating a baffling jewelry robbery, hunting a fiend who’s been torturing animals, and investigating the dubious background of a star football player for the New England Patriots. Although he’s still battling injustice and getting into trouble, he’s found a small measure of peace in the new life I’ve created for him.

About A Scourge of Vipers:
To solve Rhode Island’s budget crisis, the state’s colorful governor, Attila the Nun, wants to legalize sports gambling; but her plan has unexpected consequences. Organized crime, professional sports leagues, and others who have a lot to lose–or gain–if gambling is made legal flood the state with money to buy the votes of state legislators.

Liam Mulligan, investigative reporter for The Providence Dispatch, wants to investigate, but his bottom-feeding corporate bosses at the dying newspaper have no interest in serious reporting. So Mulligan goes rogue, digging into the story on his own time. When a powerful state legislator turns up dead, an out-of-state bag man gets shot, and his cash-stuffed briefcase goes missing, Mulligan finds himself the target of shadowy forces who seek to derail his investigation by destroying his career, his reputation, and perhaps even his life.

Bruce DeSilva’s A Scourge of Vipers is at once a suspenseful crime story and a serious exploration of the hypocrisy surrounding sports gambling and the corrupting influence of big money on politics.