Historical Fiction An interview with Jonathan Barnes, author of Cannonbridge

An interview with Jonathan Barnes, author of Cannonbridge 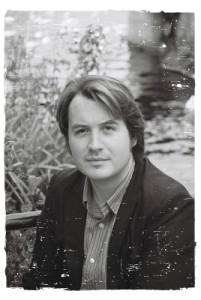 I’m a huge fan of Jonathan Barnes’s work, and if you haven’t discovered him, now is the perfect time. He kindly answered a few of my questions about his newest book, Cannonbridge. Please give him a warm welcome!
*******************************************
I adored The Somnambulist and The Domino Men, so was very, very excited to read Cannonbridge. What inspired you to write it?
Firstly, I’m thrilled that you enjoyed my first two books! Cannonbridge, my third, had a range of inspirations (some of which I probably can’t give away without providing inadvertent spoilers!). One of them was definitely John Sutherland’s terrific critical study Lives of the Novelists which gives an overview of 294 canonical Western writers. It’s a doorstop of a book but there are so many novelists that there are only a few pages on each. This got me wondering what would have happened if someone had simply invented one of these great writers. Who would believe it? Who would fool for it? I was thinking too of William Boyd’s project in which he made up an American artist called “Nat Tate” that plenty of English critics were fooled into thinking was real. Notions of fakery and forging… Of course, the actual treatment of these ideas is quite different in the novel but this was the core of the conceit. Interesting how ideas develop over the course of writing a book!

Cannonbridge takes place in the 1800s, as well as the near future. What kind of research did you do, and what was one of the most interesting things you learned?
I love the 1800s and have always been fascinated by the Victorian period, that late, fin de siècle period in particular. I did plenty of research for each historical figure who appears in the book and I hope that they all behave in character. Certainly, they’re all in the right place at the right time. I had to work hard to find a Christmas when the entire Bronte family would all have been together! I learnt a lot in the process but became particularly fascinated with the figure of Maria Monk – an early exponent of what we now, rather dismissively, call the “misery memoir” who may well have been fictional herself! What’s one of the first things you can remember writing?
One of the very first things? Wow. Apparently, as a very small child, I used to write “newspapers” about family life. No idea what “news” can possibly have been in them!

What authors or books have inspired you the most, in writing, and in life? Who is your Cannonbridge?
I’ve always tried to read as widely possible and I love the work of all kinds of writers – from Charles Dickens to Alan Moore, Stephen King to Sarah Waters, H P Lovecraft to D J Taylor. Lots of possibilities for the most inspirational for my own writing but if I had to pick just one I’d go for Arthur Conan Doyle. He’s a wonderful storyteller but also a much better writer on the level of the sentence than he’s often given credit for. The Hound of the Baskervilles is pretty much a perfect narrative, I think.

What are you currently reading? Is there anything you’re looking forward to this year?
I read a lot of books for review and I’m currently reading new novels by Ben Lerner and Ian Sansom. I’m looking forward this year to new books by Stephen King and Kazuo Ishiguro. Also a wonderful new book which I was lucky enough to read in proof – Laura Barnett’s The Versions of Us.

All of your work, while not entirely horror per se, certainly has horror elements. What’s something that you find truly terrifying?
I think I’m one of those people who constantly imagines the worst case scenario in any situation! Lots of things terrify though I’m often able to exorcise some of those fears in my fiction. Something I find truly terrifying? Honest answer? Lovelessness.

What’s next for you?
Lots of projects in the pipeline but nothing that’s ready to announce. A new novel, hopefully, a ghost story. Also more audio dramas for Big Finish Productions for whom I’ve already written several new Sherlock Holmes adventures and a three-hour version of Frankenstein. Watch this space!

About Cannonbridge:
Something has gone wrong with history in this gripping novel about a lie planted among the greatest works of English fiction.

Flamboyant, charismatic Matthew Cannonbridge was touched by genius, the most influential creative mind of the 19th century, a prolific novelist, accomplished playwright, the poet of his generation. The only problem is, he should never have existed and beleaguered, provincial, recently-divorced 21st Century don Toby Judd is the only person to realise something has gone wrong with history.

All the world was Cannonbridge’s and he possessed, seemingly, the ability to be everywhere at once. Cannonbridge was there that night by Lake Geneva when conversation between Byron, Shelley and Mary Godwin turned to stories of horror and the supernatural. He was sole ally, confidante and friend to the young Dickens as Charles laboured without respite in the blacking factory. He was the only man of standing and renown to regularly visit Oscar Wilde in prison. Tennyson’s drinking companion, Kipling’s best friend, Robert Louis Stevenson’s counsellor and guide – Cannonbridge’s extraordinary life and career spanned a century, earning him a richly-deserved place in the English canon.

But as bibliophiles everywhere prepare to toast the bicentenary of the publication of Cannonbridge’s most celebrated work, Judd’s discovery will lead him on a breakneck chase across the English canon and countryside, to the realisation that the spectre of Matthew Cannonbridge, planted so seamlessly into the heart of the 19th Century, might not be so dead and buried after all…