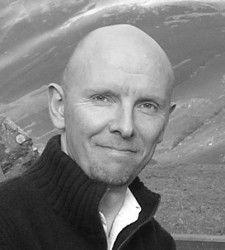 This month, Abaddon released Pat Keleher’s No Man’s World, which is an omnibus of three books: Black Hand Gang, Ironclad Prophecy, and The Alleyman. Pat kindly answereda few of my questions about the omnibus, and more. Please give him a warm welcome.
*********************************
The No Man’s World Omnibus combines Black Hand Gang, Ironclad Prophecy, and The Alleyman in one collection. Will you give us a bit of an overview of the books, and what inspired you to write them?
No Man’s World is an unashamed pulp science fiction adventure about a World War One Pal’s Battalion and several nurses, who disappear from the Somme in 1916 along with a section of the front line. They find themselves on an alien world where everything from the native alien race to the local plant life is trying to kill them. Their level of petrolpunk technology, including a biplane and a Mark 1 Tank, gives them a fighting chance to survive – at least until the supplies of ammunition and rations begin to dwindle. But not all the danger is external. When military discipline begins to fracture, the schism widens between those men who cling to the hope of finding a way home, and the fatalists who believe that this is it and that they have to make the best of it. Then there are those poor souls who might have succumbed to shell-shock in the trenches, who find they can’t cope with the culture shock of an alien world.

The roots of the story go right back to my childhood. I used to get a weekly educational magazine called World of Wonder. It had a strand called Strange Stories, which covered the likes of the Piltdown Man, the Marie Celeste, and Spring Heeled Jack. One was about a regiment that vanished in battle in 1915. Eyewitness reports said that when they charged into battle against the Turkish lines at Suvla, a cloud came down and covered the battlefield. When it lifted, the regiment had disappeared. Of course the truth was much more prosaic and tragic, but as a young boy, it caught my imagination and now finally, with No Mans World, I get to tell my version.

I love the idea of WWI soldiers stranded on an alien planet. What kind of research did you do for the series?
I knew that if I could sell the reality of the trenches in the first chapters, then the reader might be inclined to follow me when I dropped them and the Tommies somewhere else entirely, so after exhausting the local library and Amazon, I turned to a specialist military publisher who sold reprints of original army manuals. I visited regimental museums. I also a read and listened to a lot first person accounts of life in the trenches. Not just the soldiers, but some amazing women, too; Elsie Knocker and Mairi Chisholm, and Pat Beauchamp for instance. Look ‘em up. Oh, yes, and the war poetry, mustn’t forget that. What is your writing process like?
Generally, I sit down and start work as soon as everyone is out of the house in the morning. I do a lot of commissioned magazine work, so I have to be quite structured, as there’s a never-ending treadmill of deadlines to hit. I’ll generally work from about eight in the morning until twelve – one o’ o clock on one project and then from two until six on something else. Often things bleed over to the evening and weekends. I might end up ‘tinkering’ with a piece just before bedtime which can occasionally lead to late sessions if I’m in the zone. It’s basically about just sitting down and doing it.

Have you always wanted to write? Will you tell us a little more about yourself and your background?
Actually no. I’m not one of those authors who always knew they wanted to be writer (although I kind of wish I was). I was into comics as a kid and wanted to draw. I went on to do a Fine Art degree but soon realized that my style and pace weren’t suited to comics, so I started writing them. At the time everybody in the British comics industry wanted to work for 2000 AD, me included, but competition was stiff and there was also a whole bunch of other work out there involving TV Tie-in stuff for younger readers, and I began building a career writing that. My first published work was a He-Man and the Masters of the Universe comic strip. I spent the next twenty odd years writing pretty much every kind of TV Tie-in comic from Powers Rangers to My Little Pony. I’ve gone on to work on animated cartoons, audio books, radio and computer games. I came to novel writing quite late and Abaddon were excited enough about the ‘Trenches and Extraterrestrials’ pitch to take a punt on me. Interestingly for me, Abaddon are owned by Rebellion, who now own 2000 AD. So I still have hope.

What’s one of the first things you can remember writing?
Nothing specific, but I do remember at school having to write weekly English compositions for homework. We were given a choice of three titles written on a black board (always two figurative and one descriptive) and I can remember some of the mental and literary contortions I had to go through to put a fantasy or science fiction spin on some of them, much to the exasperation of the English teacher.

What do you enjoy most about writing, and reading, SFF?
The imaginations of authors that can take me to places I never knew I wanted to go to. And as for writing, it’s answering the eternal question, ‘what if?’

What authors have influenced you the most?
Too many to mention, but if I had to point fingers, Mervyn Peake, Flann O’Brien, Alan Plater, Bernard Cornwell, Alan Moore, Iain Banks and Dan Abnett are among the guilty.

If you could read one book again for the first time, which one would it be?
Crumbs. I think that would have to be Silence of the Lambs by Thomas Harris. I saw Michael Mann’s film Manhunter and then picked up the book, Red Dragon to find out that there was sequel. I only expected a few scenes of Lector in a cell again, so when he escaped I was hooked. I stayed up until four in the morning to finish it. When the film came out I knew what was coming, and remembered envying the audience around me who hadn’t read the book.

What’s next for you?
I’ve just written a No Man’s World short story for Abaddon’s 10th Anniversary. I’ve also got several others short stories in the pipeline, one I’ve just finished is a short horror story for the KnightWatch Press anthology, ‘Thou Shalt Not’, out later this year, and I have something in the works for Fox Spirit Books. Beyond that, it’s all iron in fires.

About No Man’s World:
On November 1st 1916, 900 men of the 13th Battalion of the Pennine Fusiliers vanish without trace from the battlefield only to find themselves on an alien planet.

There they must learn to survive in a frightening and hostile environment, forced to rely on dwindling supplies of ammo and rations as the natives of this strange new world begin to take an interest. However, the aliens amongst them are only the first of their worries, as a sinister and arcane threat begins to take hold from within their own ranks!

No Man’s World presents all three novels from this series , Black Hand Gang, Ironclad Prophecy and The Alleyman, in one extraordinary collection.