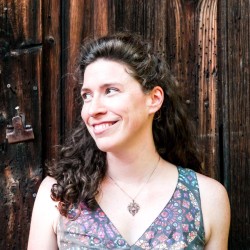 Please welcome Camille DeAngelis to the blog! Her new book, Bones and All, just came out this month, and she kindly answered a few of my questions about it, and more.
***********************************************************
Will you tell us a bit about BONES & ALL and what inspired you to write it?
The story started out as a three-word joke: “cannibals in love.” The more I sat with it, though, the more I earnestly wondered how someone with such a monstrous compulsion could experience real love. Then one day Maren just started talking to me in the shower (as it sometimes happens) and we were off and writing!

Maren Yearly is a very unusual sixteen year old. Will you tell us more about her?
Maren looks like a good girl. She wants to be a good girl, but every time someone shows her too much affection she has the irresistible urge to gobble them up (yes, bones and all). When her mother abandons her on the morning after her sixteenth birthday, Maren goes looking for her father, whom she’s never met, and winds up running into more people who are secretly like her. She’s trying to figure out how to be a decent human being in spite of the evil thing she does.

What kind of research did you do for the book?
Although most of the places Maren and her friend Lee travel to are made up (they could be anywhere in America, after all), I still looked at maps to figure out how far a day’s driving might take them. A year or two before I got the idea for this book, I visited my friend Maggie in Wisconsin and she showed me around the UW-Madison campus, so I was able to be relatively specific in that section of the novel. What is your writing process like?
It’s very intuitive. Whether I’m jotting down brand-new ideas or fleshing out stories in progress, I feel like I’m taking dictation from an advisory board of invisible friends. Drafting and idea generation are even more exhilarating when I picture it happening that way—and for all I know, it might be true!

I generally sketch out the premise and write a few dozen pages before I impose any shape or order upon the thing. The outline happens maybe a third of the way into the process. The other thing I’ve noticed about how I write novels is that, if I let an idea incubate for years (up to a decade!), it’s almost completely assembled itself in my head by the time I finally sit down to write. I know we all feel pressure to publish as soon as possible, but I think a long marination period is usually in the best service of the story.

You wrote this book in the year after you went vegan, after being a vegetarian for some time. What would you like to see readers take away from it?
I’d like my reader to put down the book thinking, “Wait a minute. I’m a predator? I never thought of meat eating that way before.” I can’t say enough about how much happier and more productive I am since I went vegan four years ago, so I really hope the book inspires other people to consider adopting a more compassionate lifestyle.

What authors have inspired you the most, in your writing, and in life?
In writing: the Anglo-Irish gothic writer Joseph Sheridan Le Fanu, Mike McCormack (my teacher at NUI Galway), Angela Carter, Philip Pullman, and Neil Gaiman.

In life: definitely Nova Ren Suma. She is the humblest, most generous writer I know, and I think we’d all be a lot happier in our lives and careers if we strove to be as kind and as helpful as she is (as opposed to, you know, secretly wanting to be more successful than everyone else).

If you could experience one book again for the first time, which one would it be?
This is old school, but I have to say Anne of Green Gables. It’s not only the novel that made me want to become a writer—it showed me just how much heart a novel can have.

What are you currently reading?
Research for a new project as well as textbooks on Hinduism for a course I’m auditing at Tufts, but my treat reading is Rooftoppers by Katherine Rundell. My dear friend Mackenzi Lee (whose phenomenal debut novel, This Monstrous Thing, comes out in September) enthusiastically recommended it.

I also just finished This is How: Surviving What You Think You Can’t by Augusten Burroughs, which is the most gorgeously written “self help” book I have ever read. It was my bus reading, so it made me cry in public a lot.

What’s one of your favorite vegan dishes?
I can only pick one?! I don’t make it as often as I’d like to, but Wartime Pie is the perfect dish for a cold winter’s night. (I’m big into adapting vintage recipes—one of my back-burner projects is veganizing an 18th-century Scottish cookbook.) Last week I got to interview Miyoko Schinner, who is an expert on vegan cheesemaking, and I’m going to make my very first batch of “chèvre” today out of her first book, Artisan Vegan Cheese. Super excited for that.

I’ve also been doing a lot of baking lately. Here are links to a couple of my all-time favorite recipes: pumpkin chai snickerdoodles and coconut cream pie. You can see why it cracks me up when people talk about “depriving yourself” if you go vegan!

When you’re not writing or practicing yoga, how do you like to spend your free time?
I knit a lot, and I’m also trying to become a more competent seamstress. You can see some of the things I’ve made here and here.

What’s next for you?
I’m currently revising my next novel (tentatively titled Immaculate Heart), which is coming out in 2016. It’s about an American journalist who becomes obsessed with an apparition of the Virgin Mary in the small Irish town where his family’s from. I think of it as a companion novel to Bones & All because they both deal with self deception, although the new one will definitely be easier on the stomach.

I’m also working on a nonfiction project on creativity and community (which goes along nicely with my very first writing retreat, which I’m hosting in New Hampshire this September!)

And after all that, probably another YA novel. 🙂

About Bones & All:
Maren Yearly is a young woman who wants the same things we all do. She wants to be someone people admire and respect. She wants to be loved. But her secret, shameful needs have forced her into exile. She hates herself for the bad thing she does, for what it’s done to her family and her sense of identity; for how it dictates her place in the world and how people see her–how they judge her. She didn’t choose to be this way.

Because Maren Yearly doesn’t just break hearts, she devours them. Ever since her mother found Penny Wilson’s eardrum in her mouth when Maren was just two years old, she knew life would never be normal for either of them. Love may come in many shapes and sizes, but for Maren, it always ends the same-with her hiding the evidence and her mother packing up the car.

But when her mother abandons her the day after her sixteenth birthday, Maren goes looking for the father she has never known, and finds much more than she bargained for along the way.

Faced with a world of fellow eaters, potential enemies, and the prospect of love, Maren realizes she isn’t only looking for her father, she’s looking for herself.