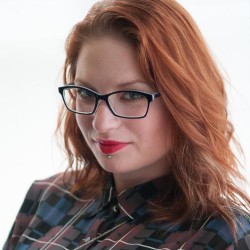 *Elle Brown and I are sitting in a pub called the Tipsy Lantern in the city of Pinton; we’re meeting early on in Graced, before things get a little too exciting for her. The air is filled with the smells of smoke, urine, and unwashed bodies. I wonder why she made us meet here, but then, she’s the city guard and I’m the author. I didn’t think she even liked the establishment.

Welcome, Eleanor. Can I call you Elle?

Sure, everyone else does. Only Gran calls me Eleanor, so kind of makes me shudder every time I hear it. Hey! What’s this thing? (Elle picks up my iPhone).

What does it do? Looks pretty strange to me. Not like a musical instrument at all. It’s really shiny.

It records the sound of our voices talking, so I can reference it later. Seriously? That is awesome. Can I keep it? (Elle starts pulling the phone toward her satchel).

Remember. We’re here to do an interview. What would you call your biggest goals in life?

No, I don’t know. Can you elaborate?

You have Blue eyes. Shouldn’t you know?

I’m not from around here, remember?

Fine. Emmie is Graced. Special. She has Teal eyes and a psychic ability – and no, I’m not telling you what it is. Let’s just say it’s super rare. Vampires like to collect unusual ‘things’, and Emmie’s eye colour makes her different. And yes, people are things in this shithole of a city. Anyway, I’ve already kill-uh, I mean, uh, diverted vampires from wanting to own Emmie in the past.

Can you explain what Graced means?

You do know I am not meant to do that. It’s meant to be secret – vampires, weres and humans don’t know we have these powers.

Yes, but I do have Blue eyes.

All right…you sure this isn’t going to be shown to anyone who doesn’t know about us? Because if you do, I’ll hurt you. Pretty badly.

(I nod and cross my fingers).

Right. Graceds are humans with special powers. We supposedly inherited them through our genes – whatever that means, and no, I don’t want to rehash the explanation Gran gave me – and they show through our eye colours. So Green eyes equals telepathy, Gray eyes equals telekinesis, and Blue eyes equals empathy. People with Brown eyes are normal humans, and people with Hazel, like me, are something in-between.

So do vampires or weres have any psychic abilities?

No. Well, some vampires think they can mesmerise humans, but I’ve never seen that happen. Filthy leeches.

Who would like vampires? They think of humans as food, and in case you hadn’t noticed, I’m human.

I used to hate them, too. Still don’t like them, as a general rule. But Clay is okay, for a fleabag. I guess.

Oh, we’re running out of time. I’ll have to skip ahead. So, if there was one thing you could do, what would it be?

I’d make the world a safe place for my sister. It’s why I’m a guard. Every time I arrest one of those aristo jerks, or knock a vampire’s head in for feeding off the wrong person, it helps keeps the streets safe for Emmie. I just want her to have a childhood, to not be fearful that every time she steps out the door she’s going to become some jewel in a vampire’s art gallery.

And lastly, do you think Clay’s hot?

*snorts* I may not like weres much overall, but I have eyes.

About Graced:
City Guard Elle Brown has one goal in life: to protect her kid sister, Emmie. Falling in love–and with a werewolf at that–was never part of the deal.

Life, however, doesn’t always go to plan, and when Elle meets Clay, everything she thought about her world is thrown into turmoil. Everything, that is, but protecting Emmie, who is Graced with teal-colored eyes and an unknown power that could change their very existence. But being different is dangerous in their home city of Pinton, and it’s Elle’s very own differences that capture the attention of the Honorable Dante Kipling, a vampire with a bone-deep fascination for a special type of human.

Dante is convinced that humans with eye colors other than brown are unique, but he has no proof. The answers may exist in the enigmatic hazel eyes of Elle Brown, and he’s determined to uncover their secrets no matter the cost…or the lives lost.