Fantasy Catching Up With Laura Bickle, author of Dark Alchemy

Catching Up With Laura Bickle, author of Dark Alchemy 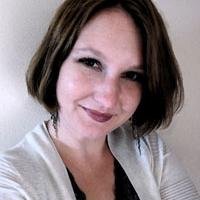 I really enjoyed Laura Bickle’s new book, Dark Alchemy, and she was kind enough to stop by and answer a few of my questions about the book, and more!
***************************************
I loved Dark Alchemy, and thought it was a wonderfully unusual read. What gave you the idea for the story?
A couple of years ago, my husband and I took a trip to Yellowstone. It’s truly a magical place – everything is larger than life. The sky is bigger, the mountains are bigger, and the critters are just amazing. There’s a cave nicknamed “Dragon’s Breath” that sounds exactly like a dragon huffing as it belches steam. We came across a beaver family living near a roadside culvert…picture baby beavers the size of Coke cans hauling twigs with their parents. And the chuckwagon breakfasts…OMNOM.

The whole land is alive in a very different way, and I wanted to write about what it would be like to approach it from a stranger’s perspective.

Was there a particular town that inspired Temperance, Wyoming?
I did not run across a town like Temperance – but I would love to find one!

For the story, I wanted to create a town that had hung on by its fingernails since the end of the Gold Rush. Temperance was founded by an alchemist who conjured enough gold to keep the town’s economy going. After his death, some of his alchemical experiments roam the countryside. They’re forgotten, but no less lethal. You wove Native American lore and more into the story. What kind of research did you do for the book?
Raven and Coyote figure prominently in many legends, and I couldn’t resist working ravens and coyotes into Dark Alchemy. Petra Dee, the protagonist, has acquired a coyote companion. And ravens are the familiars of the local undead, the Hanged Men. Both ravens and coyotes are tricksters in Native American mythology, and that was always in the back of my mind when writing about them.

In particular, I did some research on ravens and shapeshifting. Without giving too much away, the Hanged Men use this ability in a very unusual way that allows them to spy on the goings-on in Temperance.

I know why I rooted for Petra, but what do you think makes her a relatable heroine?
Deep down, Petra believes that she’s the world’s biggest screw up. She believes that she destroys everything she touches, and she’s got an armor of boundaries in place. Most of that comes from fear, but she does let some folks in…like Sig, the coyote who turns up on her doorstep.

She doesn’t have any super powers or magical abilities. She’s not The Chosen One. I like to think of Petra as an everywoman trying to get along in a messed-up world in the best way she can, whether it’s trying to help the underdog or wrestling a flea collar on her coyote friend.

As an imperfect person, I related to that, and I hope that readers will, too.

I appreciate that you didn’t take the “easy” direction with this story. Obviously, without giving anything away, did you already know how it would end when you started writing it?
I think the ending makes sense for the characters, the world, and is a nod to the Western genre. I have to give full credit to my editor, Rebecca Lucash, for the opportunity to be unrestricted with the ending. She encouraged me to venture into uncharted territory. I personally prefer unpredictable endings – to me, there’s nothing worse than picking up a book and knowing how it’s going to wrap up within the first five pages.

Are there plans for more books set in this world (crosses fingers)?
I love the world of Temperance, and I think there’s a lot more to explore with this world and the history of alchemy. If the opportunity presents itself, I’d love to write more books!

It’s been a while since we’ve caught up… Have you read any good books lately? Is there anything that you’re looking forward to reading this year?
I just finished Volumes 1 and 2 of SAGA, by Brian K. Vaughan and Fiona Staples. I’m just diving into Volume 3. Lying Cat, the sidekick of The Will, is my favorite character. She’s a walking feline lie detector with one line: “Lying.” I adore her.

What’s next for you?
I’ve got a couple of fantasy projects that I’m working on. Fingers crossed and stay tuned!

About Dark Alchemy:
Some secrets are better left buried …

Geologist Petra Dee arrives in Wyoming seeking clues to her father’s disappearance years ago. What she finds instead is Temperance, a dying western town with a gold rush past and a meth-infested present. But under the dust and quiet, an old power is shifting. When bodies start turning up—desiccated and twisted skeletons that Petra can’t scientifically explain—her investigations land her in the middle of a covert war between the town’s most powerful interests. Petra’s father wasn’t the only one searching for the alchemical secrets of Temperance, and those still looking are now ready to kill. Armed with nothing but shaky alliances, a pair of antique guns, and a relic she doesn’t understand, the only thing Petra knows for sure is that she and her coyote sidekick are going to have to move fast—or die next.