Historical Fiction A Chat with David Morrell, Author of Inspector of the Dead (Thomas De Quincy)

A Chat with David Morrell, Author of Inspector of the Dead (Thomas De Quincy) 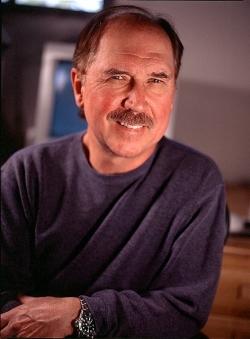 David Morrell is a legend, and one of my favorite authors. He’s the author of the book that inspired the film Rambo (First Blood), and since then, he’s written over 30 books. Recently, he’s released the brilliant Thomas De Quincy series, with Murder as a Fine Art, and Inspector of the Dead (out today!). I’m so excited that I got a chance to interview David, so please give him a very warm welcome!

I’ve been a big (huge) fan of yours for over 20 years, when I picked up my father’s copy of your espionage novel, The Brotherhood of the Rose, and realized how wonderfully complex and exciting your work is. Now with Murder as a Fine Art and Inspector of the Dead, you’re writing about the Victorian era. The Thomas De Quincey series is phenomenal, and I love that 1850s London is your setting. What do you find most fascinating about Thomas De Quincey and this time period?
De Quincey was one of the most brilliant literary personalities of the 1800s. He wrote the first book about drug addiction: Confessions of an English Opium-Eater (1821). He invented the word “subconscious” and anticipated Freud’s psychoanalytic theories by more than fifty years. He also invented the true-crime genre when he recreated the infamous Ratcliffe Highway murders of 1811 in his sensational essay, “On Murder Considered as One of the Fine Arts” (1854). He inspired Edgar Allan Poe, who in turn inspired Sir Arthur Conan Doyle to create Sherlock Holmes. He helped establish the reputations of Wordsworth and Coleridge at a time when they were ridiculed. Really, he amazes me.

As for 1850s London, I’m fascinated by the era’s schizophrenic attitude. Drapes were constantly kept closed, because the Victorian middle- and upper classes were obsessed with privacy. They had a public personality and a private one. They emphasized the surface of things: proper manners, good breeding, and a respectable appearance. You could be a monster in your home. That was nobody’s business. The only crime was the shame of being found out. The drapes on the windows were like the drapes to their inner selves. What made you decide to set Inspector of the Dead during the Crimean War?
The first De Quincey novel, Murder as a Fine Art, takes place in December of 1854. For the sequel, I looked a few months ahead and realized the impact of the Crimean War on the Victorian era. England hadn’t been in a war since the early 1800s. British officers were woefully unprepared. Enlisted men starved or froze to death from wearing summer uniforms in winter blizzards or else died from cholera in appalling sanitary conditions. The world’s first war correspondent, William Russell, wrote devastating reports for the London Times, causing such outrage that the government collapsed. For a week, nobody was in charge. I decided that someone would use that opportunity to try to assassinate Queen Victoria.

One of the things that really caught my attention was the incredulity (frequently experienced by Detectives Becker and Ryan) that anyone of the upper class could possibly be responsible for violent crime. Do you know when this belief finally started to dissipate?
As far as the middle and upper classes were concerned, only the working class and the poor were capable of violent crimes. What’s more, constables were considered to be laborers, which meant that the middle and upper classes were suspicious about them. A police officer wouldn’t dream of accusing someone who was wealthy or who belonged to the peerage. That’s one of De Quincey’s functions in these novels—to urge the police to think the unthinkable. I’m not sure that this prejudice ever went away. But in literature, things did change. So-called sensation novels became popular in the 1860s. They’re the start of the modern thriller, and they proposed that the truly horrific crimes were committed behind the closed draperies of the expensive houses of the rich and powerful. It’s worth noting that the De Quincey novels are my versions of sensation novels, excellent examples of which are Wilkie Collins’s The Woman in White (1859) and The Moonstone (1868).

The modern methods of crime solving were in their infancy during this time period. Preserving a crime scene was very new, as were many other methods. Was it a challenge to work within these constraints while writing these books?
Far from being a challenge, the limited investigation methods were fun to explain. London’s Metropolitan Police Force was founded only in 1829. Its detective branch came along thirteen years later—in 1842. Basically, the police were making it up as they went along, and that inventiveness is what I wanted to dramatize. In Murder as a Fine Art, I make a big deal about plaster impressions of footprints. In Inspector of the Dead, I emphasize that photography—only recently developed—could be an investigative tool. As a bonus, my characters are blessedly free of cell phones and actually speak face-to-face with characters from whom they obtain information.

All of the characters in this series are wonderful, but my favorite is Emily De Quincey. Was it your plan at the outset to make her such a big part of the story, especially in a time period that was very much a man’s world?
De Quincey really had a 21-year-old daughter named Emily. From the start, I knew that the novels would depend on her. He’s a drug addict, after all. Yes, he’s brilliant and witty and he understands the twisted minds of murderers. But he’s still a drug addict. Many of De Quincey’s scenes are presented from her viewpoint. My logic was that if readers liked Emily, then they would share her affection for her father. She’s the mainspring of the books. I vividly recall the day when I needed to start writing from her viewpoint. I admit to being nervous, and then suddenly this tone came to me, almost as if I were hearing the voice of a young woman who was independent and irreverent. Her attitudes are modern, yes, but they’re based on those of mid-1800s women such as Amelia Bloomer, whose name was applied to a dress that had trousers under it and allowed women freedom of movement. Emily wears one of those dresses. You also brought Queen Victoria to vivid life, and in fact when I was finished, I read as much about her as I could get my hands on. What do you find most interesting about her and her reign?
When Victoria was a child, her mother taught her to have a regal bearing by putting a sprig of holly under her collar. Holly is very sharp. Victoria could avoid its pain only by standing extremely straight. It’s that stoicism under pressure that I admire about her. Her husband, Prince Albert, slouched, but Victoria never did. She was determined to bring dignity to the monarchy after the mistresses and illegitimate children of her forebears, King George IV and William IV. The proper manners and respectable appearance that I mentioned earlier were something that Victoria insisted upon. To provide a contrast with the excesses of previous monarchs, she even discouraged bright colors in clothing. Around her, men wore dark blue, gray or black. The prudishness and restraint of the era came directly from her (and from Albert, who wasn’t a lot of fun).

You spent a year researching the Thomas De Quincey books and have been writing a wonderful blog series for Mulholland called “Visiting Inspector of the Dead.” Have you actually been able to visit some of the places you’ve written about?
My research into De Quincey and 1850s London has now lasted five years, with more to come. I became friends with two De Quincey biographers: Grevel Lindop (The Opium-Eater: A Life of Thomas De Quincey) and Robert Morrison (The English Opium-Eater: A Biography of Thomas De Quincey). Grevel is the editor of a twenty-one volume edition of De Quincey’s work. He became my tour guide and showed me De Quincey places in Manchester, where De Quincey was born, and places in the Lake District that are associated with De Quincey, particularly famed Dove Cottage, where De Quincey lived after Wordsworth moved out. I also visited locations in London that are associated with De Quincey. I have a big map of 1851 London, and I’m able to get around on it as if I lived back then. Here’s a link to a photo-essay about eerie Lord Palmerston’s house, one of the major locations in these novels: http://www.mulhollandbooks.com/2015/02/02/visiting-inspector-dead-eerie-lord-palmerstons-house/.

I love that you make your villains very complex, not bad merely for the sake of being bad. You explore their pasts and what drives them to their dark deeds. Is this something you learned from De Quincey?
Another of his influential essays is called “On the Knocking at the Gate in Macbeth.” I used a sentence from it as an epigraph to Inspector of the Dead. “In the murderer worthy to be called an artist, there rages some great storm of passion—jealousy, ambition, vengeance, hatred—which creates a hell within him.” I took that sentence to heart and tried to make readers feel sympathetic toward the hell within my villains. With any luck, readers might even feel a temptation to weep for them. You’ve undoubtedly influenced many writers during your career, and have cited many of your own influences, but what are a few of your favorite current authors? Have you read any books lately that you’d recommend?
Most of my reading has been about Victorian subjects. I mentioned two sensation novels by Wilkie Collins—The Woman in White and The Moonstone. His No Name (1862) and Armadale (1866) are excellent also. But my favorite sensation novelist is Mary Elizabeth Braddon, whose Lady Audley’s Secret (1862) helped establish the sensation genre. These authors feel very modern to me.

What’s next for you (and Thomas De Quincey and Co.)?
I wrote a short story, The Opium-Eater, which is set in Grasmere in England’s Lake District, where De Quincey lived for many years. It’s about “the coldest of deaths and the reason De Quincey acquired his nickname.” It has an afterword with numerous photographs of the locations in the story, including Dove Cottage. Also I’m now working on a third De Quincey novel. One of my editors said that I was channeling him.

About Inspector of the Dead:
The year is 1855. The Crimean War is raging. The incompetence of British commanders causes the fall of the English government. The Empire teeters. Amid this crisis comes opium-eater Thomas De Quincey, one of the most notorious and brilliant personalities of Victorian England. Along with his irrepressible daughter, Emily, and their Scotland Yard companions, Ryan and Becker, De Quincey finds himself confronted by an adversary who threatens the heart of the nation.

This killer targets members of the upper echelons of British society, leaving with each corpse the name of someone who previously attempted to kill Queen Victoria. The evidence indicates that the ultimate victim will be Victoria herself.