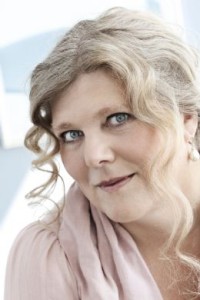 Please welcome Lene Kaaberbøl to the blog! Her new book, Doctor Death, will be out tomorrow, and she kindly answered a few of my questions about it, and more!

Will you tell us a little about Doctor Death and what inspired you to write it?
I wrote the first chapter in one long burst, without really being sure what it was I had started. Several things leaped to life simultaneously – the time (1894), the place (a fictional province in France), a theme of sorts (human and animal nature), and most of all, the observant, intelligent, yet oddly immature voice of Madeleine. For me, most stories start with an idea and character, never with an idea alone. I need someone to help me experience events, someone to be my eyes and ears. Madeleine was a little unusual in that she managed to be both eyes, ears, and voice without actually being present for the first few scenes, and it struck me that this would be her main predicament: Her gender and her youth would bar her from the places she most wanted to go unless she managed to be either very sneaky or very adamant. She is frequently both. At the back of my mind was the suspicion that this might turn into the “werewolf book” I had been wanting to write for some time; not the all-out, bloody-fanged, baying-at-the-moon kind, but rather a deep look at where humanity ends and the beast begins.

Why do you think readers will root for Madeleine Karno, and what did you enjoy most about writing her character?
I love her undaunted curiosity and her unique combination of vulnerability and courage. She never stops wanting to learn and know, even when staring down a gun barrel. She catalogs the horrors she meets with clinical precision as a way of keeping feelings at bay because she wants so badly to prove that she is not a feeble emotional female, and so she is often blindsided by her own natural instincts. What made you decide to write a book set in 1894, and what kind of research did you do?
1894 is a very interesting year in French history, fraught with drama; a presidential assassination, a horrid miscarriage of justice, riots, espionage and scandal. It is also the year young Marie Sklodowska, soon to become Madame Curie, causes quite a stir by wining her second degree from the Sorbonne and outshining most of the men. I had to do a huge amount of research, particularly into the medical details – writing this kind of fiction, you can’t even break somebody’s arm without checking whether plaster casts had been invented (they had – by Antonius Mathijsen in 1852) – but it was hugely enjoyable and kept rewarding me with gems I could use in the plot. Without the internet, this book would have taken many more years to write, not to mention frequent flyer miles. But today so many of the articles and documents I needed to see were available online in facsimile. To all intents and purposes, I was reading many of the same periodicals and medical journals that Madeleine and her father would have had available to them.

Why suspense? What do you enjoy most about reading, and writing, in the genre?
I love pushing my characters to the limit to see what they’ll do. People think writers are such gentle creatures; we’re not. We love watching people bleed and struggle, at least on the page. I like to think that this is because it is only in extremes that they show us who they are, but maybe it is really just the literary equivalent of pulling wings off flies to see if they can still get airborne …?

What authors have inspired you the most?
Although perhaps not the most relevant to Doctor Death, I would have to put Ursula K. LeGuin at the top of my list. She showed me that genre fiction – fantasy and SF in particular – can have characters quite as real as any other kind of fiction, and that including aliens, magic, and dragons in your line-up is no excuse for sloppy style. I think I’m on my fourth copy of Steering the Craft because I keep lending it to people and not getting it back.

If you could experience one book again for the first time, which one would it be?
Again, not so very Doctor Death-like, but I happen to think Astrid Lindgren’s Brother’s Lionheart is one of the best children’s books ever. I was in my late teens when I first came across it, but oh … to have been able to read that wonderful story as a child, with the sort of intensity only children bring to reading … I would have loved that book to bits.

What are you currently reading?
I’m about halfway trough Colm Tóibín’s Nora Webster. Next in line, Tony Parson’s The Murder Bag.

What’s next for you?
The next book out in the US will be The Considerate Killer, fourth in the Nina Borg series that I write with Agnete Friis (first one was The Boy in the Suitcase). However,what I’m currently working on is Madeleine’s third outing. The second one, The Living Flesh, has already been published in Danish and a couple of other languages.

About Lene Kaaberbøl:
Lene Kaaberbøl has been a professional writer since the age of 15, with more than two million books sold worldwide. Her collaborator, Agnete Friis, is a journalist by training. Their first collaboration, THE BOY IN THE SUITCASE, was a New York Times and USA Today bestseller, and has been translated into more than 30 languages.

About Doctor Death:
Strong-minded and ambitious, Madeleine Karno is eager to shatter the constraints of her provincial French upbringing. She wants to become a pathologist like her father, whose assistant she is, but this is 1894, and autopsies are considered unseemly and ungodly, even when performed by a man—hence his odious nickname, Doctor Death. That a young woman should wish to spend her time dissecting corpses is too scandalous for words.

Thus, when seventeen-year-old Cecile Montaine is found dead in the snowy streets of Varbourg, her family will not permit a full post-mortem autopsy, and Madeleine and her father are left with a single mysterious clue: in the dead girl’s nostrils they find a type of parasite normally seen only in dogs. Soon after, the priest who held vigil by the dead girl’s corpse is brutally murdered. The thread that connects these two events is a tangled one, and as the death toll mounts, Madeleine must seek knowledge in odd places: behind convent walls, in secret diaries, and in the yellow stare of an aging wolf.

Eloquently written and with powerful insight into human and animal nature, Doctor Death is at once a gripping mystery and a poignant coming-of-age story.