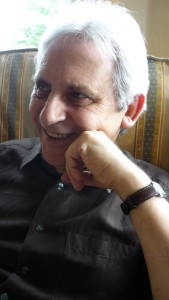 Please welcome John Love to the blog! His new book, Evensong, just came out in January and he stopped by to answer a few of my questions. Please give him a warm welcome!

**Also, courtesy of Night Shade Books, we’ve got one copy of Evensong to give away to one lucky US winner, so be sure to enter to win with the widget below the post!

I’ve heard great things about Evensong. What inspired you to write it?
It was quite an unusual process, and it’s nice to find someone who I haven’t already regaled (or bored) with it.

My wife and I went to an Evensong service in Rochester Cathedral in Kent. It was a beautiful summer evening and afterwards everybody went out into the Cathedral precincts where some tables had been set out for coffee. Halfway through my coffee I had this idea of a similar setting, where an unidentified woman comes to the Evensong service but doesn’t stop for coffee afterwards. She hurries away. She’s been to several previous Evensongs and has always hurried away afterwards, avoiding eye contact or indeed any other contact. Who she is, and why she comes there, is her back story which begins nearly a year earlier.

What is so unusual is that I’d got the whole of her back story, and the whole construction of the book, in less time than it took to swallow a mouthful of coffee. There was no blinding flash or feeling of revelation, but the whole book had sprung out fully formed – main plot, sub-plots, main characters, minor characters, settings, everything. I could see it in three dimensions, could (metaphorically) walk round it and study it from every angle, and it worked. It all hung together.

When I came to write it there was nothing major, and almost nothing minor, which was changed.

Will you tell us a bit about your future world in Evensong?
I love the SF genre. Whenever I have an idea for a book, SF is the automatic default option for expressing it. The genre gives more freedom to make philosophical or political points – to project features of the present on to the future – and it makes for a good read. It’s not impossible to do this in other genres, but it’s more possible in SF. Some of the reviews and reader responses have described Evensong’s universe as being dark and twisted, which I wouldn’t deny. But it’s not entirely dark and twisted. Some interesting technologies have started to answer (not completely, but partially) the questions of long-term clean energy supply. And fundamentalism, both religious and political, has been marginalised – again, not completely, but partially. The book’s universe is ambiguous and menacing, but there are also the elements of a kind of Enlightenment springing up here and there. I was tempted to go down that road a bit more, but I decided it would be outside the scope of the book.

What do you think makes Anwar Abbas a compelling character?
What made him interesting to me when I was writing him were his apparently contradictory qualities: he’s deadly but also vulnerable and obsessive. He has limited social skills and few friends, and perhaps to compensate he’s developed an interior life full of private routines and private jokes, and the (ultimately delusional) belief in his self-sufficiency.

Or, as a couple of the other characters put it, he’s got his head up his ass.

Did you do any particular research for the book?
I did some research into possible future sustainable energy sources and their attendant technologies. Room-temperature semiconductors. Linear induction coils,water rights, Congo, Congolese music. Evensong services. UN summit procedures and communique wordings.

There were some other subjects with which I was already familiar, because I like Boys’ Toys: possible electric propulsion systems for high-performance cars, VSTOL aircraft, MagLev trains, future architecture and building techniques.

And some other subjects which feature in the book purely as a personal indulgence because I like them, and because they added a certain quirkiness: Doctor Samuel Johnson, Shakespeare’s Sonnet 116, Brighton and its Royal Pavilion.

You have a background in the music industry, but have you always wanted to write? Will you tell us a little about that progression?
The actual writing of Faith (my first novel) took about fifteen months, but I’d had the idea in my head for a few years before that. My job in the music industry (I was Managing Director of PPL, the world’s largest record industry copyright organisation) meant I never properly sat down to write it until after I retired. Before then, it existed as disconnected scraps of dog-eared paper. I’ve kept some of them, for sentimental reasons.

I’ve always liked writing, the putting together of words, marshalling and organising them to make a point or deliver a message or argument. My work involved a lot of writing, usually legal documents in furtherance of large precedental legal cases where millions in royalties were at stake, or business documents in support of large commercial negotiations. I always knew I could put words together for those purposes, but I wanted to find out whether I could do the other things needed to write a novel: characterisation, pacing, description, and so on.

In retrospect I often wonder if I let my work intrude for too long. Maybe I should have tried writing novels before I actually did. I don’t know whether I’d have got them published, though. They’d probably have been quite different.

What do you like to see in a good book? Is there anything that will make you put a book down, unfinished?
Almost nothing would make me put a book down unfinished. Even if I hate it, I have to finish it so I can know exactly why. What I hate most is if I get the impression that the author isn’t trying to communicate with, or engage, the reader: that he/she is performing some intellectual exercise to which the reader is only admitted, condescendingly, as a guest.

I like any book that manages to be both literature and a page-turner. Crime and Punishment, for example, works equally well as serious literature about Life, The Universe And Everything, and as a whodunnit. Except that the person who dunnit is known at the outset and has a cat-and-mouse game with the equally clever examining magistrate, wanting both escape and capture.

What authors have inspired you the most?
Apologies in advance: this will be quite a long answer. It’s a question I often get asked, so I’ve got a long list to which I’m constantly adding.

Hitchhiker’s Guide to the Galaxy is one of my SF favourites, in all its early forms: the original BBC Radio 4 programme, the equally original BBC TV adaptation, and Douglas Adams’ marvellous “Trilogy of Five Novels.”

Some other SF favourites are:

If you could experience one book again for the first time, which one would it be?
Probably King Lear. Or Crime and Punishment. What are you currently reading?
I’ve just finished reading a review copy of Cash Crash Jubilee, by Eli K P William. Skyhorse asked me to read it and supply a cover blurb if I liked it. They sent it to me because of my career in the music industry, which was intimately involved with intellectual property, and Cash Crash Jubilee is about just that – about how, in the future, technology could enable a sort of all-pervading consumerism to develop where every daily action, even something like sighing or blinking, can be made into intellectual property which is appropriated by shadowy mega-corporations who licence it commercially. The premise is both ridiculous and horrifying, and I’m not sure if it’s a satire or a thriller, but it works brilliantly as either. It’s his first novel and it’s due out later this year.

Before that I read two books whose themes are very similar though they’re as different as any two books could possibly be: The Glass Bead Game by Hermann Hesse, and The Player of Games by Iain M Banks. They start out from a similar premise: a far-distant future where society is obsessed with proficiency at game-playing, and where the game (whose rules are never explained by the author, and are almost irrelevant) make the game a metaphor for society and real life. The Glass Bead Game (which won the Nobel Prize for Literature in 1942) is slow-moving, cerebral, subtle and oddly compelling, with an absence of sex and violence. The Player of Games is a Culture novel, and has some of those qualities but definitely not the absence of sex and violence. I’d read both novels before but I wanted to re-read them concurrently to compare how two great authors can start from a similar point and arrive at such different destinations.

What’s next for you?
I’m writing a fantasy novel. It doesn’t have any orcs, elves, dragons, sorcerers or dark malign gods, only people. But “fantasy” is probably the most convenient shorthand description because it’s set in a completely imaginary world at the same approximate level of development as ancient Greece or Rome. It even has a map.

Want to win a copy of Evensong? Fill out the widget below, and I’ll pick a winner on or around the 6th (US only) Good luck!

About Evensong:
A near-future thriller where those who protect humanity are not always completely human.

The future is a dangerous place. Keeping the world stable and peaceful when competing corporate interests and nation-states battle for power, wealth, and prestige has only gotten harder over the years. But that’s the United Nations’ job. So the UN has changed along with the rest of the world. When the UN’s “soft” diplomacy fails, it has harder options. Quiet, scalpel-like options: The Dead—biologically enhanced secret operatives created by the UN to solve the problems no one else can.

Anwar Abbas is one of The Dead. When the Controller-General of the UN asks him to perform a simple bodyguard mission, he’s insulted and resentful: mere bodyguard work is a waste of his unique abilities. But he takes the job, because to refuse it would be unthinkable.

Anwar is asked to protect Olivia del Sarto, the host of an important upcoming UN conference. Olivia is head of the world’s fastest-growing church, but in her rise to power she has made enemies: shadowy enemies with apparently limitless resources.

Anwar is one of the deadliest people on earth, but her enemies have something which kills people like him. And they’ve sent it for her. It’s out there, unstoppable and untraceable, getting closer as the conference approaches.

As he and Olivia ignite a torrid affair, Anwar must uncover the conspiracy that threatens to destroy her, the UN, and even The Dead.