Interviews Catching up with Jamie Mason, author of Monday’s Lie

Catching up with Jamie Mason, author of Monday’s Lie 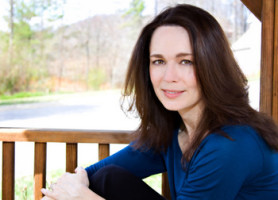 I’m a huge fan of Jamie Mason’s. I got the pleasure of reviewing both Three Graves Full and her new book, Monday’s Lie for Library Journal, and they were both fantastic, so I’m thrilled that she took a moment to catch up with me about the new book, and more! Read her books, ya’ll-she’s got the touch.

As you know, I loved Monday’s Lie. What inspired the story, and what did you enjoy most about writing it?
There were a couple of things that inspired Monday’s Lie (and thank you for loving it; that thrills me.) Firstly, I heard a lecture at a writers conference, years ago, where an agent with the FBI’s fugitive apprehension unit mentioned in passing that if you studied a person’s photo upside down for a while, it didn’t matter what he did to change his appearance – glasses, hairstyle, hat, beard, or just plain ol’ aging – you’d be able to recognize him instantly. That kind of begged to be in a book.

Then a good bit later, in the schizophrenic moments of just drifting off to sleep, a line came to me, My mother said never to keep a man for more years than you could count on your fingers. And I imagined that she was missing two fingers on one hand. That amused me and made me crave a badass heroine who was also effortlessly maternal. Annette Vess formed up in my head and we were off to the races. I’ve never had more fun writing than in the invention of and introduction to Annette Vess. She’s very special to me. I love that, in addition to the “thriller” angle, you also explored a very complicated mother/daughter relationship. Was this your intent from the beginning or did it just evolve organically as you wrote?
I don’t know. Early on, it seemed to me a very late coming-of-age story. It felt like that’s what I wanted to talk about. Dee re-parents herself with memories of her mother and learns another way to be. It was an irresistible concept. Is it even possible to remember a complicated parent and get something different out of it the second time (or hundredth time) around?

What kind of research did you do for the book?
Not that much, really. There were snippets of spycraft that came from the aforementioned lecture and some nominal reading and poking around, asking questions, but it was great fun just to make stuff up. It’s possibly the greatest perk of the job – anyone will tell you anything if you say you’re writing a book.

What is your writing process like? How has it evolved or changed since Three Graves Full?
Not much has changed. I would like to be more disciplined and regular in the hours I put in, but at this point, I still have a propensity to put in marathon sessions and forego the steady pace that seems to make more sense. Hopefully, I’ll have time and reason to work on this character flaw of mine.

What’s something that you know now that you wish you’d known when you first got published, and what advice would you give to an aspiring author?
To be fair, the research into the process and the business end of things that I’ve done has served me very well, as has the advice I’ve listened to. Sober (literally and philosophically) attention to what’s out there will inform your path. I would say watch the writers you admire. They’ve cut a swath before you. The words are what make you different, so there’s no harm in emulating them.

It’s been a while since we caught up… Have you read any good books lately? Is there anything you’re looking forward to this year?
Oh, lordy. Sure. There are a few I love. Normal, by Graeme Cameron. The Long and Faraway Gone, by Lou Berney. The Secret Place, by Tana French. Liar, Temptress, Soldier, Spy, by Karen Abbott. All The Wild Children, by Josh Stallings. The Accident, by Chris Pavone.

I’m looking very forward to Hush, Hush, by Laura Lippman and At The Water’s Edge, by Sara Gruen.

What’s next for you?
Oh, hopefully please something. I’m working on a new novel. Fingers crossed. I love this sandbox. I want to play.

About Monday’s Lie:
Dee Aldrich rebelled against her off-center upbringing when she married the most conventional man she could imagine: Patrick, her college sweetheart. But now, years later, her marriage is falling apart and she’s starting to believe that her husband has his eye on a new life…a life without her, one way or another.

Haunted by memories of her late mother Annette, a former covert operations asset, Dee reaches back into her childhood to resurrect her mother’s lessons and the “spy games” they played together, in which Dee learned memory tricks and, most importantly, how and when to lie. But just as she begins determining the course of the future, she makes a discovery that will change her life: her mother left her a lot of money and her own husband seems to know more about it than Dee does. Now, before it’s too late, she must investigate her suspicions and untangle conspiracy from coincidence, using her mother’s advice to steer her through the blind spots. The trick, in the end, will be in deciding if a “normal life” is really what she wants at all.

With pulse-pounding prose and atmospheric settings, Monday’s Lie is a thriller that delivers more of the “Hitchcockian menace” (Peter Straub) that made Three Graves Full a critical hit. For fans of the Coen brothers or Gillian Flynn, this is a book you won’t want to miss.