Fiction Interview and Giveaway: Phil Hogan, author of A Pleasure and a Calling

Interview and Giveaway: Phil Hogan, author of A Pleasure and a Calling 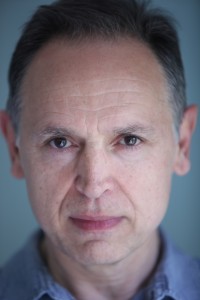 Please welcome Phil Hogan to the blog! He kindly stopped by to talk about his new book, A Pleasure and a Calling, and courtesy of Picador, we’ve got a copy to give away to one lucky winner (US only), so be sure to check out the details at the bottom of the post!

Will you tell us a bit about your new book, A PLEASURE AND A CALLING, and your very unusual main character, Mr. William Heming?
Put simply, the book is about the increasingly desperate doings of a tweedy small-town English estate agent, William Heming, who has kept a key to every house he has ever sold. There’s nothing he likes better than rummaging through other people’s private things. OK, he might help himself to a toasted cheese sandwich while he’s at it, or take a few photographs for his files, but he does tidy up after himself. No one’s going to come home to a stack of dirty dishes.

Heming loves his leafy, crime-free town. The way he sees things – and this is very much a story in which everything is seen through his eager, roving eyes – it’s his job to keep it that way. He will crack down on antisocial behaviour. You might find yourself cheering him on (when you’re not wondering what kind of a monster he is). Without giving too much else away, the book involves a sort-of romance; oh and there’s a dead body practically on the first page. Modesty aside, I’d say this book is probably more exciting than the real business of selling houses.

You have a background in journalism, but have you always wanted to write fiction? Will you tell us a bit about that progression?
I did always want to write fiction, though it took me about a hundred years to get round to it. Suffice it to say, more journalists plan to write novels than actually write them. One of the drawbacks is that writing a book takes a long time and there’s no guarantee you’ll get paid for it. And journalism, once you’ve elbowed your way into it, can be a too comfortable place to roost: they give you money and a byline to flatter your ego and convince you that even TV reviewing (in my case) is a pretty serious business. I was nudged in my transition to books – some years ago now – by interest from an agent, who liked the ‘fatherhood’ column I was writing for the Observer’s magazine at the time. Why not try a humorous novel? she asked. Three books came and went, four including a book of collected columns (Parenting Made Difficult), now unaccountably out of print. After that came a lengthy pause in my literary career. A Pleasure and a Calling, I should say, is very different from those earlier efforts, which were Hornby-esque variations on the then popular themes of men behaving badly and getting their comeuppance.

What kind of research did you do for A Pleasure and a Calling?
Almost no kind. You may be surprised to discover that, in Britain, anyone can become an estate agent. All you need is a clipboard and one of those laser beams they use to measure rooms. So it’s not that hard to imagine yourself as one. The difficulty was to resist sliding into parody. Property-speak is beguilingly funny. But with many novels you don’t really need any more research than it takes to create a brief illusion of authenticity. You can liken it to a movie set – the viewer seeing just what’s in the frame rather than the director who’s only two feet away or the cables and booms and technicians wandering about. I might add too that, with a first-person narrator, you only have to know as much as he does. Obviously it would have been harder if Heming had been a particle scientist.

Why suspense? What do you enjoy most about writing, and reading, in the genre?
To be honest I was surprised to discover that I had written a suspense novel. I didn’t really set out to; rather I followed the idea where it took me. I felt it could be a page-turner if I did it properly, though I think it ended up as something of a hybrid. This I think explains why some booksellers have it as a crime novel, others as a thriller, while others have just shelved it under general fiction. My German publisher has focused hard on its ‘black humour’. As I mentioned earlier, it’s the first book of this kind I have tried, and I enjoyed writing it once I realised that the key (no pun intended) was the character – that the story would turn on Heming revealing himself to the reader. I haven’t read much in the genre. I liked Patricia Highsmith’s first Ripley book. I have a lot of catching up to do. Meanwhile I have been making my way through a box set of old Hitchcock films. Brilliant.

What are a few of your biggest literary influences?
My favourite authors tend to be American – John Updike, Philip Roth, James Salter, Richard Ford, Jonathan Franzen. As a young person I grappled with James Joyce and read Henry Miller – both made me want to write. Obviously it’s one thing to aspire to great writing, quite another to get anywhere near to it. It’s more a hope than an expectation that some of it will rub off.

What were a few of your favorite reads during 2014?
In no particular order:
To Rise Again at a Decent Hour / Joshua Ferris
The Postman Always Rings Twice / James M Cain
Where I’m Reading From / Tim Parks (a great collection of essays)
Leaving the Atocha Station / Ben Lerner
Travelling Sprinkler / Nicholson Baker
Bark / Lorrie Moore

What are you currently reading?
Ben Lerner’s new book, 10.04. He’s very smart and therefore sometimes hard work. I’m also reading a book about psychopaths, which I hope will be instructive.

What’s next for you?
Getting on a train and going to work. I have a desk job subediting at the Observer, on top of my shifts as TV critic. But I want to write another novel, I guess in the same ballpark as A Pleasure and a Calling.

We’ve got 1 copy of A Pleasure and a Calling to give away to a US winner, so fill out the widget below, and I’ll pick a winner on (or about) Jan. 31st!
a Rafflecopter giveaway

About A Pleasure and a Calling:
Mr. Heming loves the leafy English village where he lives. As a local real estate agent, he knows every square inch of the town and sees himself as its protector, diligent in enforcing its quaint charm. Most people don’t pay much attention to Mr. Heming; he is someone who fades easily into the background. But Mr. Heming pays attention to them. You see, he has the keys to their homes. In fact, he has the keys to every home he’s ever sold in town. Over the years, he has kept them all so that he can observe his neighbors, not just on the street, but behind locked doors.

Mr. Heming considers himself a connoisseur of the private lives of others. He is witness to the minutiae of their daily lives, the objects they care about, the secrets they keep. As details emerge about a troubled childhood, Mr. Heming’s disturbing hobby begins to form a clear pattern, and the reasons behind it come into focus. But when the quiet routine of the village is disrupted by strange occurrences, including a dead body found in the backyard of a client’s home, Mr. Heming realizes it may only be a matter of time before his secrets are found out.

A brilliant portrait of one man’s obsession, A Pleasure and a Calling by Phil Hogan is a darkly funny and utterly transfixing tale that will hold you under its spell.