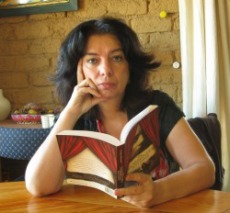 welcome Sophie Masson to the blog! More than 50 of her novels have been published in Australia, and her brand new urban fantasy, Trinity (Momentum/Pan Macmillan), just came out earlier this month. Sophie kindly answered a few of my questions about the book, and more!

Will you tell us a bit about Trinity and what inspired you to write it?
Trinity is part urban fantasy, part thriller, part romance, but at its heart it’s a novel about the unexpected erupting into a life and the huge transformations that brings. When the novel starts, the main female character, Helen Clement is uncertain, nervous, uneasy about a lot of things—she feels like she’s been living in a ‘grey world’–but arriving in Russia changes all that, as passion, excitement, danger and terror explode into her life and she is forced to cope with things she could never have imagined—both natural and supernatural. For better or for worse, nothing will ever be the same again for her. As well as being a gripping story, it’s also about the addictive magic of a place like Russia—and I guess that’s what inspired me in the first place. Going to Russia, a country I’d been fascinated about for so long, was like the spark that lit the bonfire!

Why did you choose Russia as the setting for Trinity? What kind of research did you do for the novel?
I chose it because not only have I been fascinated by Russia since I was a kid, but also it’s the perfect setting for urban fantasy—it’s a country where magic and technology mix naturally, where people believe all kinds of weird and amazing things but are also very down to earth and modern. I did heaps of research—on the spot in Russia(which I’ve visited twice) plus a lot of reading of all kinds, everything from Russian history to books about magic and the occult and also lots of stuff on the Internet. I had such fun doing that research—it’s one of the great things about being a writer, you get to learn so much! 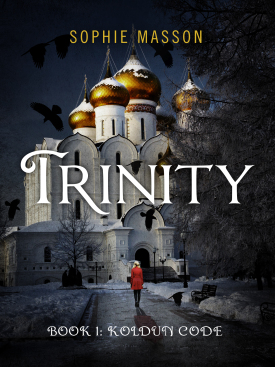 Why do you think readers will root for Helen and Alexey?
Because they are very human—their dilemmas are understandable, and they are also full of possibility, of that human desire to build something beautiful and wonderful. Helen as I mentioned earlier is uncertain and nervous at the beginning but she grows a lot in strength as the story goes on, and finds her own courage and meaning; and Alexey is just one of those fantastic people who know what they want and who dream big dreams and can sweep people along with them. But he’s also sensitive and especially, he is not scared—or he does not allow fear to rule his life. He dares to dream—and so he inspires people—his staff at Trinity, and of course, Helen.

What did you enjoy most about writing Trinity?
I loved the whole experience—creating the characters, the setting, the story. It just feels like everything came together so well in it!

You’re the author of many books for children and adults. How do you think you’ve grown as a writer over the course of your career?
I’ve become more confident, I know my own strengths and weaknesses, and how to build one up while making sure the other doesn’t trip me up! I feel that my life experiences and my reading has also greatly enriched my writing.

What authors or novels have inspired you the most in your writing, and in life?
For this book, I’ve have to say ‘Michel Strogoff‘ by Jules Verne—I read this fabulous adventure novel as an 11 year old, and it inspired a lifelong fascination with Russia and its extraordinary culture. (I read it in its original French, as I’m of French background)Other great authors who have inspired me are Alexandre Dumas, Shakespeare, Dostoyevsky, Agatha Christie, Christopher Koch(see below), Anya Seton, Mary Stewart, Sigrid Undset, and many many others! As well, I am very influenced by fairy tales, myths and legends—I read hundreds of them as a kid and still read a lot of them. And these days I read a lot of modern urban fantasy and crime novelists too—from Michael Robotham to Sergei Lukyanenko, Jim Butcher to Rith Rendell, Peter Higgins to Jo Nesbo.

What are you currently reading?
Currently I’m reading The Thirteenth Tale by Diane Setterfield—a fantastic mystery!

If you could experience one book again for the very first time, which one would it be?
The Three Musketeers—I was in love with brave, gallant d’Artagnan and would love to meet him again for the first time!

As an Australia based author, which Australian author would you like to see get more international recognition?
Apart from me you mean? 🙂 Well, there are many fabulous authors who I think should be better known internationally, but just to select one—the late Christopher Koch, who wrote amazing multi-layered novels, gripping stories in which the supernatural played an important yet understated part. He’s well-known for The Year of Living Dangerously, but my favourite is The Doubleman, which is about the strange magic of music and the eruption of the otherworld into ordinary lives.

What’s next for you?
At the moment, I’m writing the second Trinity book, The False Prince. It’s as multi-layered and twisty-turny as the first, and I’m thoroughly enjoying writing it! That will come out late next year. I also have a YA novel coming out next year, next in my fairytale thriller series which began with Moonlight and Ashes(2012), Scarlet in the Snow(2013) The Crystal Heart(2014). Each is a reimagining of a fairytale, set in an alternative world—and the one next year, Hunter’s Moon, is a rather dark re-imagining of Snow White.

About TRINITY:
I am in a world deeply strange and strangely deep, a world as different from my old life as it’s possible to be, and it feels completely natural.

An unexpected encounter with a handsome stranger in a Russian wood changes the life of 22-year-old traveler Helen Clement forever, catapulting her into a high-stakes world of passion, danger, and mystery. Tested in ways she could never have imagined, she must keep her own integrity in a world where dark forces threaten and ruthlessness and betrayal haunt every day.

Set against a rising tide of magic and the paranormal in a modern Russia where the terrifying past continually leaks into the turbulent present, Trinity is a unique and gripping blend of conspiracy thriller, erotically charged romance and elements of the supernatural, laced with a murderous dose of company politics. With its roots deep in the fertile soil of Russian myth, legend, and history, it is also a fascinating glimpse into an extraordinary, distinctive country and amazingly rich culture.