Kaaron Warren is the author of three novel (all of which are AR titles) and numerous short story collections, so as part of AR’s Backlist Boost series, I’d like to welcome her to the blog! She was kind enough to answer a few of my questions about herself, and her writing! 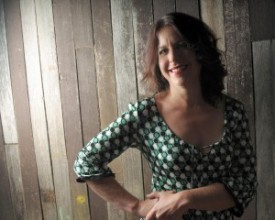 Kaaron, welcome to the blog! You’ve got numerous books and various short story collections under your belt, and have wanted to write from a young age. What’s one of the first things you remember writing?
School spelling lists always bored me (I’m sure they bore everybody), so instead of writing single sentences, I’d turn them into stories. I’m not sure the teachers ever noticed! One I found again recently was about a girl who went missing on a large cruise ship.

She was found, dead, in a funnel.

So yeah, it was always the dark side!

The first short story I consider complete is one called “The Animode’s Revolt”, written when I was 14. It’s about a daredevil stuntman, and what happens when his body gets tired of the risk-taking. It was pretty dramatic. Here’s a snippet:

Ral had finished talking and taken rest some time ago.
Now he was up and giving his Animodes last minute instructions.
“Not long to go. You know what to do the second I say, ‘NOW’. OK?”
“OK!” a million, a billion, a million billion voices screamed. They were ready.

Out of your books, do you have a favorite?
I really don’t! Slights is the most successful novel, but I’m really happy with the world and the people I created in Walking the Tree. I love Mistification for all the stories, and the craziness, the magic, the food and the extras.

For my short story collections, they all have stories I’m really proud of. Though Splintered Walls garnered the most awards, if that means anything!

The Gate Theory helped launch a new publisher, Cohesion Press, and I do like the way those five stories work together.

Slights is one of the scariest books I’ve read. What’s one thing that truly terrifies you?
One?

The idea that ghosts exist, and that they are anchored to this realm through unfinished business, guilt, anger or regret.

The idea that I could be stuck, myself. Women that write horror sometimes don’t get the recognition they deserve. What are a few of your favorite women of horror?
So very many I could name.

Early on, Daphne du Maurier, Celia Fremlin, E. Nesbit (her “Man-size in Marble” haunts me to this day) and Rosemary Timperly.

What is your writing process like? Is there anything you need to get in a creative mood?
I trained myself early on (with full-time jobs, kids, life) to not rely on time or place to be in the writing mood.

So I can write anywhere, anytime, if I need to.

That said, I do have an office now. It Is Gorgeous. I can leave pages and research out, so I can get straight back into it without having to set things up again.

If I’m stuck trying to get my brain into creative mode, after all the ‘everyday life’ stuff, I’ll do a couple of fun writing exercises. Descriptive pieces, to get the juices flowing.

At the moment, I have a Fellowship at our Old Parliament House, a building of 500 rooms, with secret places I have access to. To get me started, some mornings I’ll go and sit in a darkish and quiet corner and simply write what I’m feeling, what I’m hearing or smelling. That very quickly puts me in the mood.

If you could experience one book again for the first time, which one would it be?
There would be many! But I’ll never forget my open-mouthed, cannotstopreading of Rebecca. I re-read this book every couple of years, and each time it’s a different experience. But to go back and read it for the first time? That would be amazing. Thinking about it, it’s one of the defining moments of me as writer. Because that book is something I aim for each time. That perfection of mood and character.

When you’re not writing, and manage to find some free time, how do you like to spend it?
I love going to school and church fetes. I find bizarre books like The Encyclopedia of Ancient & Forbidden Knowledge, by Zolar. I find fabulous designer dresses. And I find lots of inspiration for stories in the White Elephant stalls. My project for Old Parliament House was inspired by a set of postcards from a school fete, all written in the 1920s by one of Australia’s best-known landscape artists, at the time. Now, most people don’t know who he is.

What are you working on now? Is there anything else you’d like to share?
I’ll talk again about my Fellowship here! The artist of the postcards is William Ashton, who was a favourite artist of one of our Prime Ministers, Sir Robert Menzies. Ashton died in 1963, and his second wife, Lady Winifred, was a victim of an Australian serial killer, John Glover, in 1989.

So I’m researching artists, Prime Ministers, John Glover, and much much more, with the intention of writing a crime novel. With ghosts. Because, when I’m hiding in those dark and quiet corners of Old Parliament House, I swear people talk to me.