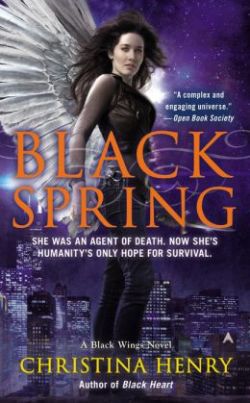 Black Spring by Christina Henry (Ace, Oct 28th, 2014)-There are inevitable spoilers for past books here, so read at your own risk!

Maddy Black is pregnant with Gabriel’s child and could give birth any moment (seriously, this kid is growing much faster than a human baby), and her hopes of a peaceful birth with Nathaniel are unfortunately not to be. Lucifer and Evangeline are getting married, and Maddy Black must put in an appearance at the wedding, but Lucifer is known for his machinations, and she’s worried that she and her friends will be vulnerable, especially with so many of Lucifer’s enemies in attendance. And, although he tends to favor Maddy when it benefits him, it’s no secret that he’s after Maddy’s baby, and she may not be safe from him either. There’s also a shapeshifter on the loose that can look like anything or anyone, and it seems to be going after people that Maddy cares about. Keep in mind, Puck is still running around out there, and he’s certainly no fan of Maddy’s, and after what Maddy did to Evangeline, well… It’s sure to be one heck of a wedding.

What could possibly be better than a wedding with Lucifer, all of his minions, and nearly every enemy of Maddy’s? Evangeline is a whole lot of crazy, and it ticks her off to no end that she has to share his attention with anyone else, and that includes Maddy. Maddy, as usual, just wants to be free of Lucifer’s attention and his constant attempts to control her, and her eventually, her child. She’s also still being hounded by Jack Dabrowski, a very determined blogger that seems intent on chronicling her every move for the world to see, and the city is threatening to round up all supernatural creatures into a camp (at the direction of Lucifer’s bro, Alerian.) The book starts off with a bang and pretty much doesn’t stop rolling until the end, and in addition to threats all around, Maddy’s still figuring out her feelings for Nathaniel, who will protect her at all costs. Nathaniel sure has come a long way, yeah? Remember loathsome Nathaniel? Well, he’s no longer loathsome, and he loves Maddy with all of his heart. She cares for him deeply too, but she’s still smarting from Gabriel’s death.

If you think urban fantasy is getting stale, you’d be smart to check out this series, because it’s anything but. Maddy is very, very powerful, but she still has to deal with concerns at home; those of her friends, the impending birth of her baby, and well, paying the bills, as well as not allowing her darkness consume her, and of course, saving the human race. The action is nonstop, but Henry’s fleshing out of not only Maddy, but also supporting characters always keep things in the rather deep end of the pool, when they could easily slide into action for action’s sake. I loved this installment, and especially keep your eye out for a rather humorous sibling brawl toward the end. I love the idea of highly powerful supernatural creatures duking it out like a couple of 13 year olds in a schoolyard, don’t you? Judas, Samiel Beezle, and even JB are on hand to help, along with Nathaniel, of course, and their usual snarky dialogue lightens some pretty heavy situations at times. Henry isn’t afraid to get dark, but it’s Maddy and her stalwart friends that bring light to the darkness and heart to a wonderful series. This is one of the most satisfying (and fun) entries and I can’t help but hope that more is on the horizon for one of my favorite UF heroines, but if not, I can’t think of a better conclusion!