Fantasy November 2014 Must Reads in Science Fiction, Fantasy, and Horror

November 2014 Must Reads in Science Fiction, Fantasy, and Horror 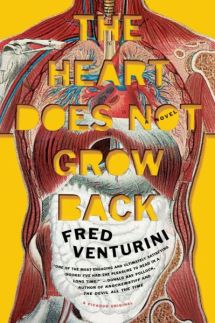 The Heart Does Not Grow Back by Fred Venturini (Picador-Nov. 4th)

Dale Sampson is used to being a nonperson at his small-town Midwestern high school, picking up the scraps of his charismatic lothario of a best friend, Mack. He comforts himself with the certainty that his stellar academic record and brains will bring him the adulation that has evaded him in high school. But when an unthinkable catastrophe tears away the one girl he ever had a chance with, his life takes a bizarre turn as he discovers an inexplicable power: He can regenerate his organs and limbs.

When a chance encounter brings him face to face with a girl from his past, he decides that he must use his gift to save her from a violent husband and dismal future. His quest takes him to the glitz and greed of Hollywood, and into the crosshairs of shadowy forces bent on using and abusing his gift. Can Dale use his power to redeem himself and those he loves, or will the one thing that finally makes him special be his demise? The Heart Does Not Grow Back is a darkly comic, starkly original take on the superhero tale, introducing an exceptional new literary voice in Fred Venturini. 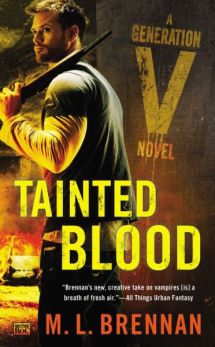 Former film student Fortitude Scott is finally gainfully employed. Unfortunately, said employment happens to be with a group of sociopathic vampires—his family. And as much as Fort is loath to get too deep into the family business, when his brother, Chivalry, is temporarily unable to run the territory, it’s up to Fort to keep things under control.

So when the leader of a powerful faction of shifters turns up murdered, Fort finds himself tracking down a killer while navigating dangerous rivalries, longtime grudges, and hidden agendas. Even with the help of his foxy kitsune sidekick, Suzume, he’ll need to pull out all the stops to hunt for the paranormal assassin.

But as he calls on fairies, witches, and ghouls for help, he discovers that the problem is much bigger than a single dead werebear. The supernatural community is preparing for a massive shift in power within the Scott family leadership—and Fort has landed right in the middle of the gathering storm.

Check out my review of TAINTED BLOOD 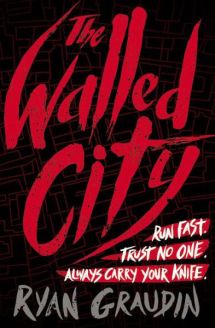 DAI, trying to escape a haunting past, traffics drugs for the most ruthless kingpin in the Walled City. But in order to find the key to his freedom, he needs help from someone with the power to be invisible….

JIN hides under the radar, afraid the wild street gangs will discover her biggest secret: Jin passes as a boy to stay safe. Still, every chance she gets, she searches for her lost sister….

MEI YEE has been trapped in a brothel for the past two years, dreaming of getting out while watching the girls who try fail one by one. She’s about to give up, when one day she sees an unexpected face at her window…..

In this innovative and adrenaline-fueled novel, they all come together in a desperate attempt to escape a lawless labyrinth before the clock runs out. 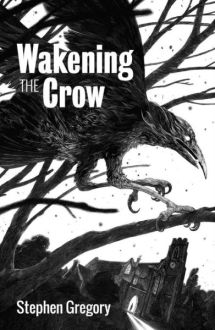 Wakening the Crow by Stephen Gregory (Solaris- Nov. 11th)
Synopsis-With the looming shadow of Edgar Allan Poe falling over one family, Gregory takes the reader into a world of uncertainty and fear.

Oliver Gooch comes across a tooth, in a velvet box, with a handwritten note from 1888 to say it’s a tooth from the boy Edgar Allan Poe. He displays it in his new bookshop, and names the store Poe’s Tooth Books.

Oliver took the money from his small daughter Chloe’s accident insurance and bought a converted church to live in with his altered child and wife. Rosie hopes Chloe will came back to herself but Oliver is secretly relieved to have this new easy-to-manage child, and holds at bay the guilt that the accident was a result of his negligence. On a freezing night he and Chloe come across the crow, a raggedy skeletal wretch of a bird, and it refuses to leave. It infiltrates their lives, it alters Oliver’s relationship with Rosie, it changes Chloe. It’s a dangerous presence in the firelit, shadowy old vestry, in Poe’s Tooth Books.

Inexorably the family, the tooth, the crow, the church and their story will draw to a terrifying climax.

Here’s why WAKENING THE CROW is a Must Read 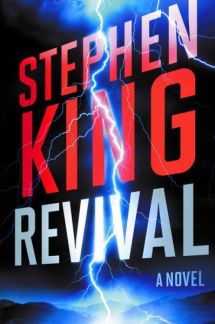 Revival by Stephen King (Scribner-Nov 11th)
Synopsis-A dark and electrifying novel about addiction, fanaticism, and what might exist on the other side of life.

In a small New England town, over half a century ago, a shadow falls over a small boy playing with his toy soldiers. Jamie Morton looks up to see a striking man, the new minister. Charles Jacobs, along with his beautiful wife, will transform the local church. The men and boys are all a bit in love with Mrs. Jacobs; the women and girls feel the same about Reverend Jacobs—including Jamie’s mother and beloved sister, Claire. With Jamie, the Reverend shares a deeper bond based on a secret obsession. When tragedy strikes the Jacobs family, this charismatic preacher curses God, mocks all religious belief, and is banished from the shocked town.

Jamie has demons of his own. Wed to his guitar from the age of thirteen, he plays in bands across the country, living the nomadic lifestyle of bar-band rock and roll while fleeing from his family’s horrific loss. In his mid-thirties—addicted to heroin, stranded, desperate—Jamie meets Charles Jacobs again, with profound consequences for both men. Their bond becomes a pact beyond even the Devil’s devising, and Jamie discovers that revival has many meanings.

This rich and disturbing novel spans five decades on its way to the most terrifying conclusion Stephen King has ever written. It’s a masterpiece from King, in the great American tradition of Frank Norris, Nathaniel Hawthorne, and Edgar Allan Poe. 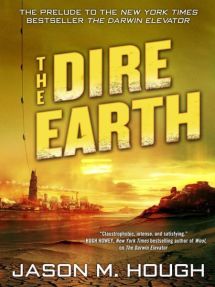 The Dire Earth: A Novella by Jason M Hough (Random House-Nov. 18th)
Synopsis-Jason M. Hough goes back to the beginning with this eBook exclusive novella, the prequel to the New York Times bestseller The Darwin Elevator. An indispensable introduction to a trilogy wrought with action, imagination, and mystery, The Dire Earth is sure to thrill new readers and diehard fans alike.

In the middle of the twenty-third century, an inexplicable disease engulfs the globe, leaving a trail of madness and savagery in its wake. Dutch air force pilot Skyler Luiken discovers he is immune to the disease when he returns from a mission to find the world in chaos, but he soon realizes that he’s not the only one to have endured the apocalypse. Elsewhere, the roguish Skadz, the cunning Nigel, and the tough-as-nails Samantha each make their way toward the last remaining bastion of sanity: Darwin, Australia, home to a mysterious alien artifact that may hold the key to the survival of the human race. 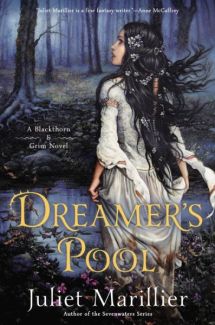 Synopsis-In exchange for help escaping her long and wrongful imprisonment, embittered magical healer Blackthorn has vowed to set aside her bid for vengeance against the man who destroyed all that she once held dear. Followed by a former prison mate, a silent hulk of a man named Grim, she travels north to Dalriada. There she’ll live on the fringe of a mysterious forest, duty bound for seven years to assist anyone who asks for her help.

Oran, crown prince of Dalriada, has waited anxiously for the arrival of his future bride, Lady Flidais. He knows her only from a portrait and sweetly poetic correspondence that have convinced him Flidais is his destined true love. But Oran discovers letters can lie. For although his intended exactly resembles her portrait, her brutality upon arrival proves she is nothing like the sensitive woman of the letters.

With the strategic marriage imminent, Oran sees no way out of his dilemma. Word has spread that Blackthorn possesses a remarkable gift for solving knotty problems, so the prince asks her for help. To save Oran from his treacherous nuptials, Blackthorn and Grim will need all their resources: courage, ingenuity, leaps of deduction, and more than a little magic. 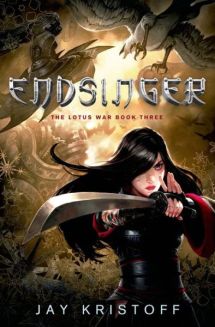 Endsinger by Jay Kristoff (St. Martin’s Press -Nov 25th)
Synopsis-With Stormdancer, Jay Kristoff came roaring onto the fantasy scene—he has been praised as “the master of unique and intense plots and huge twists” (USAToday.com), while critics raved about the novel, calling it “[A] fast-paced, fantastical adventure [that] is sharp as a Shogun’s sword.” (The LA Times). And with healthy sales in hardcover and electronic—fueled by Jay’s inventive, enthusiastic, and relentless promotion on his website, Facebook, Twitter, and the blogosphere—we know readers are hungry for the finale to his wildly inventive Lotus War saga.

As civil war sweeps across the Shima Imperium, the Lotus Guild unleashes their deadliest creation—a mechanical goliath, intended to unite the shattered Empire under a yoke of fear. Yukiko and Buruu are forced to take leadership of the rebellion, gathering new allies and old friends. But the ghosts of Buruu’s past stand between them and the army they need, and Kin’s betrayal has destroyed all trust among their allies. When a new foe joins the war, it will be all the pair can do to muster the strength to fight, let alone win. And as the earth splits asunder, as armies destroy each other for rule over an empire of lifeless ash and the final secret about blood lotus is revealed, the people of Shima will learn one last, horrifying truth. An exciting, vivid conclusion to a critically acclaimed series, Endsinger is sure to have fans racing through the pages to savor every last revelation. 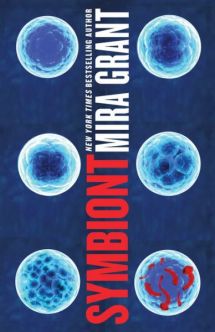 THE ENEMY IS INSIDE US.

The SymboGen designed tapeworms were created to relieve humanity of disease and sickness. But the implants in the majority of the world’s population began attacking their hosts turning them into a ravenous horde.

Now those who do not appear to be afflicted are being gathered for quarantine as panic spreads, but Sal and her companions must discover how the tapeworms are taking over their hosts, what their eventual goal is, and how they can be stopped.