Jon Bassoff, on things that go bump, and his new book, Factory Town

Jon Bassoff’s brand new book, Factory Town, just came out this month from DarkFuse, and he was kind enough to answer a few of my questions about it, and more! 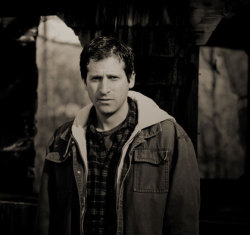 I’m very, very excited about Factory Town! Will you tell us more about it?
Well, it’s unlike anything I’ve ever written before. My writing tends toward the surreal and the grotesque, but I certainly went a bit overboard with this one. At the heart of the novel we’ve got a pretty standard storyline—a girl has gone missing, and this fellow Russell Carver is put in charge of searching for her. But the town in which he is conducting his search is so strange, so nightmarish, that he keeps getting further and further from the truth. And as the novel moves forward we start to understand that the real mystery has less to do with where the girl is, and more to do with who the girl is. The novel’s not an easy one. The plot is nonlinear. Characters appear out of nowhere and take on new personas. There are also multiple story lines that are incongruous to each other. So, yeah, it can be frustrating, but if you work hard enough I think you’ll be able to figure out what the hell is happening…

What do you think makes Factory Town so scary?
The town itself is forbidding with crumbling buildings and vacant lots and abandoned factories. And everybody we meet seems to have their own dark secrets. But the thing that has always terrified me is the loss of sanity, and in this book the entire world is insane. And then you’ve got the narrator who is slowly discovering terrible secrets about his own past, and that can be pretty terrifying as well. 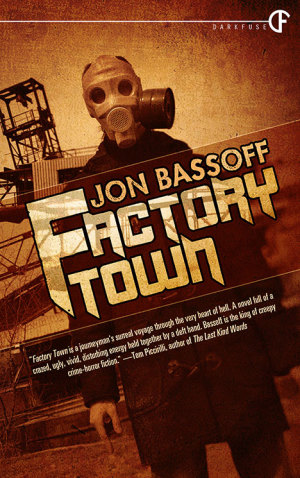 Why do you think readers will root for Russell Carver?
Russell is an interesting character. He spends most of the novel pretty disoriented. He’s a haunted soul, but is uncertain about what haunts him. For me, my concern is less whether the reader will root for Russell, and more if the reader will be invested enough to try and discover who he really is. Because that’s really the ultimate question in this book.

Speaking of scary…what do you enjoy most about writing, and reading, about things that go bump?
It sounds strange, but I think a lot of us have almost a spiritual connection with terror. We spend so much of our lives trapped in the mundane, hobbled by the ordinary. Fear allows an escape from that fate, even if only for a while. Plus, it’s awful hard to come by. Not too many movies, and even fewer books, really scare me. So when it works—man, it’s like a cheap drug. Fewer side effects too.

You have bit of an unusual writing style. Will you elaborate on that a bit?
Well, the thing you’ll notice first is that in this book and my previous book, Corrosion, I don’t use quotation marks. Honestly, I wasn’t trying to be pretentious. My narrators tend to be unreliable, caught between fantasy and reality. So I wanted there to be a blur between dialogue and thought. My writing stays away from being hyper-realistic, but I also never write about the supernatural. So it’s not real easy to classify. I set out to be a crime fiction writer. I guess it’s veered more toward horror, or at least dark, dark fiction. My favorite kind of music is the kind you hear through closed doors on a rainy night, how it sounds kind of blurry and mystic. That’s how I set out to make my stories sound.

What is your writing process like?
Pure misery. I’ve got a full time job and a couple of young kids, so I don’t have much of a routine. I write whenever I can. You steal a few minutes here, a few minutes there. And you’re always thinking about it. Most of my best ideas take place when I’m in the shower. That’s more information then you needed, but it’s true. Every time I need a new idea, I hop in the shower. I’m a very clean person as you can imagine. 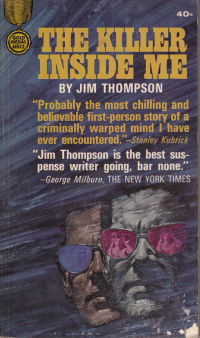 What books have influenced you the most, in your writing, and in life?
The Killer Inside Me by Jim Thompson was the novel that made me want to be a writer. I mean, I’d never read a book where the narrator is a complete psychopath. I dug that one pretty heavy. Loved Wise Blood by Flannery O’Connor. I’ve tried ripping that book off a few times. I love books with unreliable narrators. For me, the narration is always more compelling than the plot. So Fight Club, Fallen Angel, The Unconsoled, Great Gatsby. Oh, and The Butcher Boy by Patrick McCabe. That book is incredible.

If you could experience one book again for the very first time, which one would it be?
The Hardy Boys books. I’m sure if I read them now I would think they were god awful, but I wouldn’t mind being a nine-year old kid and plowing through those again. And I always had a thing for Callie Shaw. See, they would have these little sketches in the book, and Callie was pretty smoking. At least that’s how I remember things.

What’s next for you, this year and beyond?
I just finished a novel called The Incurables, which will be released next year. It features the historical figure of Walter Freeman who was the doctor who pioneered the lobotomy in the United States. He used to ride around in his lobotomobile cutting brains because he thought he was saving the world. It’s also got a guy who’s convinced his son is the Messiah, as well as a psychopathic young woman. It’s just another family friend novel. Now I’m taking a few weeks off from writing but will be getting back on the bus soon. Other than writing? Not much planned. Maybe I’ll go back to school and become a dental assistant. Or study up on the Civil War. Anything’s possible.

About FACTORY TOWN:
Russell Carver, an enigmatic and tortured man in search of a young girl gone missing, has come to Factory Town, a post-industrial wasteland of abandoned buildings, crumbling asphalt, deadly characters, hidden secrets and unspeakable depravity. Wandering deeper and deeper into the dangerous, dream-like and darkly mysterious labyrinths in town, Russell stumbles upon clues that not only lead him closer to the missing girl, but to his own troubled past as well. Because in Factory Town nothing is what it seems, no one is safe, and there’s no such thing as a clean escape.

From Jon Bassoff, author of Corrosion, comes a dark, gritty and surreal novel that is at once a compelling mystery and an exploration into the darkest recesses of the human soul. Welcome to the haunting, frightening and disturbing experience that is Russell Carver’s search for the truth…