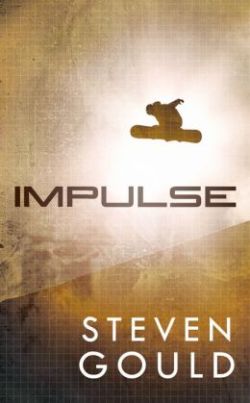 Impulse by Steven Gould (Tor, Jan. 2013)-Note: May be some minor spoilers for Jumper and Reflex, so if you haven’t read them, continue at your own risk.

Impulse continues with the story of jumpers (teleporters) Davy and Millie, but it’s been about 16 years since the last book, and there’s a new addition to the family: Cent (short for Millicent), Davy and Millie’s daughter. They’ve kept her very close to them, and after being home-schooled all her life, Cent yearns to go to high school. Millie and Davy remain, understandably so, terrified of the people that terrorized them in Reflex, and they’re even more terrified of them finding out about Cent. Cent is typical teen in many ways, but she’s very, very smart, and I love how she places intelligence above all things when it comes to boys. That’s just one of the things I love about young Cent, though. I digress. Anyway, they’ve been living in a cabin in the Yukon and while Cent loves her globe hopping (literally) parents, she also longs to be around other kids her age, and recognizes that her social abilities need to be expanded a bit. While Millie and Davy are perfectly happy keeping her at home, Millie especially realizes the importance of Cent being around other teens, and they finally relent to buying a house in the ‘burbs so that Cent can go to high school. Now, of course, for this unique family buying a house doesn’t really have to include actually living there, although they do have to put up appearances. They spend nearly as much time in the cabin as they do in the new house and use a dry erase board to keep up with each other. Davy is more of a worrier than Millie (remember, he had a terrible childhood), but Cent proves herself more than capable of handling herself, especially when she discovers she can jump.

Of course Cent can jump, because she’s Millie and Davy’s kid, and soon, she’s able to show her parents a trick or two. Cent quickly becomes friends with two girls named Tara and Jade and also becomes the target of Caffeine (not her real name), a bully that’s involved with a dangerous gang. Gould could have chosen to make Caffeine totally deplorable, lacking in any sort of morality, and she is pretty horrible, but he resists this, and well, it’s just one of the things that make this book so good, and a big cut above most SF thrillers. Cent spends plenty of time studying at the local coffee shop with her new friends, snowboarding, and discovering boys, but Cent being Cent, she also spends quite a bit of time helping mom and dad with overseas aid missions and infiltrating Caffeine’s gang (because she can, and she can help a few kids in the process.) It all makes for a lot of the clever fun that, if you’re a fan, you already expect from these books. I also love to see a book that focuses on a teen girl that’s supersmart (but not invulnerable from normal teen insecurities), and learns her limits while constantly testing them. I just love these books, period, and I’ll hang out with Millie, Davy, and Cent anytime. Next up: Exo.