Must Reads October 2014 Must Reads in Mystery, Suspense, and Fiction

October 2014 Must Reads in Mystery, Suspense, and Fiction

Here are the  books that I’m especially looking forward to in Mystery, Suspense, and Fiction for October! Enjoy! 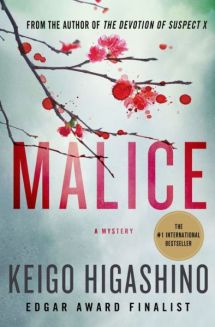 Synopsis –Acclaimed bestselling novelist Kunihiko Hidaka is found brutally murdered in his home on the night before he’s planning to leave Japan and relocate to Vancouver. His body is found in his office, a locked room, within his locked house, by his wife and his best friend, both of whom have rock solid alibis. Or so it seems.

At the crime scene, Police Detective Kyochiro Kaga recognizes Hidaka’s best friend, Osamu Nonoguchi. Years ago when they were both teachers, they were colleagues at the same public school. Kaga went on to join the police force while Nonoguchi eventually left to become a full-time writer, though with not nearly the success of his friend Hidaka.

As Kaga investigates, he eventually uncovers evidence that indicates that the two writers’ relationship was very different that they claimed, that they were anything but best friends. But the question before Kaga isn’t necessarily who, or how, but why. In a brilliantly realized tale of cat and mouse, the detective and the killer battle over the truth of the past and how events that led to the murder really unfolded. And if Kaga isn’t able to uncover and prove why the murder was committed, then the truth may never come out. 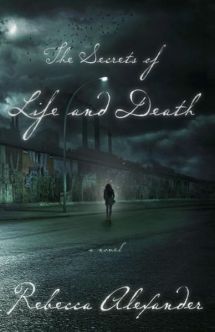 The Secrets of Life and Death by Rebecca Alexander (Broadway Books-Oct. 7th)
Synopsis-In modern day England, Professor Felix Guichard is called in to identify occult symbols found on the corpse of a young girl. His investigation brings him in contact with a mysterious woman, Jackdaw Hammond, who guards a monumental secret–She’s Dead. Or she would be, were it not for magic which has artificially extended her life. But someone else knows her secret. Someone very old and very powerful, who won’t rest until they’ve taken the magic that keeps her alive….

In Krakow in 1585, Dr John Dee, the Elizabethan Alchemist and Occultist, and his assistant Edward Kelley have been summoned by the King of Poland to save the life of his niece, the infamous Countess Elisabeth Bathory. But they soon realize that the only thing worse than the Countess’ malady, is the magic that might be able to save her…

As Jackdaw and Felix race to uncover the truth about the person hunting her, it becomes clear that the answers they seek can only be found in the ancient diary of John Dee’s assistant, Edward Kelley. Together they must solve a mystery centuries in the making, or die trying. 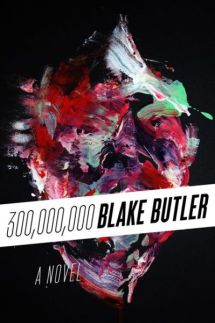 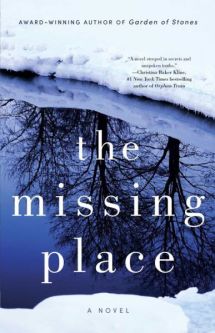 The Missing Place by Sophie Littlefield (Gallery-Oct 14th)
Synopsis-Set against the backdrop of North Dakota’s oil boom, two very different mothers form an uneasy alliance to find their missing sons in this heartrending and suspenseful novel from the Edgar Award–nominated author of Garden of Stones.

The booming North Dakota oil business is spawning “man camps,” shantytowns full of men hired to work on the rigs, in towns without enough housing to accommodate them. In such twilight spaces, it’s easy for a person to vanish. And when two young men in their first year on the job disappear without a trace, only their mothers believe there’s hope of finding them. Despite reassurances that the police are on the case, the two women think the oil company is covering up the disappearances—and maybe something more.

Colleen, used to her decorous life in a wealthy Massachusetts suburb, is determined to find her son. And hard-bitten Shay, from the wrong side of the California tracks, is the only person in town even willing to deal with her—because she’s on the same mission. Overtaxed by worry, exhaustion, and fear, these two unlikely partners question each other’s methods and motivations, but must work together against the town of strangers if they want any chance of finding their lost boys. But what they uncover could destroy them both… 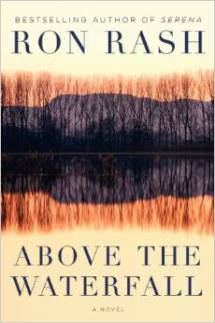 Above the Waterfall by Ron Rash (Ecco-Oct. 15th)
Synopsis-Les, a long-time sheriff nearing retirement, contends with the ravages of poverty and crystal meth on his small Appalachian town. Nestled in a beautiful hollow of the Appalachians, his is a tight-knit community rife with secrets and suspicious of outsiders.

Becky, a park ranger, arrives in this remote patch of North Carolina hoping to ease the anguish of a harrowing past. Searching for tranquility amid the verdant stillness, she finds solace in poetry and the splendor of the land.

A vicious crime will plunge both sheriff and ranger into deep and murky waters, forging an unexpected bond between them. Caught in a vortex of duplicity, lies, and betrayal, they must navigate the dangerous currents of a tragedy that turns neighbor against neighbor—and threatens to sweep them all over the edge.

Echoing the lapsarian beauty of William Faulkner and the spiritual isolation of Carson McCullers, Above the Waterfall demonstrates the prodigious talent of an author hailed as “a gorgeous, brutal writer” (Richard Price); “one of the best American novelists of his day” (Janet Maslin, New York Times). Lyrical and evocative, tragic and indelible, it is a breathtaking achievement from a literary virtuoso. 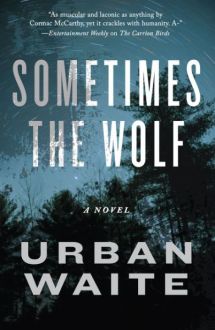 Sometimes the Wolf by Urban Waite (HarperCollins-Oct 21st)
Synopsis-Set in the Pacific Northwest, a spellbinding story of family, violence, and unintended consequences that showcases the searing prose, soulful characters, and vivid sense of place of an acclaimed writer in the tradition of Cormac McCarthy, Dennis Lehane, and Elmore Leonard.

Sheriff Patrick Drake tried to lead an upstanding life and maintain some financial stability until his wife passed away. He did okay for a while, singlehandedly raising his family in a small mountain town. Then he was hit with money troubles, fell in with some unsavory men, and ended up convicted of one of the biggest crimes in local history.

Twelve years later Patrick is on parole under the watchful eye of his son Bobby, who just happens to be a deputy sheriff in his father’s old department. Bobby hasn’t had it easy, either. He’s carried the weight of his father’s guilt, forsaking his own dreams, and put off the knowledge that his own marriage could be stronger and more hopeful. Yet no matter how much distance he’s tried to put between himself, his father, his grandfather, and the past, small town minds can have very long memories.

But trouble isn’t done with the Drakes—and a terrifying threat boils up from Patrick’s old life. And this time, no one will be spared. . . . 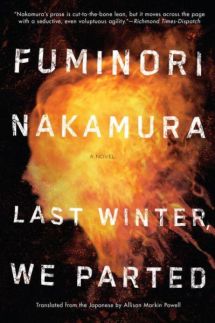 Synopsis-A young writer arrives at a prison to interview a convict. The writer has been commissioned to write a full account of the case, from the bizarre and grisly details of the crime to the nature of the man behind it. The suspect, a world-renowned photographer named Kiharazaka, has a deeply unsettling portfolio—lurking beneath the surface of each photograph is an acutely obsessive fascination with his subject.

He stands accused of murdering two women—both burned alive—and will likely face the death penalty. But something isn’t quite right. As the young writer probes further, his doubts about this man as a killer intensify, and he struggles to maintain his sense of reason and justice. Is Kiharazaka truly guilty, or will he die to protect someone else?

Evoking Truman Capote’s In Cold Blood and Ryūnosuke Akutagawa’s “Hell Screen,” Fuminori Nakamura has crafted a dark and twisting house of mirrors that philosophically explores the violence of aesthetics and the horrors of identity, asking a deceptively sinister question: Is it possible to truly capture the essence of another human being? 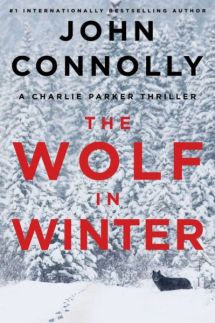 The community of Prosperous, Maine has always thrived when others have suffered. Its inhabitants are wealthy, its children’s future secure. It shuns outsiders. It guards its own. And at the heart of Prosperous lie the ruins of an ancient church, transported stone by stone from England centuries earlier by the founders of the town…

But the death of a homeless man and the disappearance of his daughter draw the haunted, lethal private investigator Charlie Parker to Prosperous. Parker is a dangerous man, driven by compassion, by rage, and by the desire for vengeance. In him the town and its protectors sense a threat graver than any they have faced in their long history, and in the comfortable, sheltered inhabitants of a small Maine town, Parker will encounter his most vicious opponents yet.

Charlie Parker has been marked to die so that Prosperous may survive.

Prosperous, and the secret that it hides beneath its ruins… 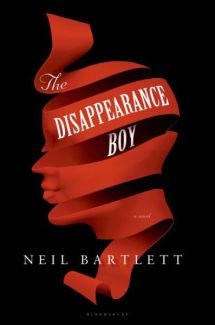 The Disappearance Boy by Neil Bartlett (Bloomsbury-Oct 28th)
Synopsis-Reggie Rainbow got his name at the orphanage. He had polio as a child, and seventeen years of using crutches have given him strong hands and nimble fingers. It is this dexterity, perfect for illusions, which first led Mr. Brookes to hire him for the act. Reggie has been a disappearance boy for years now, making a long string of alluring assistants vanish while Mr. Brookes tricks and misdirects the audience.

But in the spring of 1953, the public no longer seem interested in illusionists. Bookings are slim, even in London. When Mr. Brookes gets a new slot at the down-at-the-heel Brighton Grand, Reggie finds himself in a strange town, one full of dark and unexplored corners. And it is the arrival of Pamela Rose, a beautiful new assistant, that truly turns his life upside down. As the Grand’s spectacular Coronation show nears, Reggie begins to wonder how much of his own life has been an act—and sets out to find somebody who disappeared from his life long ago.

Masterful and heartfelt, The Disappearance Boy is the tale of one young man coming into adulthood amidst the smoke-and-mirrors backstage world; a story of love, tears, and illusion—of all that stays behind the curtain. 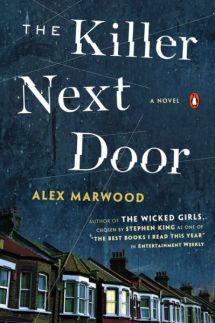 The Killer Next Door by Alex Marwood (Viking-Oct 28th)
Synopsis-Alex Marwood’s debut novel, The Wicked Girls, earned her lavish praise from the likes of Stephen King, Laura Lippman, and Erin Kelly, and won the Edgar Award for Best Paperback Original. Now Marwood’s back with a brilliant, tightly paced thriller that will keep you up at night and make you ask yourself: just how well do you know your neighbors?

Everyone who lives at 23 Beulah Grove has a secret. If they didn’t, they wouldn’t be renting rooms in a dodgy old building for cash—no credit check, no lease. It’s the kind of place you end up when you you’ve run out of other options. The six residents mostly keep to themselves, but one unbearably hot summer night, a terrible accident pushes them into an uneasy alliance. What they don’t know is that one of them is a killer. He’s already chosen his next victim, and he’ll do anything to protect his secret.