Guest Post: Kameron Hurley on worldbuilding and The Mirror Empire

THE MIRROR EMPIRE came out last month, and since worldbuilding is such an important part of this kind of novel, Kameron Hurley was kind enough to break her process down for us and give us a glimpse of what went into creating something as rich and complete as Raisa. Please give her a warm welcome, and be sure to visit Kameron’s website for all of her blog tour stops!

Deconstructing Raisa: How I Built the World of The Mirror Empire
by Kameron Hurley

Those familiar with my fiction – from the blasted, post-apocalyptic, bug-infested cities of God’s War to the toxic, flesh-eating plant jungles of The Mirror Empire – know that I take a great delight in building new and different worlds. I get asked a lot how I do it. The reality is that you build a world once piece, one image, one creature, one mountain, at a time. In the case of the world of The Mirror Empire, called, Raisa, the process of building it actually happened over many years. It’s a geographic sandbox I’ve been playing in since I was twelve, growing and evolving in complexity as I got older.

Here are the major things I considered when putting Raisa together. 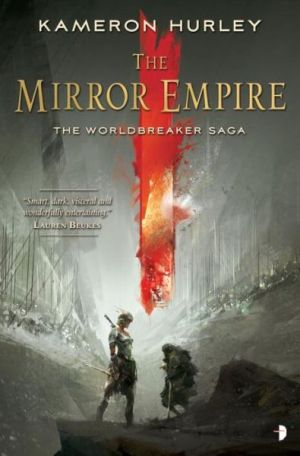 Mountains and rivers and tectonic magical events, oh my! Raisa started out with a small map of a very small country that I now call Tordin. Tordin gets only a passing reference in The Mirror Empire, but we get more face-time there later. I set a bunch of short fiction in Tordin in my teens, which began to become book length work as I got older. As the stories grew, so too did the map – Aaldia, Dorinah and Dhai joined Tordin on the little thumbprint of an island that I decided resided off the coast of a far larger, colder continent.

Once I had the island down where the main events took place, I sketched out the continent of Saiduan, all tundra and windswept ice fields and colorful port cities. Once I had one major continent I wanted to see what the rest looked like. Hrollief, the larger southern continent, gets a shout-out in the book, but it’s likely we won’t see the eastern half of the world and its islands and continents in this series. That’s fine. Always leave room for more.

Geography is important to have down rather quickly. In my God’s War books, the contaminated desert itself is as much a character as my protagonists. Geography can provide literal obstacles for protagonists, from cliffs and rivers to mountains and deserts. But most importantly, environments also have a big impact on cultures. How resource-rich they are will play a part in the types of societies that are built in those areas. While most fantasy writers start with geography, it’s fascinating to me how few spend as much time on creating the cultures that inhabit that geography. But we’ll get there.

Raisa is a world in flux, a place where many invasions from many worlds and many massive magical events have shaped the continents themselves. The world has been broken to pieces many times; Grania, the island where most of the action in the series takes place, has borne the brunt of this breaking and unmaking, and that’s reflected in its strange cross section of mountains, rivers that go nowhere, and other oddities.

Choosing the right flora and fauna can make or break my belief in a world. In my God’s War books I put together a world where the primary animals were insects. There were no birds or mammals aside from parrots, cats, ravens, and dogs. There was a reason for this going back to the origin story of the world, which I never got into. But those were the only animals around, and it made for a very…distinct type of world.

My first pass through Raisa, there were far more bugs, with locusts delivering messages and spiders playing greater roles. But I knew that readers of my prior work would spot the similarities. So I worked hard to come up with plants and animals that were memorable for this world – and this world only.

Flesh-eating and semi-sentient plants became to this world what bugs were to the world in the God’s War books. Raisa, in particular outside the tundra, was obsessed with different types of plants life, nearly all of which was deadly to humans until it was killed, cooked and eaten.

For variety, I also chose to have two types of regular mounts – dogs and bears – instead of choosing one. I’d seen too many books that chose one as a stand-in for horses without considering that there may be many options. I also decided that I’d use the real-world names for many creatures or plants that weren’t… well… quite like the ones we may associate with those terms. That helped me avoid the “calling rabbits smeeps” problem, only in reverse. Instead of filling a world with actual smeeps and smorders I simply called them rabbits and bears. It made it easier on the reader.

The most vital, and most often overlooked, part of building a fantastic world is creating the people within them. Characters should not leap from present-day New York city into some village based on a faux medieval Wikipedia version of a fake Europe that never was. Unless it’s a parody or something.

I nerd out over creating new and different societies. It’s my thing. I don’t fault writers for writing not writing them imaginatively (much), but I admit I do find it interesting that so many readers seem to put up with them. When I read fantasy and science fiction, I read it to explore ideas, to see things I haven’t seen before, and that doesn’t just mean eight hundred pages about a cool new raygun. I want to see different ways people can organize themselves and work out problems. I want to see what commonalities all humans have. When you strip away the artifices of our cultures, when you put us somewhere else, how much do we recognize the core humanity of those people?

Raisa, especially the island of Grania, was possessed of unique geography that allowed its four distinct cultures to remain that way for a very long time. The cross-section of mountains provided a natural barrier that helped them resist invasion and maintain their unique societies. Though there were still short-term invasions, most cultures retained diverse ways of organizing themselves and creating families.

So we have the consent-based culture, the Dhai, who are vegetarian cannibals and former slaves of the Dorinah, who organize themselves into loose clans brought together under a religious leader and have polyamorous families. The Dorinah are a brutal matriarchy, slave owning, with a strict hierarchical system that reports up to an ageless Empress and households run by women who share husbands. Then there are the Aaldians and Tordins, but more on them later. The Saiduan have conquered an entire continent to the north, and customs vary by region, but in general they are a more patriarchal culture with three genders, organized under a changing Emperor chosen by families who battle it out for control of the continent every few decades.

How the societies that characters come from are organized will also influence their morality (the Dhai are religious cannibals, the Dorinah consider slave owning a natural economic necessity), and create tensions between characters from different places. Creating new cultures is often the most fun part of worldbuilding for me, and I wish more people spent as much time creating their fantasy cultures as their maps.

Unique magic systems are the bedrock of any fantasy universe. You want something that 1) you think is really cool 2) isn’t too much like somebody else’s system 3) makes sense with the story you want to tell. Roughly in that order.

The magic system on Raisa changed several times. I was always obsessed with the sky over Raisa – I have old maps with the phases of its (then) two moons on one of the original maps I drew of the world as a teenager. But I relied for a long time on this idea that they were basically Jedi, or One Source weavers like in some Robert Jordan novel. I needed something more interesting, something readers hadn’t seen before, something I hadn’t seen before.

So instead I built a magic system around the sky itself, and the heavenly bodies that rise and fall around it. In fact, the star/satellites became the main driving force behind the overall plot as well, as the powers that each new satellite gives inhabitants play a huge role in who’s in power and who’s not. The invasion that creates the inciting incident in the book herald’s the rise of the darkest star, Oma, which has not been seen in the sky for 2,000 years. And we all know what happens when big bad omens come around again…

Whether your magic system has strict rules or is more supernatural in nature, the key is for it to be as unique as only you can make it.

About Kameron Hurley
Kameron Hurley is the author of the new epic fantasy The Mirror Empire, as well as the award-winning God’s War Trilogy, comprising the books God’s War, Infidel, and Rapture. She has won the Hugo Award, Kitschy Award, and Sydney J. Bounds Award for Best Newcomer. Hurley has also been a finalist for the Arthur C. Clarke Award, Nebula Award, the Locus Award, BFS Award, and the BSFA Award for Best Novel. Her short fiction has appeared in Lightspeed Magazine, Year’s Best SF, EscapePod, The Lowest Heaven, and the upcoming Mammoth Book of SF Stories by Women.