Interview: Susan Klaus, author of Flight of the Golden Harpy

Please welcome Susan Klaus to the blog! Her new book, FLIGHT OF THE GOLDEN HARPY, just came out in June, and she kindly stopped by to answer a few questions about it! 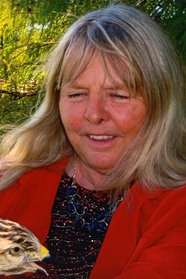 Will you tell us more about Flight of the Golden Harpy and what inspired you to write it?
Flight of the Golden Harpy takes place on a futuristic jungle planet that hosts a winged species called harpies. The human colonists believe harpies are dangerous feral animals, rumored to steal and molest women. Despite their slender humanoid frames, harpies are hunted like wild game and their mounted wings are considered prized trophies.

The story begins with Kari, a ten-year-old girl fighting for her life when an eel-like creature snatches her off a lake bank. A teenage golden harpy flies in and saves her. Ten years later and now a young woman, Kari returns from Earth schools to her home planet, hoping her handsome savior, the rare blond, yellow-winged male, has outwitted the hunters over the years and is still alive. Kari dismisses the rumors that harpies are treacherous monsters and is determined to help them. But all the while, she questions her commitment to the harpies and why she is enchanted and drawn to the golden male. Kari, in part, is a main character, but the true protagonist is Shail, the golden harpy monarch who faces a life-and-death battle to save his flock from mankind.

Award-winning author, Barbara D’Amato probably best describes my novel in her blurb, “Flight of the Golden Harpy is a saga of racial hostility between human and the near-human harpies, of environmental destruction versus preservation, and daughter-father misunderstandings. But most of all, it’s a story of star-crossed lovers, a human woman and her beloved harpy.”

What inspired me to write it? People laugh when I say Brad Pitt. Nearly a decade ago, I was an extra on the movie set of Oceans Eleven and in a scene with him. I used Pitt’s tall, lean frame and pretty boy face to create the golden harpy’s looks. But the story inspiration came when Brad walked on the set and was mobbed by the other extras who wanted his autograph and picture. I felt sorry for him and thought, wow, the poor guy can’t even find peace on a closed set. No matter where he goes, he’s hunted like wild game. That night I had one of those great flying dreams with Pitt and I being chased. The next morning I started writing the novel, but with a slant. Instead of a human hero killing a villainous animal or alien, I wrote it from an animal’s point of view of humans who destroy the forest and gun down the wildlife. 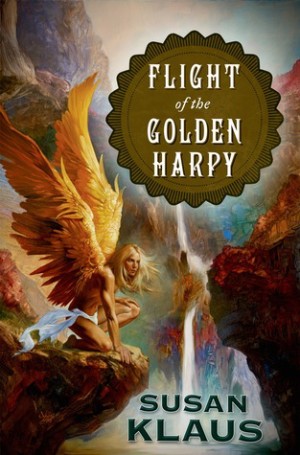 Have you always wanted to be a writer? Will you tell us a bit about yourself and your background?
I never wanted or planned to be a writer. In fact I was a lousy student in school. Even now with several traditionally published books and awards, I consider myself more storyteller than a writer. And that leads to your second question concerning my background. I was born in Florida and have lived here all my life. I’ve always been obsessed with animals, proof in my career choices. I’ve been a pet groomer, pet shop owner, worked for vets and dog kennels, raising show cats, and lastly bred and raced Thoroughbred horses. Currently I’m raising rodeo bulls. As a native Floridian, I’m also a fisherman, scuba diver, sailor, and did a lot camping and hiking in the wild. I’ve seen a good portion of this country on the back of a chopper and have hung out with some unsavory people, several becoming characters in my novels. I’ve had some hairy experiences like facing down hammerhead sharks, riding out stormy seas on boats, and waded all night waste deep through snake and alligator infested swamps, just to name a few.

But my point is experience and adventures can be more conducive to creating a good original story than a writing course. Plus there’s not much research. I just have to remember.

What’s one of the first things you can remember about writing?
Like a lot of kids, I kept a diary. Not good when your mother finds it and learns I’ve been smoking pot. In my twenties, I wrote my first novel about mermaids. That manuscript is in a box somewhere. I didn’t write another word until my fifties and was raising horses. Once I’ve feed and clean stalls in the morning, I had time on my hands to write.

What kind of research did you do for Flight of the Golden Harpy?
None. I already had the knowledge of animal behavior. The harpies hiss and curl up sleeping like cats and arch their wings and challenge one another like elegant snowy egrets or zero in and attack from the air like a tenacious mockingbird. I used Florida for the jungle setting. Everything else was dreamed up.

Why fantasy? What do you enjoy most about reading, and writing it, in the genre?
Flight of the Golden Harpy is a fantasy, but it’s also been called science fiction, so much so it won the Royal Palm Literary Award for Best Science Fiction. But why fantasy? The hook probably started when I was kid watching Star Trek and heard William Shatner’s narrative, “Where no man has gone before.”

That’s the draw for me, creating or reading about new worlds, creatures, and situations. I love the exploration and surprise. Writing fantasy requires a vivid imagination more so than doing research.

Unlike a lot of authors, I hate research, not that I don’t do it because I also write thrillers. After I’m done with a thriller, I have to go back and check for accuracy on weapons, clothing, towns, and so on. What a pain.

What are your favorite authors and books?
My first love was Piers Anthony and his wonderful Xanth series especially since Florida was the setting. I also love Frank Herbert’s Dune. Two movies have been made from the book, both terrible. I wish they’d hire Peter Jackson, the Lord of the Rings director for a remake. Speaking of Jackson, gotta love Tolkien’s novels. And lately I’ve become obsessed with Martin and his Game of Thrones. But if he kills off Jon Snow like he did with my other favorite characters, I done with him. That’s a warning, George. 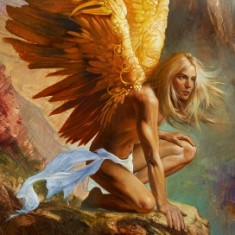 If you could experience one book again for the first time, which one would it be?
Wow, that’s a loaded question, so many. If I had to base it on a book that made me cheer and made me cry, that horrified and delighted with tons of twists, and mounting edge-of-the-seat tension, and had an unforgettable protagonist that swept me away so when I closed the book, I was totally in love with him, I’d have to say Flight of the Golden Harpy. I’d love to experience reading it again for the first time. I apologize if that sounds conceited or self-serving, but it’s the honest to God truth. I’m glad Tor Books published it and it is gaining die-hard fans, but really, I wrote this story for myself.

What’s next for you?
Currently I’m busy with promotion. In the last ten months, I’ve had three books come out, a thriller, Secretariat Reborn was released last Oct., Flight of the Golden Harpy came out in June, and another thriller, Shark Fin Soup just came out Aug. 19. When I finally get back to writing, I plan to work on the second Harpy novel. It’s a trilogy and the manuscripts are already written but need work. I’m also playing with ideas for my next thriller in the Christian Roberts series.

About FLIGHT OF THE GOLDEN HARPY:
Kari, a young woman, returns to the jungle planet of Dora after ten years in Earth’s schools determined to unravel the mysteries surrounding the harpies, a feral species with the appearance half-bird, half-human.

The human colonists believe harpies are dangerous animals, which are known to steal women. The creatures are hunted like wild game, their wings considered rare trophies. But Kari distrusts these rumors. When she was attacked by a monster in the jungle as a child, a male harpy with rare golden coloring rescued her.

Constant hunting by men has driven the harpies to the brink of extinction. Is Kari’s savior, the elegant golden harpy, is still alive? If so, how long can he and his flock survive the ravages of mankind?

Susan Klaus’s Flight of the Golden Harpy is an imaginative and romantic fantasy novel that questions what it means to be human.