Please welcome Bishop O’Connell to the blog! His new book STOLEN: AN AMERICAN FAERIE TALE, just came out last month, and he stopped by to answer a few of my questions! 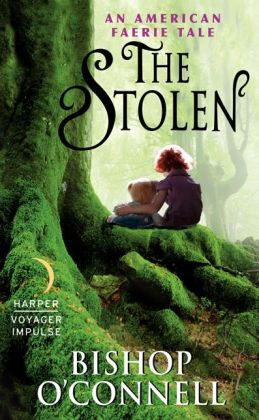 Congrats on the new book! Will you tell us more about STOLEN: An American Faerie Tale, and what inspired you to write it?
Thanks! The original idea behind it was to create a modern faerie tale, to take what faerie tales used to be and bring it into the present, to create an urban faerie tale, if you will. In the end though, it became a book about heroes. Not the flashy kind that can walk through five feet of mud in a white suit and step out spotless, metaphorically speaking. These heroes are real people. They have baggage and make mistakes, sometimes horrific ones. They’re good people, not saints, but not demons either. And in the end, they accept their mistakes and just keep trying, carrying the burden of their choices for their entire lives.

Have you always wanted to write? Will you tell us more about yourself and your background?
I’ve always enjoyed telling stories. I recall very clearly writing a short story in first grade, Mrs. Bugg’s class (yes, that was her real name). I don’t remember what the story was, I’m sure it was a blatant retelling of a tale that was popular at the time. Mrs. Bugg read it to the class, and for a little while I became a minor celebrity. I dabbled in poetry and short stories in school, but it wasn’t until I was in college that I started taking my writing seriously. Poetry readings at coffee houses were big at that time, and I again gained some minor fame. All my poems were stories, and I loved telling them. It wasn’t long before the stories were too big for poems. So I spent less time writing poems and more time on short stories. That was also when I started my first novel that was never finished; an important step in any writer’s life. Adulthood, as it does, got in the way, and it wasn’t until years later I decided to finish a novel.

What kind of research did you do for Stolen?
I wanted The Stolen to be a modern faerie tale, and I’m very proud of my Irish heritage, so that was where I focused. I reread some of the old Irish legends, but I’d been interested in them for so long that I was able to remember a lot of what I needed. Most of my research revolved around the Irish language, history, and technical things. Two of my characters are in the medical field, so I wanted at least to understand some basics of what they would know.

What is your writing process like? Is there anything that you need to get in the writing mood?
Music. I must have music to write. I don’t usually know what I’m listening to after just a few minutes, but it helps to guide my emotions and put me in the scene. I see my book in my head like a movie and the music is like a soundtrack. When I’m writing, I’m really just transcribing what I’m seeing. I also have a day job, which makes finding time to write difficult. I’m not one of those people who can sit and write for twenty minutes. I need hours to make any progress. Sometimes it takes me a while to get rolling, and once I do I don’t want to stop.

Why do you think readers are fascinated with the world of faeries? What fascinates you about faeries?
I think there is something familiar in faerie tales. Most cultures have them in some form or another, and now many of the old ones have been changed and made into children’s stories. Faeries themselves are nearly human, but different enough to fascinate. For many cultures, faerie tales were stories to warn, or teach important lessons. I think there is something, perhaps culturally instinctual, about those stories. They resonate with something in our past, in our heritage. I love that faeries hide from humans, often in plain sight. Like humans, some are good, some bad, some just mischievous. Most other fantasy creatures are rather one-dimensional. Faeries have complexity, dimension, and that makes them feel more real. You can almost believe.

What authors or books have inspired you the most in your writing, and in life?
Well, no surprise at some of the names on my list: Tolkien, Piers Anthony, Hickman & Weiss, Terry Brooks. I also really enjoy Jim Butcher’s Dresden Files series, as well as John Scalzi’s humor and writing style. Harry Turtledove is an excellent inspiration for how he can take our world and make it so different with just a few subtle changes. As for inspiring me in my life, Zen and the Art of Motorcycle Maintenance by Robert Pirsig is right up there. It is an amazing book that made me think and really see the world differently. I don’t just limit myself to science fiction and fantasy though. I love Jack Kerouac, his novels, not his poetry. I’m a big fan of David McCullough, he does history like few others I know. James Joyce is brilliant, and always worth reading. As a philosophy major, I’ve always enjoyed the dialogues of Plato as well.

What are you currently reading? Is there anything you’re particularly looking forward to this year?
I travel frequently for my job, so I listen to a lot of audiobooks. Right now I’m finishing up Thorn Jack by Katherine Harbour. It’s a great story, and I don’t usually go for YA. Before that I was listening to the rerelease of The Dragonlance Chronicles, which was a fun trip down memory lane. Next up on my reading list is John Scalzi’s Android’s Dream. I am very much looking forward to the release of some other Harper Voyager Impulse authors: Once Upon a Rhyme by Jack Heckel, Ignite the Shadows by Ingrid Seymour, Hero Born by Andy Livingstone, and Superheroes Anonymous by Lexie Dunne.

When you’re not writing, how do you like to spend your free time?
I’m a geek, so I love games. I also love movies, reading, and exploring new places. Lately though, my free time has become a rather precious commodity. Who knew achieving your dream was so much work! Seriously though, I wouldn’t change anything. This has been the most amazing journey!

What’s next for you?
Right now I’m writing The Forgotten, the second book in my American Faerie Tale series. It delves deeper into some of the characters in The Stolen, and introduces some new ones. I would almost call it science fantasy. I’m exploring how science, specifically quantum mechanics, could allow for magic and what defines reality. The third book is cooking in my head, but I have two novels waiting for rewrites. One is the first novel of a side trilogy that connects with the American Faerie Tale books and gives the history of some of the characters. The other I have is a literary fiction piece about dealing with grief. I also have a short story that’s a fantasy western I’d like to expand into a full novel. I have to get some of these stories out, I’m running out of room in my head!

About STOLEN:
Tonight, for the first time in over a century, a mortal child will be kidnapped by faeries.

When her daughter Fiona is snatched from her bed, Caitlin’s entire world crumbles. Once certain that faeries were only a fantasy, Caitlin must now accept that these supernatural creatures do exist—and that they have traded in their ancient swords and horses for modern guns and sports cars. Hopelessly outmatched, she accepts help from a trio of unlikely heroes: Eddy, a psychiatrist and novice wizard; Brendan, an outcast Fian warrior; and Dante, a Magister of the fae’s Rogue Court. Moving from the busy streets of Boston’s suburbs to the shadowy land of Tír na nÓg, Caitlin and her allies will risk everything to save Fiona. But can this disparate quartet conquer their own inner demons and outwit the dark faeries before it’s too late?