Fantasy Ben Peek chats with me about his new fantasy, The Godless

Ben Peek chats with me about his new fantasy, The Godless

Please welcome Ben Peek back to the blog! He kindly stopped by to talk about his brand new fantasy, THE GODLESS, which just came out this week! 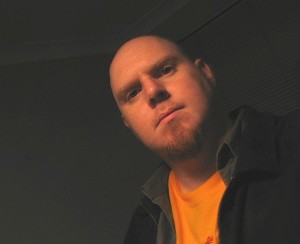 Congratulations on THE GODLESS…tell us more! What inspired you to write this big, bold fantasy novel?
Thank you.

As for the inspiration, I began it after I had just gone through a particularly bad stretch of my career. In the space of a year, I had gone through two agents, lost a deal, and some other stuff, all of which left me with the question of if it was time to give up writing or not. It’s not an amazing story – a lot of authors go through it, sadly, and some hang it up, and some don’t. During the time I spent deciding if I was done, I went back to the books that had gotten me into writing, the things I read while I was a teenager, growing up. A lot of these were fantasy books from the eighties and nineties – Margaret Weis and Tracy Hickman, David Gemmell, Lynn Abbey, Raymond Feist, David and Leigh Eddings, Terry Brooks, R.A. Salvatore and the various TSR books he wrote, and so on and so forth. I can’t say that all of them were good books, but as I looked through all those old paperbacks I had, all these memories came back, and my mind started to turn over the ideas for a fantasy novel. I did not, at first, think I should write it – I mean, a fantasy series is probably not the wisest way to slowly ease back into your career, but the ideas just kept hanging around. I remember being up in Darwin for a friend’s wedding and drifting around in a car daydreaming about immortals fighting. And I had this idea for a world in which the gods lay dead on the ground, and I could see a giant wall that ran the length of one in the mountains, and armies marching to it, and after a while, I thought that since it wasn’t letting go, I’d do it. I’d write this fantasy book and see where I was at the end of it.

I don’t know that I planned to sell it, or that I thought it would sell, but I basically sat down and wrote out of the love I had for those old books and memories, and the end product was THE GODLESS.

Why do you think readers will connect with, and root for, Ayae?
Well, hopefully readers will, because she is the first character people meet, and she has the most growth of all the characters over the three books. She starts the book much like the reader, unaware of the huge history that exists in the world and unaware of how everything connects and unfolds. 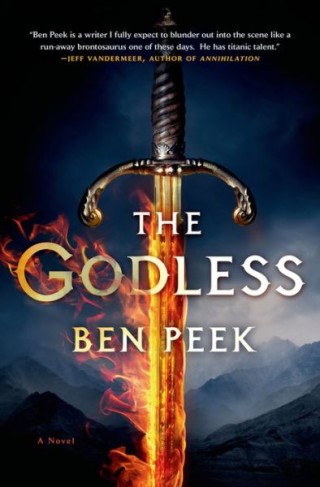 But it’s not necessary for all readers to like Ayae. In fairness, some won’t. You can’t please everyone, and I certainly don’t concern myself over if people will, or won’t, like her. In part, that is why she shares the stage with two other main characters, Bueralan and Zaifyr.

Bueralan is an exiled baron, a man who works now as a saboteur, and is searching for a moral job, after the one he left previously. It is important for him and his soldiers to find a moral core from which they can rebuild their shattered confidence after the death of a close friend. So, in that way, Bueralan is very different from Ayae – he is searching for an inner peace, though of course he will do it through acts of violence.

And then there’s Zaifyr, who is covered in charms, and knows more about the world than the others, and who the two immortals, Fo and Bau, appear to dislike greatly.

What did you enjoy most about writing THE GODLESS, and what kind of research did you do?
Research wise, there were bits and pieces, but most of it necessitated by the story. Like, if I needed to know about siege engines, or swords, or particularly fighting styles. I spent a lot of time reading about various gods from the ancient Greeks and Egyptians, and I read around in the Mahabharata and various other religions for a while, but I wouldn’t actually say I drew very strongly from them in the end. I spent a few days reading about Quantum Entanglement, which forms the base of a lot of the theological underpinnings of the book, and I spent a bit of time reading about experiences of time, and notions of time. There was a bit of racial representation stuff as well, but most of that I just drew on things I had done before, so I’m reluctant to say I did anything new or detailed for the book. In truth, the research was a bit like a magpie, picking here and picking there, so I imagine

I missed lots of places where I could have gone, but the book never demanded I spent months here or there.

As for what I enjoyed most, I kind dug the whole thing, the multiple narratives, the weaving of them, the cannibal armies, the dead gods lying on the ground, the black ocean, the characters, the fight scenes, the jokes, and the talking bird.

Every book needs a possessed bird who talks, I think.

What supporting characters did you particularly enjoy writing? What’s one of your favorites?
Out of the supporting cast, Muriel Wagan and Aned Heast, the Lady of the Spine, and the Captain of the Spine, threatened to hijack the entire series for their own narratives.

You’ve created a whole new “world” with Mireea in THE GODLESS. What are a few of your favorite literary “worlds”?
Perhaps the one I am most impressed by recently is Steven Erikson and Ian Cameron Esslemont’s world that the Malazan series is set in. The sheer breadth of it – I tip my hat, though I am, of course, not wearing one right now.

I thought Tolkien, for all that I didn’t enjoy Lord of the Rings, did a fairly fascinating creation of his world. If the hobbits had all died suddenly and mysteriously, I’d probably list it as my favourite world ever. But they stayed alive, and stayed in the narrative… I love Fritz Leiber’s Lankhmar, and I thought Weis and Hickman’ Death Gate Cycle world was pretty cool. And, of course, Lucius Shepard’s world both around and inside the comatose dragon Griaule is completely and utterly fascinating, and of interest to everyone who likes fantasy. 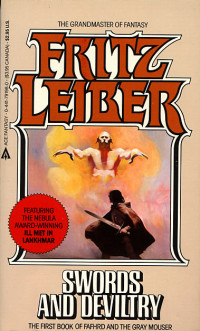 What was one of the biggest challenges for you in writing THE GODLESS?
Not letting it swamp me and overtake my entire life?

I’m not quite sure I have succeeded, however.

You know, I always read the acknowledgments in books and especially loved your thanks to your partner, Nikilyn. How important for an author is the support of family and friends during the writing of a book?
If the world of literature was a fair one, the credits on a novel would be done in percentages. I would take, say, seventy-five percent of the novel’s credit, and Nik would take ten percent, and then Julie Crisp and Pete Wolverton and all the Tor UK people – Louise, Bella, Sam, the maps, the covers, and everyone else I’m missing! – would get that final fifteen percent, all divided up on how Julie and Pete felt it should be (probably with cruel one and half percentage allowances, adhering to the rule that if you keep them half starved they work harder…). But since the world of literature isn’t fair, I get all the credit and all the blame.

However, without Nik, the book would be a different piece, and might not even be complete. She read the book in pieces and in wholes, and she is amazingly well read in areas I am not, so she picks up a lot and challenges moments that don’t make sense, and does it from a point of view that is not my own. It’s the first time I’ve had a partner like that – Nik and I started seeing each other while I was writing THE GODLESS – and it is a part of her that I have a deep admiration for, one that words explain difficultly. It is, I suspect, like that for a lot of couples who are artists, and who are supported by their partners in the different ways that they do so – and it is probably no different than any walk of life, where your partner supports you. There’s nothing worse than a partner who belittles your work, or who thinks you should give it up, y’know?

What’s something you’ve learned since becoming a published author that you wish you knew way-back-when?
Well, I’ve learned to date a better class of woman…

Mostly, I think I’ve just learned that you have to be confident in who you are, what you do, and don’t let yourself get distracted by people and things that don’t truly matter.

What piece of advice would you give to an aspiring author?
Read very, very widely and don’t be afraid.

Have you read any good books lately?
Yeah, I’ve been enjoying Eleanor Catton’s THE LUMINARIES, which I will be done with shortly.

What’s next for you?
Well, I have the third book of the trilogy to write. I am currently working on that now – as for after that, time will tell. I have a lot I’d like to explore in this world I made in THE GODLESS, and if people dig it, I’d like to do that, but we’ll see. I have a Red Sun novel or two I’d like to write. An Orson Welles book. A few short stories – this morning I was thinking of writing a story of William Holden at Ronald Reagan’s wedding – and a couple of other things. There’s always ideas. There’s always time.

Until, of course, there isn’t.

About THE GODLESS:
The Gods are dying. Fifteen thousand years after the end of their war, their bodies can still be found across the world. They kneel in forests, lie beneath mountains, and rest at the bottom of the world’s ocean. For thousands of years, men and women have awoken with strange powers that are derived from their bodies. The city Mireea is built against a huge stone wall that stretches across a vast mountain range, following the massive fallen body of the god, Ger. Ayae, a young cartographer’s apprentice, is attacked and discovers she cannot be harmed by fire. Her new power makes her a target for an army that is marching on Mireea. With the help of Zaifyr, a strange man adorned with charms, she is taught the awful history of ‘cursed’ men and women, coming to grips with her new powers and the enemies they make. Meanwhile, the saboteur Bueralan infiltrates the army that is approaching her home to learn its terrible secret. Split between the three points of view, the narrative of Godless reaches its conclusion during an epic siege, where Ayae, Zaifyr and Bueralan are forced not just into conflict with those invading, but with those inside the city who wish to do them harm.