Ben H. Winters on World of Trouble, writing Hank Palace, and losing it all…and a giveaway

If you’ve followed this blog for a while, it’s no particular secret that I think Ben H. Winters’s The Last Policeman trilogy is one of the best things going out there right now, in any genre. The final book in the series, WORLD OF TROUBLE, came out yesterday, and to celebrate, a few blogs are hosting guest posts and some giveaways, and sobbing in our cups that it’s over (maybe that’s just me, I dunno), but either way, if you haven’t discovered this amazing series, now’s the time, and you can be sure that what Winters has up his sleeve next will be just as great!

Also, to help you discover said series, I’ve got copies of THE LAST POLICEMAN and COUNTDOWN CITY to give away to one lucky winner. It would be the whole trilogy, but Quirk ran out of WORLD OF TROUBLE (see,that’s how awesome and in demand it is), but no matter, you’ll be well prepared to face that asteroid head on with the first two books!

Please welcome Ben back to the blog!

I was pretty resistant to psychoanalyzing Detective Palace while I was writing him. I was worried, selfishly, about sabotaging myself—to think about him too much would mess up my ability to write him. Plus, as ridiculous as it sounds, I guess I was also trying to be respectful to Palace, who would so much hate to be psychoanalyzed.

But people in the books are trying to figure him out all the time (“You’re like an alien, Palace. You know that? You’re like from another planet or something”), so maybe it’s time his author gave it shot. 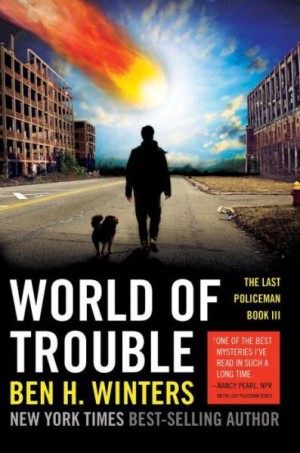 Bottom line, the man is driven by loss. As we find out halfway through the first book, his childhood was marked by a devastating catastrophe. That makes him like a lot of characters: like David Copperfield, like Tom Ripley, like Bruce Wayne. (Naomi Eddes, at the Somerset Diner, actually compares him to Batman, which causes a bell to go off in Palace’s policeman’s heart).

Inevitably, those early setbacks defined him. He couldn’t protect the people who needed protecting, so he spends the rest of his life trying to protect other people—including, crucially, his little sister Nico. I suspect that if she hadn’t been around, if she hadn’t needed him to protect her, he might not have developed the constant anxious responsibility that is a big component of his sense of duty.

(I say all this like he’s a real person, who just presented himself to me. As if he was really created not by a devastating loss, but by me, and by my need for the appropriate hero for this particular story.)

So here’s this guy, he’s got this fire in him, this need to do the right thing—this fire that was kindled by incredible loss—and suddenly what happens to him, when he’s in his 20s? Asteroid! He’s suddenly abut to lose the whole world. Literally the whole world.

(The reason Hank would hate this psychoanalyzing, by the way, is that it takes the asteroid and makes it all about him. As if the asteroid had arrived just to shape his story—which, for me as the author, it did. But for him as a character, as a real person in the context of the story, it’s not like that. It’s not here for any reason. It doesn’t mean anything. It’s just here. It’s just happening.)

The sad thing of course, is that for Hank as for all of us, there’s ultimately no amount of attention to duty that can guard us permanently against bad outcomes. There’s no amount of being a good guy that can prevent bad things from happening.

I don’t know if that’s Detective Palace talking or me, but I think it’s probably true.

Ok, brave end of the world explorers, enter your info in the widget below to win THE LAST POLICEMAN and COUNTDOWN CITY, and I’ll pick a winner on the 24th (US only!!)