It’s no secret that I loved Kieran Shea’s debut KOKO TAKES A HOLIDAY, and he very kindly answered some of my questions about the book, and more!

Also, courtesy of the always lovely folks at Titan, we’ve got 2 copies of the book to give away to 2 lucky winners, so check out the deets at the bottom of the post! 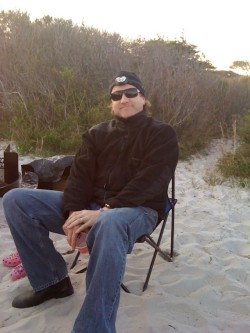 Congrats on the new book!! I loved Koko Takes a Holiday and it’s a helluva debut! What sparked the idea for the book?
Koko originally appeared as a short story for the now-shuttered Plots With Guns crime fiction e-zine. I’ve been fortunate to have a number of people champion my writing over the years, and one of these friends goaded me into blowing the story out into a full-length novel.

What made you decide to set Koko 500 years in the future? Will you tell us more about the book’s vision of our future?
The setting has to do with Plots With Guns. Back in 2009, PWG announced they were going to have a special, one-time “ray-guns” issue, and the challenge was to set a transgressive, noir-tinted tale five hundred years from now. I’d never written anything set in the future and really wanted to give this challenge a shot. The first story I sent off involved water riots, which the editor found too near future and promptly rejected. Frustrated but not easily discouraged, I submitted a second story but this too was passed on because it seemed a little too sci-fi. I know that may sound confusing, but you have to understand that Plots With Guns had a reputation for publishing gritty, unapologetic crime fiction. They didn’t want spaceships or interplanetary shenanigans or anything of that kind. I was determined to make the issue, and so I went back to work. The result was the first incarnation of Koko, and the story was accepted.

As for the book’s vision of our future, people can draw their own conclusions. Some may see it as grindingly bleak, but to consider the future you need to examine the past. There’s no doubt that comparatively we’ve made some great advancements, but we’re still laughably limited and barreling headlong toward our own inane extinction.

Was it a conscious decision to not go into too much detail about what goes on in The Sixty Islands? From your description I pictured Heart of Darkness and Apocalypse Now, with a liberal helping of Cannibal Holocaust, and of course, some fruity drinks with umbrellas on the side. Is that what you were going for? Will you tell us more about what inspired them, and why you thought that would be the way that certain people would want to let off steam in the future?
For fiction to be engaging, I think it’s critical to give readers the freedom to assemble their own vision. Too often when writers go heavy on the spoon-feeding of detail readers tune out. I thought by giving short glimpses of the environment and providing The Sixty Island “commercials” as a more effective way of world building. The Sixty Islands were also inspired by Dubai’s manufactured Palm Islands and then adding some “what if…” gonzo extremes. 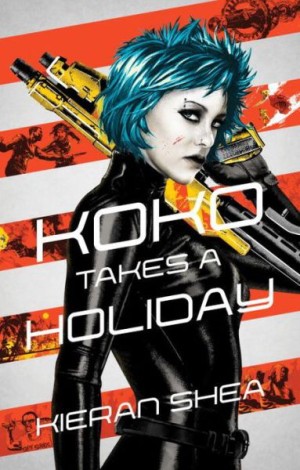 There are a few sly jabs at corporate greed and also extremism in all its forms, not to mention plenty of black humor. Some of the most violent scenes also managed to be funny, and it worked. How the heck did you manage that?
It was wholly intentional to push the extremism on all fronts because I was really going for satire. The violence being funny I blame entirely on too much parochial school, Monty Python re-runs, and Marx Brothers movies.

So….that eye thing. Is that actually a “thing” or just something that’s the product of your wickedly awesome sick imagination?
Historically, the human experience is rife with pointless and brutal rituals. Seppuku, forced circumcision, high school proms…originally the story had characters performing something similar to the Aztec’s Mictlantecuhtli rites, so the “eye thing” ended up being a light touch actually.

Portia Delacompte is a fascinating character and manages to be pitiful and absolutely terrifying at the same time, and all of your bounty hunters are women. So, lots of girl power in this book,even if some of it is, er, quite disturbing. What made you decide to structure it this way? Were all the bounty hunters women from the start?
The truth is it wasn’t deliberate at all. I can’t explain it other than to say it just felt right. Sometimes characters just take off and you need to follow their lead. A character’s sex shouldn’t be an issue, at least not 500 years from now.

Amen to that! I certainly don’t want to spill the ending, but it seems clear to me that you meant to leave it open for more books starring the wonderful Koko. Is that accurate?
Right now the future for Koko is wide open. I just handed in the draft for book two— Koko the Mighty—but this could definitely end up as a trilogy or a longer series.

If you had to cast Koko for the big screen, who would you pick to play your main characters?
Tempting question, but I think casting directors would have a better handle on that. Sometimes it’s shattering for a reader to have an image of a character forced upon them, but I will admit that British actress Lara Pulver would make an exceptional Portia Delacompte. As for Koko, when I was writing the book I kept picturing a young Laura Ballance, co-founder of Merge Records and the bass guitarist from the band Superchunk.

What are a few of your favorite writers or books, and what are you currently reading?
I get a kick out of reading lots of different things…postmodernism, metafiction, plays, comics, crime fiction, social commentary, investigative journalism…any writer who tackles truth with flair and conviction. Some of my favorite fiction writers include Thomas McGuane, Donald Barthelme, Robert Coover, Scott Phillips, Megan Abbott, Tom Stoppard, and Elmore Leonard. Currently I’m reading James W. Hall’s newest Thorn novel Going Dark and flipping through passages of Moby Dick once again because I just finished up Justin Hocking’s surfing memoir The Great Floodgates of the Wonderworld.

Without thinking about it too much, if someone asked you for a book rec, which title would you blurt out (other than your own, of course!)?
I enjoyed the hell out of The Martian by Andy Weir. I’ve a friend who is an engineer at NASA and he said Weir’s attention to detail was spot on.

I have to ask, how did you celebrate when you found out that Koko Takes a Holiday would be published?
I sort of just wandered around the backyard in a fog. I remember being on the phone with my agent and I kept saying something dumb like, “Wow…really?”

When you’re not writing, how do you like to spend your free time?
Avoiding miserable people.

What’s next for you, this year and beyond?
I just handed in the sequel draft to Koko Takes a Holiday, so I suppose there will be revisions on that. I’m also kicking around the idea of either writing a father/daughter post-singularity heist novel or maybe a novella about skyscraper climbers.

1.) You MUST fill out the form below (If you’ve signed into Rafflecopter before, it will remember you!)
2.) Giveaway is for 2 copies of KOKO TAKES A HOLIDAY by Kieran Shea to 2 winners
3.) Giveaway is open to all those with US mailing addresses (no PO boxes)
4.) You must enter on or before 6/20/14
5.) Books courtesy of Titan Books
6.) Please see my Giveaway Policy.