The Raven’s Banquet by Clifford Beal 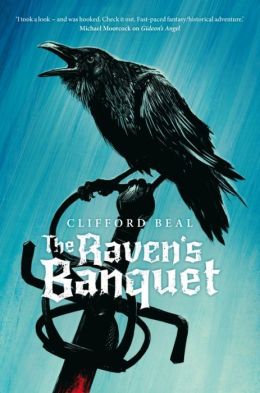 The Raven’s Banquet by Clifford Beal (Solaris, May 12th, 2014) Reviewed by Michael Parker– This dark historical fantasy tells the story of Sir Richard Treadwell in two parts. The first, set in 1625, documents his first year as a soldier. Richard has neither the temperament nor inclination to enter into the proper pursuits expected of somebody from his class, namely business or politics, and has decided as a young man to seek his fortune fighting for a noble cause. He has decided to join the protestant Danish army as an officer to fight in Germany against their papist king, the Hapsburg Emperor.

The second strand of the story is set twenty years later during the English Civil War. Sir Richard is arrested by Oliver Cromwell’s New Model Army and taken to the Tower of London where he will face trial for treason. It is alleged that Sir William has acted for the catholic cause, urging Duke Frederick of Denmark to petition his father King Christian to come to the aid of his relative Charles Stuart, a pretender to the English throne. Sir Richard knows a guilty verdict means the gallows, and death seems likely, even with his brother’s counsel, not least since the charge is true.

The book’s structure, in which, chapters from the two time periods alternate is highly effective in showing Sir Richard’s downfall. He begins as an innocent naif, and as the realities of war strip away his boyish idealism, we see how he ends bitter and humiliated. The young Sir Richard joins a small troop of cavalry men who teach him there is little bounty to be found in war, and that which there is is not given freely but taken by sacking and looting, and by rape and torture. As his campaign progresses, Richard’s soul is increasingly corroded, initially by sins of omission as he is too scared to intervene as his companions torture a local landowner to find his hidden wealth, then later by sins of commission as he murders his retainer then finally as he betrays the woman who saved his life on the battlefield and has grown to love.

There is a satisfying supernatural element which takes the book into fantasy territory. Sir Richard would have visions as young boy which scared him and embarrassed his family. He was encouraged not to talk about them and they seemed to recede during adolescence. As his crimes mount up though, he begins to see his victims brought back to life. The tortured farmer returns as a horrid spider-like creature, his retainer a kind of tree-man, and he sees his comrade, the psychopathic Christopher, pursued by the hounds of hell.

The author is unflinching in showing the horrors of war, and at no point gives his (anti-)hero an easy time. Sir Richard is made to face up to every one of his actions, and when at the end of the book, he is offered a choice – to lie and use the soldier’s defence, that is to say he was just following orders, and maybe escape with his life, or to admit the truth and risk the gallows but perhaps salvage some self-respect – I didn’t know which he would take. To find out, you will have to read the book for yourself. I hope that you will.