Reviews The Lost Fleet: Beyond the Frontier: Steadfast by Jack Campbell

The Lost Fleet: Beyond the Frontier: Steadfast by Jack Campbell 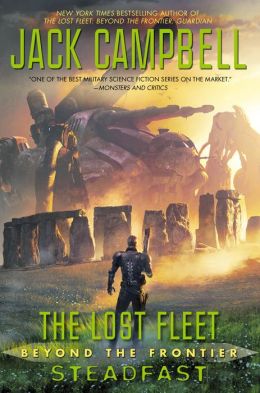 The Lost Fleet: Beyond the Frontier: Steadfast by Jack Campbell (Ace, May 6th, 2014/Reviewed by Peter)-Black Jack Geary and his lovely bride, Captain Tanya Desjani, finally have some time to be away from the ship and to be a married couple, enjoying the sights of old Earth with tours of the Great Wall, Stonehenge and …. wait a minute, some of their sailors have been kidnapped and the couple is hustled off in the middle of the night to prevent their own kidnapping. As they flee Earth (their belated honeymoon cut short), they are dogged by stealth ships trying to corral them. Oh, and those kidnapped sailors? They end up in the worst place in the universe where simply getting too close is a death sentence. How will our intrepid heroes save themselves and their doomed crew members?

Black Jack, though hero of the Alliance, is also the thing the ruling elite fear the most. Black Jack is so popular that the ruling elite know that the populace would happily chuck them onto the trash heap and elevate Jack Geary as the leader of a new Alliance, a job he has no interest in. Needless to say this is not something that sits nicely with those who have lived comfortably while sending generations of their people off to die in a never ending war. The problem is how do you manage to take Black Jack down without causing the very uprising that you are desperately striving to prevent? They have tried time and again to stack the deck so heavily against him with missions that no man could possibly survive. But he always manages to find a solution to the Gordian knots presented to him. Why won’t the man have the decency to die and become a legend again instead of a flesh and blood man whose mere existence threatens them so?