Please welcome Stephanie Saulter to the blog! GEMSIGNS just came out, and she was kind enough to stop by and tell us about it, and more! 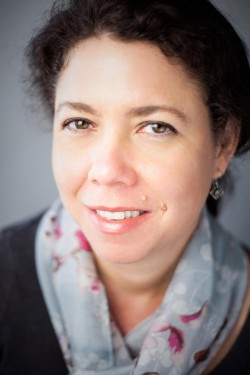 It’s so exciting that Gemsigns is finally out in the states! Will you tell us more about yourself and your background? Have you always wanted to be a writer?
I spent a huge part of my life in the States – they were very formative years for me, so having Gemsigns finally come out there feels in a weird way like bringing it all back home! I’m originally from Jamaica. I went to university in Cambridge, Massachusetts and then spent another 11 years in America – Los Angeles and Miami – before moving to London in 2003. I’ve had one of those careers that’s covered a lot of bases; real estate development, restaurants and hotels, urban regeneration, affordable housing, some public policy work, corporate consulting.

Have I always wanted to be a writer? Probably, though it’s only been in the last ten years or so that I started to think I knew enough to do it well.

Will you tell us more about GEMSIGNS and the Gems, and what inspired you to write the series?
Gemsigns was me writing the kind of story I wanted to read, but that no one else seemed to be writing. I wasn’t finding much science fiction that paid attention to the social sciences, or in which the imagined future was in dialogue with the reality of the present and the past. I’m really interested in how people relate to each other, and how that differs according to race, appearance, class, gender, culture, religion, education – you name it. We humans are incredibly judgemental. I wanted to write a story that let me explore the ways those judgements are made, and the kinds of logic – or illogic – that they’re based on. Creating the gems was a way of setting up a group of people that stand outside of the frameworks we’re already familiar with; but that can stand in for all of them. I also thought that it ought to be possible to write an entertaining science fiction thriller with multiple, twisty plotlines wherein the conflicts arise out of very recognisable concerns – economic and social pressures, corporate power, moral panics, media campaigns, political posturing. And there are a whole load of genre tropes and character archetypes that I am frankly sick to death of; so I wanted to see if I could write stories that didn’t rely on them, but that were just as exciting and engaging for the reader as the ones that do.

Why speculative fiction? What do you enjoy most about writing, and reading in the genre?
There’s a freedom in speculative fiction that I don’t think you find elsewhere in literature. Decoupling the narrative from contemporary reality allows room to explore, to ask difficult questions, to look at things from a completely different perspective. If literary fiction is about examining the world that we live in, speculative fiction is about examining what the world might be like if we lived differently. I love the scope of that, the sense of adventure and enquiry. As a writer, it lets me stretch intellectually as well as creatively; as a reader I’m both entertained and intrigued.

What authors or novels have influenced you the most in your work?
I kind of want to answer “all and none” to this. I think everything you read influences how you write, because it influences who you are. But I deliberately set out to try and write something different; I didn’t want to rehash the work that I admired. What draws me to an author is their originality, along with really high quality prose, sophisticated story structures, depth of characterisation, well constructed and intelligent plots, and a story that tells me something I didn’t already know or makes me think in a new way. Those are the writers whose integrity and mastery of technique I want to emulate. I’ve learned a lot from reading Neil Gaiman, who never, ever loses sight of the importance of the story no matter how much fun he’s having with narrative form and tone along the way; and from Richard Morgan, who manages the trick of writing terribly damaged, violent characters with a huge degree of empathy, but not a speck of sentimentality.

What is your writing process like, and what kind of research did you do for Gemsigns?
I’m less disciplined at the beginning, when I’m still feeling my way into the story, trying to work out details of plot and structure. A lot of the work is done in longhand, in notebooks; mind maps, motivational arcs, lists of questions. Some research happens at that point, just to make sure that whatever ideas I’m playing with aren’t completely implausible, and more gets done along the way as I find there’s stuff I need to know in order to flesh those ideas out. For Gemsigns I had to do some fact-checking around specific areas of biotechnology, sensory abilities in other species, neuromuscular disorders, social media, and the history and geography of London; but because so much of it is rooted in things that I’m interested in anyway, it wasn’t a particularly research-heavy novel. Once I’m actually writing the book my process is much more structured. I work all day, morning to night. I generally spend the first couple of hours working through what I did the day before; that initial edit tidies up the prose, keeps the story on track, and helps me to regain a sense of momentum.

What’s one of the first things you can remember writing?
I know I wrote bits and pieces of bad poetry and stories as a child, but on my life I can’t remember what any of them were about. That’s probably just as well! It’s interesting though, to have this memory of myself writing, but no memory whatsoever of what I was writing. I seem to recall that I won a prize for something I wrote in university, but I can’t remember what that was either. The first thing that I can really recall properly is a piece of work I still have – it’s a screenplay called The Control Group, about a bunch of people who’ve been hired to help test a new product only to discover there’s a lot more to it than they could ever have imagined.

Will you tell us a little more about Scriptopus?
Scriptopus is – was – an online creative writing app I conceived about five years ago. The idea was basically an interactive writing game; you’d click through a variety of short passages of fiction until you found one you liked, and then you’d have 15 minutes and 1000 characters to write the next bit of it. Your bit would be all that the next person saw of that thread, but after 10 entries the thread would close and everyone who’d contributed to it got an email with a link to the completed ‘story’. I thought it would be a fun way of having a daily 15 minute writing exercise, without the pressure of needing to come up with a concept or to see it through. It was really simple – I didn’t have the resources to do anything terribly fancy – but it had some sharing and social media functionality, and worked really well. I don’t think I’d be a writer now if I hadn’t done that first.

There’s a page on my website that tells the story of Scriptopus, including why it’s now down. I’ve got the source code and the original content, and with any luck I will, at some point, be able to relaunch it.

If you could give a bit of advice to an aspiring author, what would it be?
• Do you know what it is you want to say? Because if you don’t, no one else will either.
• Do believe that it’s hard; don’t believe it’s impossible.
• Don’t strive to be the next [insert famous author here]. Tell your own stories. That’s what they did.
• Work at your craft. Critique it. Question your choices. Ask yourself: how best can this story be told? Be clever, be creative, be brave. Don’t be scared to try something you’ve never seen done before.

When you’re not writing, how do you like to spend your free time?
Reading. Also the theatre, museums and galleries, lectures, live music, walks. But mostly reading.

What’s next for you?
I need to finish writing the ®Evolution! As of this moment I am running terribly late with the third book, Gillung – I know what the story is but life has been so manic for me lately I haven’t had time to write it. Binary, the second book, was published in the UK just over a month ago, and now that Gemsigns is out in America my plan is to basically lock myself away and get it done. I’ll still pop out occasionally – I’m at the Calabash Literary Festival in Jamaica at the end of this month, and I’ll be doing stuff at the Nine Worlds Geekfest and the World Science Fiction Convention, both of which are being held in London in August. I’ve got an idea for a project I want to work on once the ®Evolution trilogy is complete, but I can’t let myself get distracted by thinking about it too much yet.

About GEMSIGNS:
For years the human race was under attack from a deadly Syndrome, but when a cure was found – in the form of genetically engineered human beings, Gems—the line between survival and ethics was radically altered. Now the Gems are fighting for their freedom, from the oppression of the companies that created them, and against the Norms who see them as slaves. And a conference at which Dr Eli Walker has been commissioned to present his findings on the Gems is the key to that freedom. But with the Gemtech companies fighting to keep the Gems enslaved, and the horrifying godgangs determined to rid the earth of these ‘unholy’ creations, the Gems are up against forces that may just be too powerful to oppose.