SIXTH GRAVE ON THE EDGE by Darynda Jones is out today, and courtesy of St. Martin’s Press, I’ve got an excerpt of the book! Enjoy!

SIXTH GRAVE ON THE EDGE 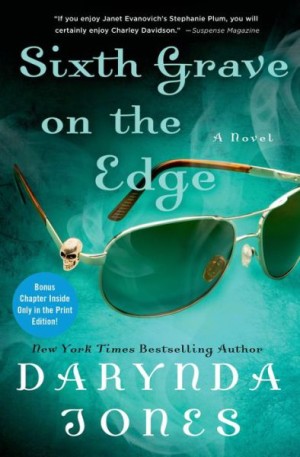 I wound around tables and chairs to get to Cookie. Fortunately, she’d grabbed us a spot before the mad rush hit. Ever since Reyes took over, the place had been jumping. Business was always pretty good, but with a new owner who was also a local celebrity— Reyes made national news when the man he’d gone to jail for killing was discovered alive—and the addition of a brewery in the building adjacent to the bar, patronage had tripled. Now the place was packed with men who wanted the fresh brews and women who wanted the brewer himself. Hussies.

I walked stiffly past the worst hussy of them all: my former BFF, who’d apparently decided to move in. Jessica had been at the restaurant every day for over two weeks. Most days more than once. I knew she was hot for my man, but holy cow.

Clearly, I’d have to say yes to Reyes soon. This was getting ridiculous. He needed a ring on his finger—and fast. Not that that would stop them all, but hopefully it would thin out the horde.

A tatter of giggles erupted from her table as I passed. She was probably telling them the tale of Charley Davidson, the girl who claimed to talk to dead people. If she only knew. Then again, if she were to die soon, I’d totally ignore her. She’d want me to talk to her then.

“You brought me a flower,” Cookie said as I plopped down across from her, collapsing into the seat with a dramatic flair I usually reserved for the evening cocktail hour.

“Sure did.” I handed the daisy over to her.

I nodded. “Yeah. He was at the corner up the street and walked through traffic to hand it to me.”

“How much?” she asked, a knowing smirk on her face.

“You paid five dollars for this? It’s plastic. And filthy.” She shook it to get the layer of dirt off. “He probably stole it off someone’s grave.”

She shook her head in disappointment. “How can they always pick the suckers out of a crowd?”

“Not yet. I was just glad to get a table. That man came back in, Mr. Joyce. He’s still agitated and was not happy you wouldn’t be back to the office until one.”

“Well, he’ll just have to hold his horses. PIs have to eat, too.”

“And I see your bestie is back again.”

I glanced back at Jessica’s table. “I think she should have to pay rent.”

A slow warmth spread over me as I spoke. The heat that forever surrounded Reyes curled around me like smoke. I could feel him near. His interest scorching. His hunger undeniable. But before I could seek him out, another emotion hit me. A cooler one, harder though no less powerful: regret. I turned and watched as my dad made his way to our table.

He pushed it back to the table. “I just came in to finish up the last of the paperwork.” He looked around Calamity’s. “I think I’ll miss this place.”

I was sure he would, but nostalgia was not the emotion I felt emanating from him.

He snapped back to us. “That’s okay. I have a few errands to run before I head out.”

“Dad,” I said, my lungs struggling for air underneath the oppressive sadness and regret pouring out of him, “you don’t have to go.” He was leaving my stepmother for a sailboat. Not that I blamed him. A sailboat would at least be useful. But why now? Why after all these years?

He waved off my reservations. “No, this will be great. I’ve always wanted to learn how to sail.”

“So, you start by planning a trip across the Atlantic?”

He released a hapless sigh. “I don’t know. I’m not getting any younger, and you only live once. Or, maybe twice in my case.”

“I had nothing to do with that.”

“You had everything to do with it,” he countered, and placed a hand over his heart. “I know it. I feel it in here.”

He swore I’d cured him of cancer, but I’d never healed anyone in my life. It wasn’t in my job description. I dealt more with the other side of life. The after side.

“Don’t leave her because of me. Please.” If he was leaving my stepmother for my benefit, because of how she treated me, he was a day late and a dollar short. He should have done it when I was seven, not twenty-seven. I could handle her. I’d learned how the hard way.

Cookie pretended to be studying the menu as Dad shifted uncomfortably.

“I think you are.” When he dropped his gaze to the sugar jar instead of answering, I added, “And if that’s the case, you’re doing it for the wrong reason. I’m a big girl, Dad.”

When he looked back at me, his expression held a desperate passion. “You’re amazing. I should have told you that every day.”

I put my hand over his. “Dad, please sit down. Let’s talk about this.”

He checked his watch. “I have an appointment. I’ll come see you before I leave. We’ll talk then.” When I narrowed my eyes on him, he added, “I promise. Take care, pumpkin.” He bent and kissed my cheek before heading out the back door.

“Mm-hmm.” The doubt in her expression only fueled my need to mock her in public.

“So, what made you think fuchsia pinstripes would look good with yellow?”

“True. But really,” she said, straightening. “Does this look bad?”

She looked fantastic, but I could hardly tell her that.

I’d felt Reyes near me, watching the interaction with my dad. I spotted him when I looked toward the board that listed the daily special. He was wearing an apron and had a towel in his hands, drying them as he pushed off the bar and strolled toward us.

Cookie saw him, too. “Holy mother of all things sexy,” she said, her eyes drinking him in.

“Right there with ya.”

“Will I ever get used to that sight?” she asked me, not daring to take her eyes off him.

“The adorable sight of Reyes Farrow in an apron?”

A giggle escaped me before I said, “Well, you know what they say: Practice makes perfect.”
Excerpted with permission of the publisher

About SIXTH GRAVE ON THE EDGE:
Sometimes I wrestle my demons. Sometimes we just snuggle.
—Bumper Sticker

Most girls might think twice before getting engaged to someone like Reyes Farrow—but Charley Davidson is not most girls. She’s a paranormal private eye and grim reaper-in-training who’s known to be a bit of a hell-raiser, especially after a few shots of caffeine. Her beloved Reyes may be the only begotten son of evil, but he’s dark and sultry and deeply sexy and everything Charley could hope for. Really. But when the FBI file on Reyes’ childhood happens to land into her lap, she can’t help herself: She opens it…and then the real fun begins. First, Charley finds a naked corpse riding shotgun in her car. Then, a man loses his soul in a card game. Throw in a Deaf boy who sees dead people, a woman running from mobsters, and a very suspicious Reyes, and things can’t get any worse for Charley. Unless, of course, the Twelve Beasts of Hell are unleashed…