Horror A chat with Karen Heuler, author of Glorious Plague

A chat with Karen Heuler, author of Glorious Plague

Please welcome Karen Heuler back to the blog! Her new book, GLORIOUS PLAGUE, just came out and she answered a few of my questions about it, and more! 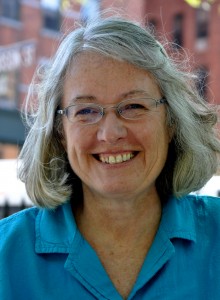 I love the premise of GLORIOUS PLAGUE! Will you tell us about the book, the world you’ve created, and what inspired you to write it?
An insect virus which causes insects to rise to the top of the stalk, crosses over to humans, and people are struck by an irresistible urge to climb high and sing. I think the idea of heights pulled in the singing—it was terrible but at the same time absolutely riveting to think of an apocalypse that wasn’t screaming oozing zombie-ish, but was beautiful. A beautiful apocalypse.

Of course it’s also deadly. There’s no recovery. People are seized by exaltation and search for their song and when they find it, they climb and sing until they die. I take the George Washington Bridge from New York to New Jersey a fair amount, and I can never take it now without imagining people up on the struts singing, or arranged along the niches in the Palisades cliffs, singing.

After the plague passes through the population, the survivors have to deal with what’s left in terms of goods and society. People try to get organized, and when angels and gods start walking the earth, they’re barely noticed.

Why do you think readers will connect with Dale?
Dale works for a sort of state agency checking on any molds or funguses affecting farmers in NJ. Her daughter, Hallie, works as a realtor in New York. As Hallie is struck, Dale loses touch with her daughter and makes her way through the rising surge of the virus, with trucks and cars abandoned on the highways as people feel the call. The bridges and tunnels are littered with abandoned vehicles, and she does the last leg on foot, entering Manhattan as the notes rise in the air.

She can’t find Hallie, and New York is crashing to a halt. Within days, the singers on all the heights are dead and dying, and she tries her best to work with the new order, checking apartments for abandoned pets and children, and even going on the rooftops with the sanitation forces. She notes that some people are seeing angels. 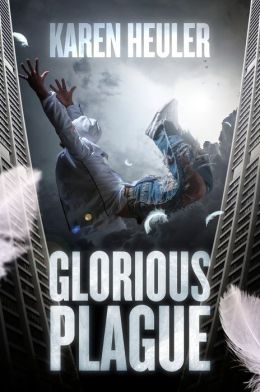 I don’t think anyone gets through life without losing someone in some fashion, so looking for someone you love will connect on a few levels. But even as she searches, the world is changing, heralded by the angels. This is a new existence, and at first she isn’t part of it. But after gods start to walk Manhattan’s streets, gradually Dale starts seeing it from the inside. The plague affected those who survived. It changed reality for them.

And there’s Omar, who comes after Dale because he needs to do something. He doesn’t see what others see, and since he’s an entomologist, he feels he should try to find the cure. There’s always someone who finds the cure; he’s read the novels, he’s seen the film. He doesn’t see what everyone else sees. But is what he’s seeing the truth?

What did you particularly enjoy about writing Glorious Plague and what do you think really sets it apart from your other work?
The visuals never left me on this one. Plus, there’s a lot of literary reference in it. It exists on a few levels, the literary and the speculative, and there’s a small war going on between them as well. Some critics think it’s brilliant, but… And the “but” concerns the ending. It’s not a standard ending. It doesn’t explain everything. There are things in the book that definitely go against everything you’ve been told in your writing class (and even in the writing classes I teach). But there are two strands here—Dale and Omar—and they see different things. The ending reflects that.

What research did you do for the book?
I wish I could remember how this all started. I must have read some reference to insects being manipulated by the virus to climb to the tops of stalks, which is advantageous to the virus and allows it to be more easily distributed. I read up on that of course, and just took away what I could understand. Insect viruses don’t cross species barriers (“Until they do, of course, in which case everyone will say I always knew it,” as Omar would say, nodding).

What is your writing process like? Chaos, controlled chaos? 😉
I’m a slow sort of spaced-out writer. I think a lot about what I’m writing before I write, and since I’m also a spaced-out thinker, that can take awhile.

What would you like readers to take away from Glorious Plague?
If there were one song that would pull you up to the heights, what would you choose? Mine changes, though the one I think it might be right now is in the book. Songs create profound responses, and I sift through the music I love to find the one, the truest, the most emblematic song. It’s an interesting thing to do.

I also want people to think about what gets replaced, and what they also carry with them in terms of their gods and their myths. What walks the city with us are all the tales we somehow believe are true. Yet if we met them in person, how would we react? Could you tolerate having the immaterial become solid?

There’s been some controversy about the ending, so the other thing I’d like people to take away is to consider that the character who seems to be most in touch with reality might instead be following a reality of his own.

Have you read any good books lately?
I read Jeff VanderMeer’s Annhilation and loved it. The mood, the flow, the tension were all perfect for me. And I share that sense of place, where the unreal is as real as anything else. I also just finished Ancillary Justice by Anne Leckie, which was terrific. A great new writer and a great imagined world.

What’s next for you?
I’ve got tons of uncollected stories, two almost-finished books, and some ideas for more stories. I am really going to try to get organized. Someday. Soon. Or maybe I’ll just think about it some more. Most writers have a theme they return to over and over again (and it can make for the most passionate work) but I’d love to break away from my own themes and try something a little different. What? I don’t know. Yet.

About GLORIOUS PLAGUE:
Hallie is missing—and so are thousands of others. Everywhere people are singing—climbing to the rooftops, to the bridges, to lamp post and road sign, steeple and water tower, singing gloriously, triumphantly, tirelessly—and dying.

Hallie’s mother, Dale, goes to Manhattan to search for her. She drives in from rural New Jersey, passing abandoned cars and trucks, to make her way to the jammed George Washington Bridge, rejoicing with hymns and gospel and rock and opera.

The plague moves swiftly, and the city’s survivors form new communities, dealing with the rotting corpses, trying to re-establish a new infrastructure for the new order.

And odd things happen—angels come to earth, Christ drags his crucifix around Rockefeller Center, the Indian god Ganesh runs for mayor—but it doesn’t seem remarkable to the survivors. A man falls in love with a mermaid and decides to throw in his fortunes with hers, only to be attacked by an animal liberated from the zoo. Politics begins to assert itself, as does real estate issues, and it matters what—and who—you believe. It’s time to choose sides.