The 2014 Edgar Award winners have been announced, but I’ve got one more nominee spotlight for you to close out this series (until next year, at least.) Please welcome Caroline Lawrence to the blog! She stopped by to talk about PK Pinkerton, and much more! 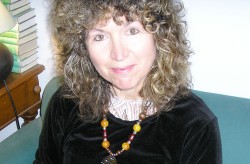 Congrats on your Edgar Award nomination! Will you tell us a bit about PK Pinkerton and the Petrified Man?
After writing 17 Roman Mysteries – I call them “Famous Five in Ancient Rome” – I thought it would be fun to write a history-mystery book for kids set in another exciting period and place. I don’t know as much about my own American heritage as I should and I love Western movies, so I thought of “Nancy Drew in Deadwood”… with a twist!

You were a teacher for 10 years in London, but have you always wanted to be a writer? What made you take the plunge into writing fiction?
Teaching was huge fun but emotionally and physically exhausting. As I got older, I wanted something a bit less stressful but just as fun and mentally stimulating. I thought writing might fit the bill but that if I wanted to be a writer I should probably make a start. Without quitting my day job, I started reading lots of books and writing for an hour a day. Finally I cracked it when I came across a story structure course by Hollywood script doctor John Truby. I needed to learn to write strong plots on which to hang all my ideas! You can see a short list of my favorite book on writing and also my best writing tips here.  They include my summary of John Truby’s story structure principles.

The PK Pinkerton series is set in Virginia City, Nevada, in 1862. What kind of research have you done for the series, and what is one of the most fascinating things you’ve learned?
I have loved researching the P.K. Pinkerton books. I’ve done lots of travelling, reading and “playing” with artifacts at re-enactment events and gun clubs. My best discovery was the wonderful corpus of sagebrush writers from the second half of the 19th century: Mark Twain, Alf Doten, A.J. Marsh, Dan De Quille and especially Bret Harte, whose work I adore. The most fascinating thing I learned was how prevalent tobacco would have been in the 1860s, with spittoons on every corner. 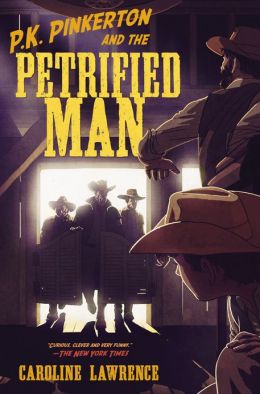 What made you decide on this time period for a book series? You’d already tackled ancient Rome in your Rome Mystery series, but why the Wild West?
I knew I wanted to write a kids’ detective book with a Western setting, so it was only a matter of finding a place. In 2008 I flew to California, hired a car and went on a road trip with my sister Jennifer, who is an excellent driver. When we pulled into Virginia City, Nevada and saw StinkE (with a capital E) I knew it was the perfect setting. Then, when I found out that a young reporter named Sam Clemens arrived in September 1862, I had my starting date! The cherry on the cake was when I discovered that the owner of our B&B on B Street was an expert on Nevada history. Carolyn Eichin pointed me towards so many good sources and contacts that I dedicated my second book to her.

PK Pinkerton is only 12. Is it a challenge to write from the viewpoint of such a young protagonist?
Not at all! I naturally write from that point of view because inside, I’m eleven years old! All my Roman Mysteries are written from a middle-school kid point of view, as well.

What do you enjoy most about writing for a young audience, and what has been your favorite part of being a published author?
My favorite part has been the incredibly enthusiastic response of young readers around the world. When I was in New York for the Edgars last week, I visited Town School on the upper East Side. The fourth grade teacher Mr. Pearl has championed my books since he first heard me speak in London ten years ago. I am a celebrity at his school! Here are just a few of the wonderful thank you notes they gave me. (see picture)

What are a few of your favorite authors? Have you read any good books lately that you’d recommend?
Ten books I’ve enjoyed during the past year are Naples 44 by Norman Lewis, Life After Life by Kate Atkinson, Half Bad by Sally Green, The Goldfinch by Donna Tartt, The Fault in Our Stars by Jon Green, The Ocean at the End of the Lane by Neil Gaiman, A Street Cat Named Bob by James Bowen, Rock War by Robert Muchamore, Into the Woods by John Yorke and Homer’s Iliad, which I’ve fallen in love with all over again.

I noticed in your bio that you love movies. Seen anything good recently? Anything you’re looking forward to?
I just saw Pompeii and thought it was good cheesy fun. Last year I adored Silver Linings Playbook and have blogged about its structure in detail*. I also enjoyed Despicable Me 1 & 2. However, for me television is the current star of visual storytelling. I have loved Breaking Bad, Game of Thrones, House of Cards, Orange is the New Black, The Good Wife, Parenthood and now Fargo.

What’s next for you?
Sadly, I think P.K. Pinkerton is just too politically incorrect for this terrible age of shootings in schools so I am abandoning it to try out two new projects, both based in the Mediterranean and using my background in Greek and Latin. One is a contemporary middle school kids’ detective series with an archaeological theme and the other is a re-telling of Virgil’s Aeneid for YA readers.

About PK PINKERTON AND THE PETRIFIED MAN:
The second book in a rip-roaring adventure series set in the wild west!

After escaping the ruthless desperados, P.K. finally feels safe in Virginia City and is ready to set up a new private eye business. But all the mysteries in town seem to be pranks—until the day P.K. meets a young maid named Martha. Martha’s employer has been found dead . . . and now the killer is after her. The mystery takes a grave turn when Martha disappears, so P.K. consults Poker Face Jace, an expert at people reading. With his help, P.K. inspects saloons and billiard rooms, and even tries sneaking into the coroner’s office. But time is quickly running out for P.K., and Martha’s life has never been in more danger.