Please welcome Yolanda Sfetsos back to the blog! The 4th book in her Sierra Fox series, TORN FROM THE SHADOWS, just came out, and she stopped by to answer a few of my questions! 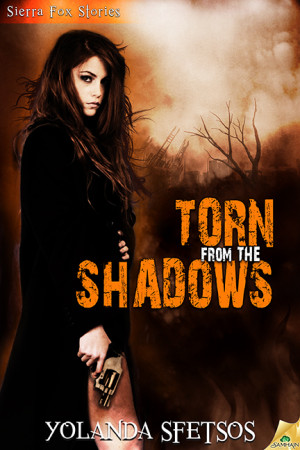 I can’t believe the 4th book in your Sierra Fox series is already out! Will you tell us a little about TORN FROM THE SHADOWS?
I know, I can’t believe it either but it’s so exciting. Well, six months have passed since the events of ON PINS AND NEEDLES and Sierra has been getting to know her half-sister. She’s also been busy working, and really enjoying an intense relationship with her sexy werewolf. 😉

However, she knows that it’s only a matter of time before trouble returns and is still very paranoid. After all, she might have interfered with the messed up plans the Obscurus have for her, but she knows they won’t stop trying. Sierra might seem a little too suspicious, but she’s got a right to be because in this book, her life changes even further.

What do you enjoy most about writing the character of Sierra Fox, and how would you say she’s changed the most since A PATCH OF DARKNESS?
I love writing Sierra. Her voice is very strong, so whenever I sit down to write another one of her stories it flows really well. I also enjoy spending time in her dangerous world, and the other characters are like a bunch of old friends that I look forward to hanging out with. We’ll just ignore the fact that I also tend to torture them.

Sierra has changed quite a bit since A PATCH OF DARKNESS. Back then she was just a spook catcher trying to run her own business with a loudmouthed assistant and a lot of outstanding cases. She was slowly paying off a debt to an organization she despised and was dating someone she thought she could trust, even if her heart longed for someone else.

Now, her world has opened up. Not just because she knows there are creatures worse than spooks out there, but also because she’s discovered so much more darkness than she expected—and some of it is her own. Her power has grown, and a secret family legacy keeps getting bigger. She also started out as a bit of a loner, and was happy just to go home and share a place with the ghost of her grandfather. But now, she’s got a lot of friends and more family than she knew about so that’s forced her to become a stronger, more tenacious person who is willing to do whatever it takes to keep everyone safe.

Sierra Fox has a lot more to lose now than she ever did.

Some folks think that the main character is an author’s favorite to write, but is there another character in the Sierra Fox series that you really enjoyed writing about as well?
Oh, definitely. I love writing Papan and Lavie. I also get a kick out of writing Ebony because she’s a goofball, and so frustrating.

I have to admit that they’re all lot of fun to write about.

What is your writing process like? Are you a plotter or a pantser?
I’m mostly a pantser who takes a LOT of notes before, during, and even after writing the first draft. I let the story simmer inside my head for a while and get stuck into research before I start. When I do this I find everything starts taking shape. It doesn’t take long for the story to spill out. LOL.

Although, I have to admit that writing this series has turned me into a bit of a hybrid. I mean, it’s hard to write a story arc that spans five books if you don’t at least have a general idea of what’s going to happen and where it’s going to end. So there’s got to be some sort of planning for a project like this. I don’t really like outlines, but I do put together a list of Things To Happen. Some are very detailed, while others are nothing more than a sentence.

I love how the process evolves a little more with each book I write.

TORN is the penultimate book in the series. Do you think it will be a bit bittersweet for you to wrap up the series? Are you excited to move onto something new?
OMG, it’s definitely bittersweet. Writing the fifth book was hard. Not just because so many awful things happen in the final instalment, but also because I didn’t want to let go of this world and the characters I’ve grown to love.

At the same time, it was great to reach The End.

So bittersweet is the perfect way to describe how it feels to end this series.

Yes, I’m excited about starting something new because I’ve got a bunch of ideas I want to tackle…

Speaking of something new, what have you got coming up next? Is there anything else you’d like to share?
Well, as far as writing goes, I’ve got a bunch of ideas for other urban fantasy stories that I need to sort out. Plus I’ve got three more instalments I want to write in my SFR series called, Recast. Oh, and did I mention that Sierra’s story might be over but I still plan to spend more time in her world, but with other characters? Yeah, I’ve got a few spin-offs in mind.

And of course, I’ll be writing and planning a bunch of exciting new writing projects.

About TORN FROM THE SHADOWS:
Sierra Fox, Book 4

Sierra Fox knows better than to believe the demon-obsessed freakshow has given up on her. She’s settled into a nice routine of living with her sister, enjoying her relationship with a sexy werewolf, and staying on top of work—and always waiting for the other shoe to drop.

Predictably, things start falling apart as she’s suddenly swamped with surprise visits and unwanted advances, and someone she despises wants her help.

When a spook-catching training session goes horribly wrong, she encounters a man who’s not quite as dead as she’d hoped. Mace is now more than human and still determined to get his hands on her. But not if Sierra accepts the strengthening gifts her grandmother bestowed at her birth.

Having the good guys put a price on her head is enough to ruin anyone’s day, but Sierra refuses to give up or give in. Even if it means exercising the last option on earth she wants. But claiming the ultimate power may not be enough to save the man she loves before his werewolf past destroys him.

Warning: Phantasms, pookas, werewolves, and demons, oh yes! And a spook-catching heroine who must choose to take what’s rightfully hers—even if it means walking the shadows with a demon.