Interview (& Giveaway): Marie Brennan, author of The Tropic of Serpents

It’s always a pleasure to have Marie Brennan on the blog, and today she’s here to talk about her new book, THE TROPIC OF SERPENTS, and we’ve also got a copy to give away to one lucky winner! Please welcome her back to the blog! 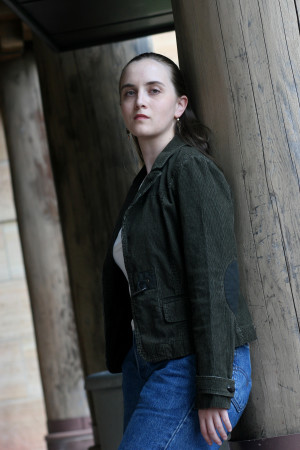 The Tropic of Serpents just came out, and I’m sure fans are eager to learn what Lady Trent is up to in this installment. Will you give us a bit of a teaser?
Isabella goes to a tropical region based on West and Central Africa, where she has to deal with a big-game hunter, an invading army, and quite a lot of unpleasant diseases!

When you started the series, did you already know how many books you wanted to write, or did you just plan to see where Lady Trent took you?
The very earliest parts were written with no particular plan in mind — roughly the first quarter or so of A Natural History of Dragons — but by the time I pitched the concept to my editor at Tor, I knew I wanted to aim for a five-book series.

What kind of research have you done for the series?
Some cultural, some biological: everywhere Isabella goes is inspired by a real-world place, so I do some reading to ground myself in the kind of society to be found there, but I also research a lot of stuff to do with animals and environments. I have a climatology textbook on my shelf so I can make certain the ecology makes sense for the region.

What is your writing process like? Are you a plotter or a pantser?
Somewhere in between. I’ll have a few notions in mind for things I want to have happen later on in the story, and then as I write my way through the book I’ll steer for those fixed points. 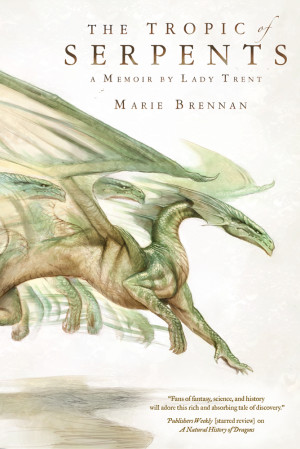 Worldbuilding is very important in this series. What are a few of your favorite literary “worlds?”
I drew a sort of indirect inspiration from Sarah Monette’s Doctrine of Labyrinths series. Monette does a beautiful job of dropping gratuitous references to invented historical figures and works of literature and so on, little details of culture and folklore, which has the effect of making her world seem very real. The anthropologist in me admires that tremendously, and tried to achieve a similar effect with this series.

What do you enjoy most about writing about Lady Trent, and why do you think readers connect with her?
I love her narrative voice, because it turns absolutely everything about the story into characterization: description, exposition, all of those things get processed through her view of the world, which means that even when I’m describing the insect life of a jungle to you, I am also telling you more about Lady Trent. Her voice also allows me a degree of reflexivity that you can’t ordinarily get away with in fiction: she will call herself out on some of her mistakes, and that lets me draw attention to the things she doesn’t call out. I think that reflexivity is a large part of what readers are responding to, because they recognize in her a lot of their own doubts or regrets or moments of gleeful satisfaction.

Have you read any good books lately?
I’ve very much enjoyed the Katya Hijazi and Nayir Sharqi series by Zoe Ferraris. They’re totally non-speculative — they’re mysteries set in Saudi Arabia — but transplanting the familiar structure of a mystery to a society where custom interferes with a lot of the investigative methods we’re accustomed to seeing makes for a very fresh spin. (For example, Nayir can’t question half the possible witnesses in the first book because they’re women and he isn’t related to them.)

What’s next for you?
I’ll be revising the third book of the Memoirs soon — Voyage of the Basilisk — then launching into the fourth one, which has no title yet.

1.) You MUST fill out the form below (if you’ve signed into Rafflecopter before, it will remember you!)
2.) Giveaway is for 1 copy of THE TROPIC OF SERPENTS by Marie Brennan to 1 winner
3.) Giveaway is open to all those with a US mailing address
4.) You must enter on or before 4/11/14
5.) Giveaway book courtesy of Tor
6.) Please see my Giveaway Policy.

About THE TROPIC OF SERPENTS:
The thrilling adventure of Lady Trent continues in Marie Brennan’s The Tropic of Serpents . . .

Attentive readers of Lady Trent’s earlier memoir, A Natural History of Dragons, are already familiar with how a bookish and determined young woman named Isabella first set out on the historic course that would one day lead her to becoming the world’s premier dragon naturalist. Now, in this remarkably candid second volume, Lady Trent looks back at the next stage of her illustrious (and occasionally scandalous) career.

Three years after her fateful journeys through the forbidding mountains of Vystrana, Mrs. Camherst defies family and convention to embark on an expedition to the war-torn continent of Eriga, home of such exotic draconian species as the grass-dwelling snakes of the savannah, arboreal tree snakes, and, most elusive of all, the legendary swamp-wyrms of the tropics.

The expedition is not an easy one. Accompanied by both an old associate and a runaway heiress, Isabella must brave oppressive heat, merciless fevers, palace intrigues, gossip, and other hazards in order to satisfy her boundless fascination with all things draconian, even if it means venturing deep into the forbidden jungle known as the Green Hell . . . where her courage, resourcefulness, and scientific curiosity will be tested as never before.