As you probably know, John Hornor Jacobs is one of my favorite authors, and his new book, The Shibboleth (2nd in a series after The Twelve-Fingered Boy), just came out. John was kind enough to let me catch up with him about the new book, and more! 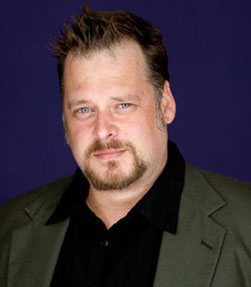 Ok, it’s been way too long and we’re more than overdue for some catching up! I loved THE TWELVE-FINGERED BOY and am very excited for its follow-up, THE SHIBBOLETH. Miriam Webster gives a few definitions of “shibboleth”, one being that it’s used to describe a myth or saying that’s generally regarded to be without real meaning (among a few other meanings.)Why did you choose this rather awesome, and unique, title?
My original title for this novel was Incarcerado, a rather glib phrase that Shreve uses as a refrain in the first novel in the series, The Twelve-Fingered Boy. However, Incarcerado was too similar to Incarceron, another YA novel about a prison planet, so my editor and I had a chat and he suggested The Shibboleth.

As far as the word itself, “shibboleth”, in everyday parlance it is often used to indicate a common phrase. It has Hebrew roots. I think it meant “grain” originally, but after a battle, the ability to pronounce the word correctly was used as a sort of password, a point of authenticity. In my novel, I’ve perverted the meaning even more. It has come to represent the extra-natural ability that Shreve and his nemesis share.

Quincrux, the antagonist of the novel, has placed a memory inside a bull guard at the Casimir Pulaski Juvenile Detention Center for Shreve, knowing that Shreve will tinker around in the man’s head and discover it.

“No, I do not even need to be with you to know your answer. There are certain shibboleths to our condition –

I’m shocked, and that’s not easy.

Out. Out of the bull, disembodied, looking down at him, his body now a loose, ungainly collection of bones and muscles. His expression is vacant, abject. Quincrux has infested this man with his memory. The bull—his name is Alex Schneider—is just a letter, a message, a package wrapped in a uniform and addressed to me. 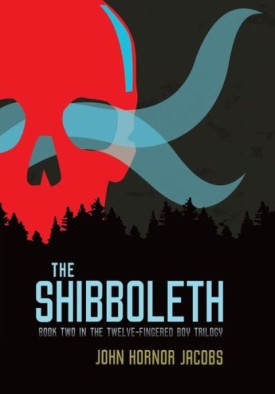 And when I hear the word shibboleth, something shifts in me, a sudden understanding. Shibboleth.

I know what the word means in a raw way, more penetrating than how he just tossed it off. It has such weight in his mind, I can tell by the trill in his voice, how his mouth moves around the sounds, even in the bull’s second-hand memory. It’s what we share, this thing, the shibboleth, between him and me beyond that, between me and the rest of mankind—the common utterance, the universality of mankind’s thoughts.

This ability I have is the shibboleth.”

Anyway, my editor said the novel should be called The Shibboleth. I argued against it. It is a weird word, it’s hard to pronounce, no one knows what it means. It would be death for sales. He said, “And yet, it is the perfect title for the book. That’s undeniable.” So, we went with it. Andrew Karre, my editor on this series, is much more fearless than I am.

My youngest daughter calls it The Shiver Left, knowing how much that bothers me.

At the end of THE TWELVE-FINGERED BOY, our heroes, Jack and Shreve, were both, in different ways, very much imprisoned. Without spoilers, of course, what can we expect from the boys this time around, and will you tell us more about the Society of the Extranaturals?
In The Shibboleth, we learn more about Quincrux, his mission and organization and obscure desires. We also learn more about “the incident in Maryland” that left him weakened. We learn about the Riders, the presences behind the eyes of “impenetrables.” We learn some of what the Riders want, and we learn what the presence in Maryland signifies.

And we learn a lot about Shreve and how fucked up the poor kid is.

Both boys discovered they each had some pretty amazing powers in the first book. What made you decide on their prospective abilities? If you could have a “super”, what would it be?
Superpowers are wish fulfillments, essentially. So, if I could choose a superpower, it’s almost tantamount to saying “You have one wish, what do you wish for?” Do I choose something that satisfies me personally or do I choose something that helps mankind? Or, destroys it? 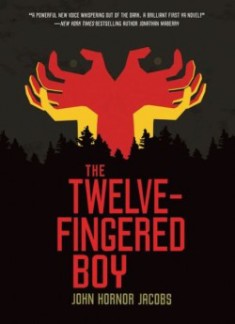 In many ways, The Twelve-Fingered Boy and The Shibboleth are my efforts to destroy the wish-fulfillment aspect of superhero stories.

But to take your question seriously, if I could have a superpower, it would be to be to awaken superpowers in other people (a theme I touch on in The Shibboleth). I think I’d try to only grant superpowers to those deserving of it, rather than those solely desirous of it. And consequently do good for the world.

How would you say Shreve and Jack have grown since the first book?
Jack has become an adult, and Shreve has done a lot of bad things and had to grapple with his conscious and a shitload of extra-natural bullshit. Shreve has been broken by circumstance. “The world is a monster,” he says, and it is, especially to him. One of his greatest fears is that he is the monster, that he’s becoming Quincrux.
I really don’t take it easy on the kid.

What have you enjoyed the most about writing for a younger audience? What have you found challenging?
The most rewarding things about writing for adolescents is that I’m still very much aware of the issues I had then, in my teens (not gonna tell you how long ago that was… okay, twist my arm, just a couple of years ago 😉 and writing about them has proven a sort of catharsis. It’s also informed the way I look at my daughters, especially the oldest, who is now thirteen and surly.

The most challenging thing about these books are the constant fret and conflict between the physical who we are and the who we are without flesh. There’s a metaphysical dialogue that occurs, in Shreve’s head, constantly. He is a bugfuck, which is to say, he’s a telepath. Not only can he control people, he can enter their minds and experience their history. After a certain point, his ability to discern where his identity ends and others begin has eroded to the point that all his histories, everyone he’s ever touched, crowd his mind.

This development in Shreve mirrors the development of adolescents (and even adults). Who am I? When do I stop being an extension of my parents and be my own person? What are my values? What is my voice and what do I stand for? What makes me different from everyone else? Why should I not be like all those people around me? Why should I not conform?

There’s a reason the last book in the series is called The Conformity.

But Shreve answers these hard questions in his inimitable way. But it is painful, much like adolescence is painful.
And in this way, The Shibboleth isn’t really a gentle, feel-good book. It’s dense, and full of conflicted emotions, and hard lessons. 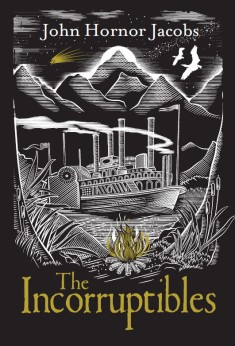 What would you like to see readers take away from the books?
A burning desire to buy more of my books.

Oh, sure, I’d also like those teens that read it to understand that it’s not easy for anyone, and that everyone makes mistakes. That the weight of your past shouldn’t define you. And that figuring out who you are is something you’ll grapple with all your life, if you have any modicum of self-awareness.

How about you, read any good books or seen any good movies lately? Were there any standout titles for you in 2013?
I hated almost every movie I saw last year, with the exception of a couple. Look, I’m a guy who has written a book about kids with superpowers, I’ve written a book about zombies – so I LIKE speculative elements – but when I walked out of Man of Steel, I really felt like I’d be fine if I never saw a movie with a superhero again. Iron Man 3 was a jumbled mess. I can’t remember what I saw before that. The Hobbit was fucking ridiculous, even for someone who hasn’t read the book but I have many times (first book I ever read, thanks for taking a dump on my 8 year-old self, Peter Jackson, you filthy bastard). Pacific Rim was poor, but had a couple of things going for it, and maybe that’s why everyone got so excited about it – it didn’t totally suck!

The best movie I saw last year was The Way Way Back followed closely by The Kings of Summer. Both coming of age movies.

As far as television goes, I was very surprised at how well Sleepy Hollow and Almost Human turned out.

I didn’t read a lot of novels – and no one wants to hear about non-fiction because it always sounds like the person is trying to prove how smart he or she is – but the standouts were Scott Lynch’s Lies of Locke Lamora, Daniel Polanski’s Low Town, and Myke Cole’s wonderful Control Point. All of these are remixes of what you might think of as traditional fantasy.

With THE SHIBBOLETH, you’ve got four titles under your belt (soon to be five, with THE INCORRUPTIBLES), as well as numerous short stories. Recently, I asked a few debut authors about what things they’ve learned since being published. What are a few things you’ve learned, and what advice would you give to an aspiring writer?
A few things I’ve learned. Huh.

You know how when you were a teenager and you’d take the SAT and ACT and they’d always tell you to go with your first choice? I’m learning that my narrative instincts are normally pretty on target and to not overthink things. But I’ve also learned that I can take my time and try to be less terse when it comes to plotting, pacing, and descriptions. I’m trying to write bigger worlds, bigger stories, with more characters and more details, so I need to be able to have a number of styles.

If I was advising an as-yet-unpublished writer, I’d say to write what interests you. The creation of a novel takes a long ass time, months if not years, and if you don’t get excited about the story you’re telling – if it’s not a book you’d like to read – what’s the point?

What’s next for you this year?
The Incorruptibles drops in the UK on August 14th, this summer. Hopefully, we’ll know soon who’ll publish it in the US. I’m wrapping the second novel in The Incorruptibles series very soon and will be laboring to finish the last book in the coming months. In 2015, The Conformity will be published, wrapping up the story of Jack and Shreve.

After that? Who knows what I’ll write. What I do know is that it will be a standalone novel. I’m good on series for the time being.

About THE SHIBBOLETH:
“There are certain shibboleths to our condition.”

At the end of the first book of The Twelve-Fingered Boy Trilogy, Jack and Shreve are incarcerado—physically locked up. Shreve’s back in the custody of the state of Arkansas, and Jack’s somewhere in the clutches of Mr. Quincrux—both problems Shreve aims to rectify.

Cages might hold Shreve’s body, but the power that’s been growing since his encounter with Quincrux has reached a pinnacle. Nothing can prevent his mind from scaling the etheric heights. Freed from his body, Shreve discovers the magnitude of the evil that’s stirring in the east. The wave of insomnia that’s paralyzed the nation is only the beginning.

To save Jack—and maybe all of the humanity he no longer feels part of—Shreve has no choice but to join Quincrux and the Society of Extranaturals.